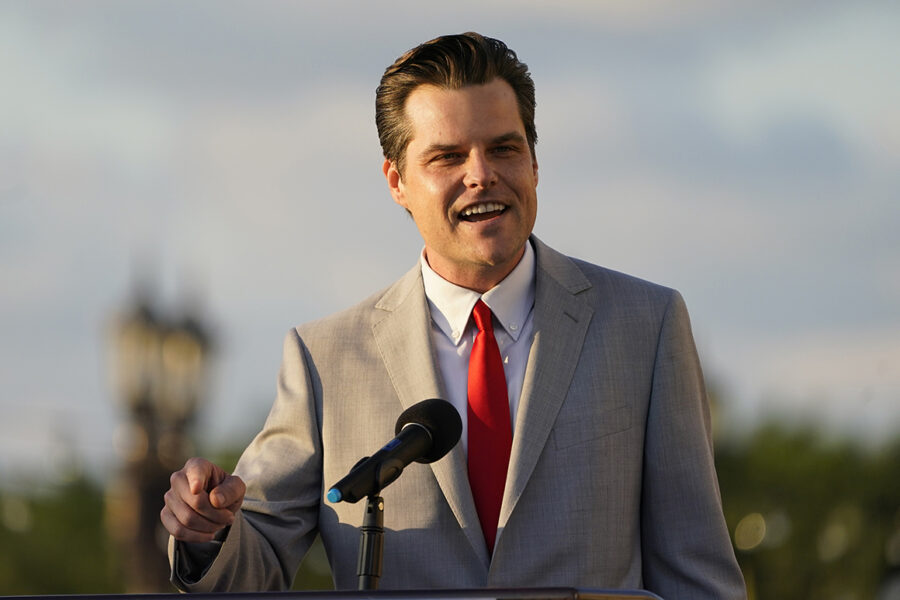 Matt Gaetz is facing a federal investigation into sex trafficking allegations, turmoil inside his congressional office and a flurry of unsavory reports about his conduct toward women. But his position inside the House GOP conference is safe — at least for now.

While top Republicans acknowledged the serious nature of the allegations surrounding Gaetz, just one sitting GOP lawmaker has so far publicly called on him to resign: Rep. Adam Kinzinger of Illinois. Instead, Republican leaders on Tuesday were quick to defer to the ongoing Justice Department probe, noting that the Florida Republican would automatically lose his committee assignments if he were indicted.

House Minority Whip Steve Scalise (R-La.) said he needs to see “what the facts are” and pointed out there hasn’t “been any formal DOJ action yet,” but added that “obviously we’re watching it close.”

House Minority Leader Kevin McCarthy (R-Calif.), who last week called the accusations “serious,” declined to say whether Gaetz should step down if the claims are true. “These are hypotheticals,” he told POLITICO in the hallways. “We will deal with everything as they come.” McCarthy also indicated he planned to talk to Gaetz at some point, but it’s unclear whether the two have connected yet.

And while House GOP Conference Chair Liz Cheney (R-Wyo.), the highest-ranking Republican woman, called the accusations “sickening” during a Sunday interview on CBS, she told POLITICO Tuesday that “I am not going to comment on it anymore, but thanks for asking.” Gaetz is one of Cheney’s chief antagonists in Congress; he even flew to Wyoming earlier this year to troll her at a campaign-style rally.

The restraint from GOP leadership — which came as lawmakers returned to Washington for the first time since the news broke that the DOJ is looking into Gaetz — suggests it’s unlikely that Gaetz will suffer any intra-party consequences until the investigation is complete.

Still, as members trickled into the Capitol Tuesday, many rank-and-file Republicans were desperate to avoid talking about the Florida firebrand, with some pulling out all the stops to avoid reporters’ questions.

Rep. Tom Cole (R-Okla.) said bluntly that he didn’t “want to be drawn into talking about that.” One GOP lawmaker jokingly pretended to not to see reporters in the hallway. Another Republican, when asked about Gaetz, sarcastically responded: “Who?”

Gaetz could face a reprimand from the House Democratic majority, which moved to strip Rep. Marjorie Taylor Greene (R-Ga.) of her committee assignments earlier this year for incendiary rhetoric. But even House Speaker Nancy Pelosi has signaled hesitance about going down that path, instead putting that responsibility on McCarthy’s shoulders.

“I think there’s been a clear violation of [House rules], but it’s up to the Ethics Committee to investigate that and it’s up to the Republican leader, Mr. McCarthy, to act upon that behavior,” Pelosi said on CBS’ “Face The Nation” this week when asked about Gaetz.

The New York Times first reported that the DOJ is looking into Gaetz’s alleged sexual relationship with a 17-year-old and whether he violated sex trafficking laws or paid women for sex using online payments. The probe started under the Trump administration. The House Ethics Committee is also investigating a litany of allegations, including a CNN report — confirmed by POLITICO — that Gaetz showed his colleagues nude pictures and videos of women in his phone.

So far, Gaetz has remained defiant and denied any allegations of wrongdoing. As he entered and exited the Capitol on Tuesday, Gaetz deflected reporters’ questions about the investigation and instead highlighted an attempt by conservative group Project Veritas to undercut CNN’s credibility.

The general reluctance to admonish Gaetz, even among some of his biggest foes, comes as GOP lawmakers and even some Democrats have called on New York Democratic Gov. Andrew Cuomo to resign in the wake of multiple sexual harassment allegations. But Republicans say Cuomo’s case is different because the New Yorker’s accusers were on the record.

“With Gaetz, it’s just hearsay. If you had multiple 17-year-olds coming out and saying ‘he paid me to travel with him,’ I think that it’d be different,” said one GOP lawmaker, who only would discuss the allegations on condition of anonymity.

“It looks terrible,” the member added. “But again, we don’t know if it’s true or not.”

Still, Republicans are coming under increasing pressure to distance themselves, and their party, from Gaetz. At least two GOP moderates have so far returned or donated contributions that they received from the Florida Republican, a sign that ties to Gaetz could be toxic in key swing districts. A third Republican, freshman Rep. Mike Garcia of California, wants to let the legal process play out, but said if Gaetz is indicted or resigns, he would donate the campaign funds to a women’s shelter.

“If somebody broke that law, then they would be facing time in prison,” said Rep. Brian Mast (R-Fla.). “But, what I would say to you is simply this: Matt gets his due process.”

Freshman GOP Rep. Maria Elvira Salazar, also from Florida, echoed a similar sentiment: “That investigation needs to be concluded … Everybody is innocent until found guilty. So let’s wait.”

This isn’t the first time McCarthy and his leadership team have had to grapple with fringe members in their ranks. Greene was kicked off her committees by Democrats for her past inflammatory rhetoric; she has also caused headaches by forcing a series of procedural votes on the House floor.

It could be equally hard to rein in Gaetz, a conservative gadfly who gained popularity with the MAGA crowd by fashioning himself as a “warrior” for former President Donald Trump and regularly appearing on Fox News. Adopting the Trump playbook on scandals, Gaetz stated in a recent op-ed that he “absolutely” won’t step down from Congress and blamed the allegations on the “deep state” and “fake news” media at a weekend event in Florida.

“I won’t be intimidated by a lying media, and I won’t be extorted by a former DOJ official and the crooks he is working with,” Gaetz said at the gathering, organized by the pro-Trump group Women for America First. “The truth will prevail.”

While almost no Republicans have called on Gaetz to resign, very few have rushed to defend him, either. Rep. Jim Jordan (R-Ohio), a Trump acolyte and the ranking member on the House Judiciary Committee, was one of the lone Republicans who said he believes Gaetz and thinks he should keep his plum seat on the Judiciary panel.

Gaetz already had few friends and a less-than-sterling reputation on Capitol Hill, leaving him short on political capital. And two congressional aides have resigned from Gaetz’s office amid the steady stream of allegations and unflattering news stories about their boss. The women of his office released a statement defending Gaetz, though it was left unsigned.

It’s unclear what Gaetz’s potential criminal exposure is. If he is indicted, he would have to forfeit his committee assignments under House rules. But he wouldn’t face mandatory eviction from the House GOP conference under that scenario. If Republicans wanted to push him out of their ranks, it would take a two-thirds majority — the same threshold required to expel a member from Congress.

There is recent precedent for indicted Republicans refusing to leave Congress and then winning re-election. Trump allies and former GOP Reps. Chris Collins (N.Y.) and Duncan Hunter (Calif.) both refused to step down after being indicted for insider trading and campaign finance violations, respectively, though they ultimately resigned when their legal troubles caught up with them.

But given the disturbing nature of the allegations surrounding Gaetz, some Republicans predict that it would be tough for him to survive politically if he is charged with a crime.

“I don’t think anybody should resign based on allegations. But if he did everything they say he did, he shouldn’t [be in Congress],” said another House Republican.

But, she added: “Any allegations like that are upsetting … Something as grave as that, I don’t care if you have an R or a D by your name, that should be prosecuted to the fullest extent of the law.”