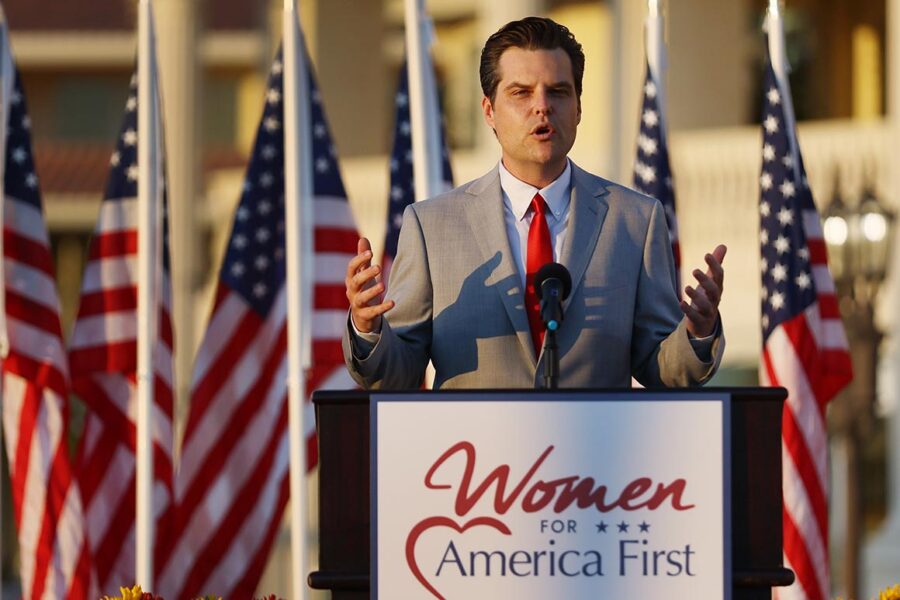 MIAMI — The group took off for their Bahamas weekend getaway on three separate flights. Most of the passengers, which included at least five young women, flew out of Orlando on two separate private planes. Matt Gaetz flew commercial.

The details of that September 2018 trip are sparse, but they are critical to the allegations against Gaetz, the Florida congressman currently the subject of a federal sex-crimes investigation that is threatening his career.

Gaetz, who has not been charged, has consistently denied the two anonymous claims against him: that he had sex with a 17-year-old girl and paid for sex.

Looking for a good Pizzaria?

Gaetz’s predicament as the subject of a serious investigation became clearer this winter when federal agents executed a search warrant and seized his iPhone, according to interviews with three people who were told of the matter by Gaetz, who changed his phone number in late December. Around that time, the sources said, federal agents also seized his former girlfriend’s phone before she went into work in the morning. She declined comment.

At the time of the 2018 trip, Gaetz was a top adviser to Republican Ron DeSantis, who was running for governor, and went on to manage his transition team months later. DeSantis has long been a top Gaetz ally but declined to comment on his legal woes Monday when asked by reporters.

In the Bahamas, Gaetz was joined by two GOP allies: Halsey Beshears, then a state legislator, and Jason Pirozzolo, a hand surgeon and Republican fundraiser for DeSantis, according to three sources, including one who was part of the group.

Also among those on the trip: the former minor who is key to the investigation, whose presence on the trip was previously unreported. According to one of the women in the group who spoke on condition of anonymity, everyone on the trip was over the age of 18 — including the woman in question, who had turned 18 years old months before the trip, she said.

The woman was born in December 1999, according to a personal website, but POLITICO has been unable to confirm the woman’s official date of birth.

No one on the trip engaged in prostitution, the source said.

But questions surrounding the ages of some of the women surfaced immediately upon their return — three of them looked so young when they returned on Beshears’ private plane that U.S. Customs briefly stopped and questioned him, according to sources familiar with the trip, including a woman on the flight.

As the investigation intensified this winter, Beshears abruptly resigned as Florida Department of Business and Professional Regulation Secretary, a post that made him the state’s top business regulator, noting he had contracted Covid-19. But he confided to two friends recently that he believes he’s the subject of the investigation, the friends told POLITICO.

Beshears refused comment and his lawyer did not return calls. Both the lawmaker and his former girlfriend declined to comment.

Conspicuously absent from the 2018 Bahamas trip was another official in their circle, former Seminole County Tax Collector Joel Greenberg, whose alleged criminal conduct sparked the wide-ranging investigation. Indicted last August for sex trafficking the underage girl in question — conduct federal authorities say occurred between May and November 2017 — Greenberg is currently in jail and reportedly contemplating a deal with federal prosecutors as he faces 33 charges including federal stalking and a host of financial crimes. In July 2020, as the full scope of his legal troubles were coming into view, Greenberg made a failed attempt to get politically connected friends to ask Gaetz to get President Donald Trump to pardon him, two of the friends told POLITICO.

Greenberg was not invited to the Bahamas, the three sources said, because of a conflict with Pirozzolo’s girlfriend. Pirozzolo, who recently told patients that his office was closed “due to a family emergency,” could not be reached for comment, nor could his lawyer or girlfriend.

The woman whose age is in question has also declined to comment on the case, in which investigators are also examining whether sex was explicitly exchanged for money or drugs. POLITICO is withholding her name because she is the alleged victim of a sex crime.

Before his indictment for sex-trafficking the underage girl, Greenberg told a mutual friend in an Aug. 14 WhatsApp chat last year that federal agents sought to speak to her, but she was unwilling.

“They contacted her and are wanting her to talk. She doesn’t want to talk to them,” he wrote to the friend.

The woman’s testimony would be crucial in a case against Gaetz — among other details, she can clarify her age when they allegedly had sexual relations. Three Gaetz friends told POLITICO that the lawmaker, who was single at the time, had told them he had sexual relations with the woman after she turned 18.

And as one of at least five women who went on the Bahamas trip with Gaetz, she could shed light on details that would be key to a prosecution under the Mann Act, which forbids transporting people of any age across state lines for purposes of prostitution. An attorney representing another target in the Greenberg indictment said investigators are examining the Bahamas trip in light of the Mann Act.

Such cases can be complicated, which is one reason prosecutors in Florida gave up more than a decade ago on filing federal charges against notorious pedophile Jeffrey Epstein. Federal prosecutors in New York did indict Epstein in 2019, but he died in jail weeks later, apparently by suicide.

Former federal judge Paul Cassell, a University of Utah law professor, cautioned that the statute “is largely in disuse but it still remains a theoretical option” for prosecutors.

Some of the women on the Bahamas trip entered the orbit of Gaetz and Greenberg through the SeekingArrangement website — a dating website that connects women with so-called sugar daddies — according to interviews with friends and associates who know the two men, and Greenberg introduced him to young women he met on the site. Gaetz said he’s never been on the site.

Lawrence Walters, a First Amendment lawyer in Orlando who has represented sugar daddy websites and clients accused of prostitution, said prosecutions in such cases can be difficult.

“Every type of dating relationship has an exchange of value. It’s largely why law enforcement hasn’t wanted to weigh into these sugar daddy-type relationships area because of that tremendous grey area,” Walters said, noting the distinction between “dating and exchange of value in a relationship vs. all-out commercial prostitution. We don’t have a lot of court rulings on that. Prosecutors tend to focus on very clear cases so they don’t get into these issues. But if they wanted to pursue a sugar daddy-type relationship, dating relationship, there are very thorny personal, societal and constitutional issues they have to deal with.”

Josh Gerstein contributed to this report.