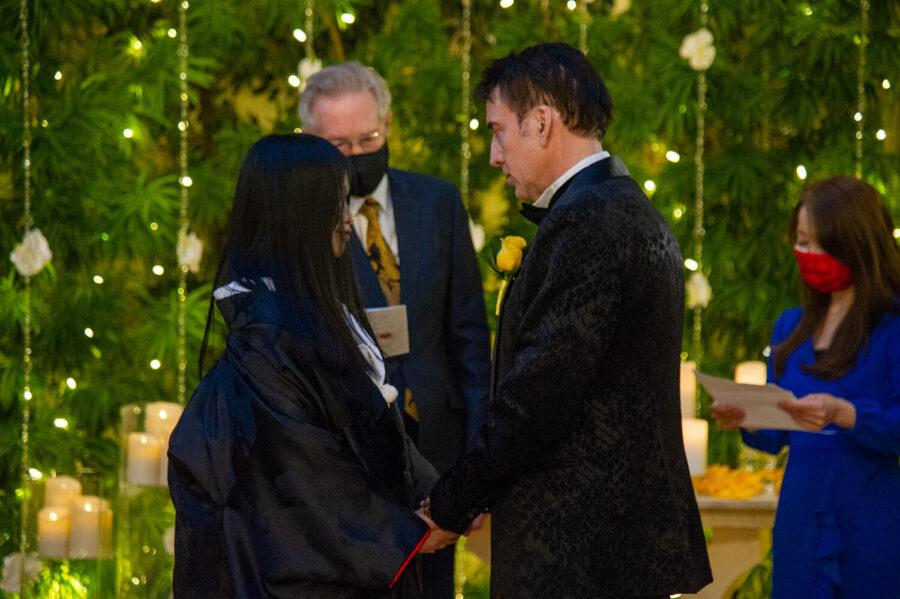 This marriage took place in a very small and intimate ceremony. In a conversation with PEOPLE magazine, Nicholas Cage has also confirmed this. He said, “Yes, it is true and we are very happy.” The news of Nicholas and Rico’s wedding was revealed on Friday.

By the way, Nicolas Cage and Rico Shibata married on 16 February in Las Vegas. This day was very special for Nicholas Cage. His team told People that the date was chosen to honor Nicholas’ late father.

Talking about Nicholas and Rico’s wedding outfits, Rico Shibata wore a handmade Japanese bridal kimono at the wedding. This three-layer kimono was of the Kyoto label. At the same time, Nicolas Cage chose the tuxedos made by Tom Ford for his special day.

In April 1995 Nicolas Cage married Patricia Arquette. They separated after nine months, but acted as a couple in public until Cage filed for divorce in February 2000. Patricia Arquette is an American actress. Primarily known for her work in films and television, Arquette is the recipient of various accolades, including an Academy Award, a British Academy Film Award, two Primetime Emmy Awards, three Golden Globe Awards, and two Screen Actors Guild Awards.

Lisa Marie Presley is an American singer and songwriter. After a meeting with Nicolas Cage at a party and Presley broke off her engagement with rocker John Oszajca. Lisa Marie Presley’s third marriage was to Cage. They were married on August 10, 2002. Cage filed for divorce on November 25, 2002, and the divorce was finalized in 2004.

Nicolas Cage met Alice Kim a sushi bar where she was working as a waitress. He Separated from his wife of 11 years Alice Kim.

In March 2019, Cage married Erika Koike in Las Vegas, only to file for annulment four days later. In June 2019, Cage was granted a divorce from Koike.

The bride Riko entered Kiro’s song Winter Song. Nicholas and Rico were married to traditional Catholic and Shinto customs. In this, both of them vied with each other by mixing “Haiku” in the poem “Walt Whitman”.

People.com has also shared photos of the wedding scenes of Nicholas and Rico. In it, you can see the beautiful alter decorated with fairy lights with backdrops with greenery. After marriage, a small celebration was held, in which Nicholas’s ex-wife joined.

Nicholas Cage‘s team said, “After the wedding, this happy couple made a small celebration, which included Nicholas’s ex-wife Alice and their son Cal.” Alice and Nicholas remain friends even after divorce. Let me tell you that Nicolas Cage and Rico Shibata met in Shiga, Japan. It has been more than a year for their relationship.

The post The 57 year old actor Nicholas Cage got married to a 31 year old Rico Shibata for the fifth time appeared first on USAThrill.