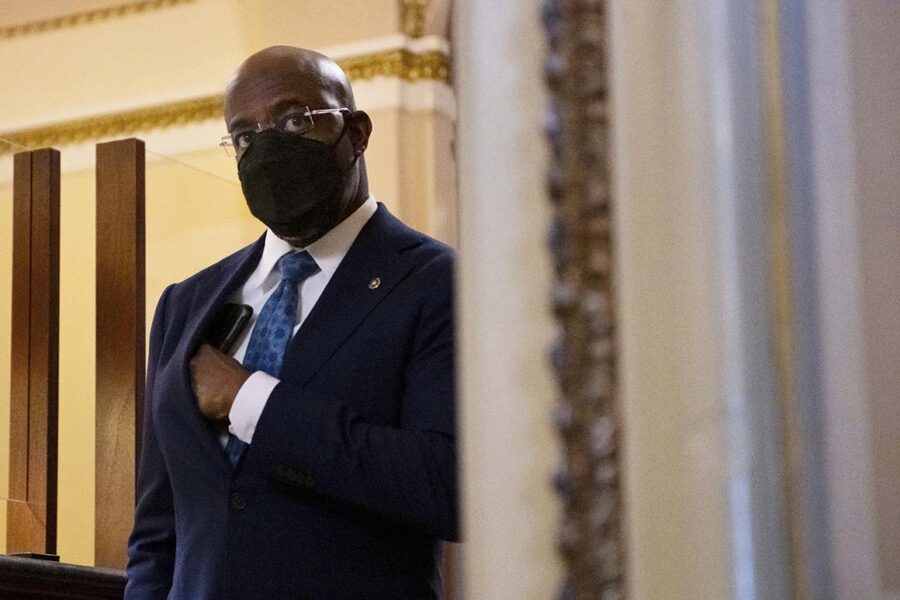 Democrats’ narrow majorities are in peril in next year’s midterms, and their most vulnerable members are seeing a major cash infusion early in the fight to keep Congress in their control.

The four swing-state Senate Democrats likeliest to face the toughest reelection fights — Raphael Warnock of Georgia, Mark Kelly of Arizona, Maggie Hassan of New Hampshire and Catherine Cortez Masto of Nevada — each raised more than $2 million, posting higher totals than any incumbent senator two years ago. All four had over $4 million in the bank, a total only two senators had at this point in 2019.

Meanwhile, House Democrats quickly assuaged any fears that they would struggle to keep up fundraising with their main antagonist, Donald Trump, out of office. Over two dozen of the 45 House Democrats that Republicans plan to target in 2022 raised over $500,000. Four of them, including California Reps. Katie Porter and Josh Harder, raised over $1 million — an impressive amount for the first quarter of an off-year.

But this isn’t the 2020 cycle. Armed with WinRed and an energized small-dollar donor base, House Republicans have narrowed their financial gap. Of their roughly three dozen most vulnerable incumbents, 15 raised over $500,000, a much stronger showing than in the first months of the 2019. That’s not a good sign for House Democrats, who had a huge money edge last cycle and still lost over a dozen seats.

Here’s our breakdown of the most important takeaways from the first-quarter financial reports on the fallout from the second Trump impeachment trial, the Jan. 6 riots and, most importantly, the 2022 battle for control of the House and Senate.

Warnock and Kelly, who became some of the best small-dollar fundraisers in the country during special elections last cycle, both raised more than $4.4 million, showing the benefit of fundraising networks that never went inactive.

Some Democratic challengers also had good quarters. Pennsylvania Lt. Gov. John Fetterman raised $4 million, cementing his frontrunner status in the Senate race there. But he also spent heavily, shelling out $2.1 million in the quarter. The vast majority of that was for his digital fundraising: more than $880,000 for email acquisitions and more than $577,000 for digital advertising, a bet on spending big early to build a small-dollar program that could pay off throughout the race. State Rep. Malcolm Kenyatta (the only other candidate in the race during the quarter), raised $374,000, a decent showing for a first-time statewide candidate.

Several other Democratic challengers posted strong early showings. Rep. Tim Ryan, who has not yet announced but is expected to run for Senate in Ohio, raised $1.2 million; in Wisconsin, Alex Lasry raised $1.1 million, while Tom Nelson raised $264,000; and in North Carolina, state Sen. Jeff Jackson pulled in nearly $1.3 million. The early fundraising suggests Democratic challengers will be well-funded — although both of those races are expected to get more crowded, creating expensive primary fights.

Vulnerable House Democrats kicked off the official start of the post-Trump era by continuing to raise large sums of money. Of the 45 incumbents on the National Republican Congressional Committee’s target list, 25 raised over $500,000.

And some 21 are starting the redistricting cycle with over $1 million in the bank. Porter ($11.5 million) and Rep. Josh Gottheimer of New Jersey ($9.2 million) have especially staggering high war chests.

But this cycle, Republicans aren’t too far behind. The quarterly totals of their endangered incumbents are almost as formidable. Of the 33 GOP members who are either targeted by the Democratic Congressional Campaign Committee or deemed vulnerable by the NRCC, 14 of them raised over $500,000, including Reps. Mike Garcia (R-Calif.), Ashley Hinson (R-Iowa), Young Kim (R-Calif.), Michelle Steel (R-Calif.) and María Elvira Salazar (R-Fla.). Only a handful of vulnerable Republicans cleared that margin in the first three months of the 2019 cycle.

A couple of the Republicans who most sharply condemned his behavior were also rewarded. Five of the 10 GOP members who voted to impeach Trump for his role in the insurrection that day raised over $500,000. The leaders were Reps. Liz Cheney (R-Wyo.) with $1.5 million; Adam Kinzinger (R-Ill.) with $1.1 million; Jaime Herrera Beutler (R-Wash.) with $745,000; and Anthony Gonzalez (R-Ohio) with $616,000.

Trump has promised to recruit and fund primary challengers against those 10 members who defied him, but so far only one of those challengers looks formidable. Max Miller, the Trump-backed challenger against Gonzalez, raised $508,000 — he self-funded over $50,000 of that, and it still wasn’t enough to best the incumbent. Cheney’s challenger, Anthony Bouchard, had the next highest total with $335,000.

Alabama is the first open-seat race where former President Donald Trump endorsed a candidate, backing hardline conservative Rep. Mo Brooks. Brooks’ fundraising doesn’t reflect his clear frontrunner status: He raised just $274,000, though he has $1.3 million on hand. But he’s got an expensive competitor in Lynda Blanchard, the former ambassador who loaned herself $5.1 million and has nearly $5.3 million in the bank. Blanchard has already started airing TV ads. Brooks could be an early test both for the fundraising effect of Trump’s endorsement — which came after the quarter ended — and for how the endorsement fares against a well-funded opponent.

Meanwhile, the picture in Ohio is murky since two self-funders entered the GOP primary after the quarter ended. But the earliest candidates both got a bit of a head start. Jane Timken, the former state party chair, raised $1.1 million and gave her campaign another $1 million, demonstrating some real fundraising ability for a first-time candidate and some willingness to self-fund. Meanwhile, Josh Mandel, the former state treasurer, raised $1.4 million into a joint fundraising committee that includes his campaign account and leadership PAC. Combined, he has roughly $5 million in the bank for a fight that is getting pricier by the day.

Alabama and Ohio are among five states where incumbent Republicans have already announced their retirements. But one of the biggest looming questions on the Senate map is whether others will join. And the senators who haven’t officially declared they’re running again had among the smallest quarters of any incumbents.

Sen. Ron Johnson (R-Wis.), who will be the most vulnerable Republican incumbent if he runs, raised $545,000 and had just $1 million in the bank. Republicans don’t necessarily see Johnson’s fundraising as a sign he’s decided against running. Johnson can self-fund to a degree, which would make up the difference if he chooses to invest his own money.

Sen. Lisa Murkowski (R-Alaska) raised just $381,000, and Sen. Chuck Grassley (R-Iowa) raised just $256,000. It’s notable to compare those figures to the first quarter in 2015, the last time both faced reelection. Murkowski this year raised roughly half her total from 2015; Grassley raised roughly one-third. But both senators had close to the same cash on hand as six years ago, so it’s not a clear sign of their intentions yet.

Other Republican incumbents who could face tough races had much better quarters, by comparison. Sen. Marco Rubio (R-Fla.) raised $1.6 million and has $3.9 million on hand.

Several states are beginning to feel the redistricting squeeze. By the end of this month, a few of the smaller delegations might be playing musical chairs as one of their seats disappears.

Nowhere is this predicament more acute than in Rhode Island, which has two Democratic incumbents and is set to condense into one at-large seat. Rep. David Cicilline raised $655,000, to Rep. Jim Langevin’s $118,000. While Langevin has nearly $780,000 in the bank, his meager first-quarter number doesn’t suggest he’s readying for a member-on-member battle. Cicilline’s war chest is $1.1 million.

Keep an eye on West Virginia. The state is shedding its third district, and most Republicans in the state expect GOP Reps. David McKinley and Alex Mooney to get drawn in together, while Republican Rep. Carol Miller is untouched in the south. McKinley has just $400,000 banked, compared to Mooney’s $2.4 million.