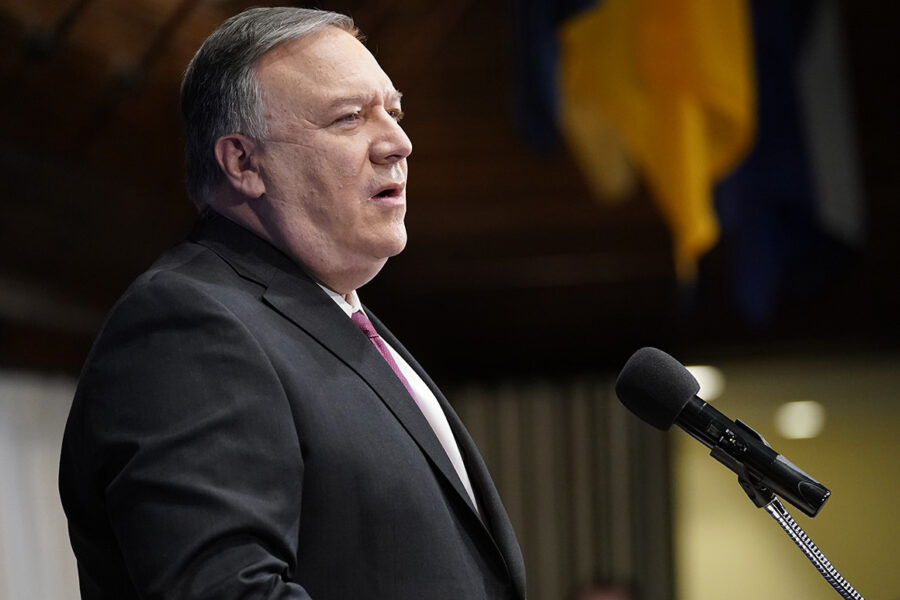 Former Secretary of State Mike Pompeo violated federal ethics rules governing the use of taxpayer-funded resources when he and his wife, Susan, asked State Department employees to carry out tasks for their personal benefit more than 100 times, a government watchdog has determined.

POLITICO obtained a copy of the report on the Pompeos, which was put together by the State Department’s inspector general’s office.

The report has been long awaited in Washington, where Pompeo is seen as a potential 2024 Republican presidential contender. The investigation into his and his wife’s actions came to light last year after Pompeo engineered the firing of Steve Linick, then the inspector general of the State Department.

By digging through emails and other documents and interviewing staff members, investigators uncovered scores of instances in which Mike or Susan Pompeo asked State Department staffers to handle tasks of a personal nature, from booking salon appointments and private dinner reservations to picking up their dog and arranging tours for the Pompeos’ political allies. Employees told investigators that they viewed the requests from Susan Pompeo, who was not on the federal payroll, as being backed by the secretary.

Not all of the 100-plus instances were definitively found to constitute a rules violation.

Mike Pompeo, in an interview with investigators, insisted that the requests were often small and the types of things friends do for friends. His lawyer, William Burck, slammed a draft version of the report he received as a politically biased “compilation of picayune complaints cherry-picked by the drafters.”

The inspector general’s office, however, defended the investigation, noting that many of the rules governing such interactions are clear, do not make exceptions for small tasks, and that the Pompeos’ requests ultimately added up to use a significant amount of the time of employees paid by taxpayers.

The tasks the staff members were assigned varied widely.

Susan Pompeo, for instance, asked staff members to buy a T-shirt for a friend; arrange for flowers to be sent to friends recovering from sickness; and help her book hair salon appointments when she was in New York during the U.N. General Assembly and had to meet with foreign dignitaries. One year, a senior adviser to the secretary and a senior Foreign Service officer came in on a weekend “to envelope, address, and mail personal Christmas cards for the Pompeos,” the report states.

State Department staff members also found themselves given more intense assignments, such as planning events, including for groups with which the Pompeos were affiliated but in a non-governmental capacity.

The apparently personal Pompeo tasks required time either when they were on-duty or off-duty, the report states. The Pompeos did not separately compensate the staffers for the non-State Department-related work, the report states.

The report extensively mentions the personal tasks handled by one State employee, using only the title “senior adviser,” but its description of her background matches that of Toni Porter, who joined Pompeo at Foggy Bottom as a senior adviser after working for him when he was in Congress and head of the CIA.

Mike Pompeo described Porter to investigators as a longtime friend of his family, but Porter told investigators that, “for the most part, she believed she was performing the tasks described in this report as a part of her official duties.” Many of the requests Porter handled were clearly related to State Department business, but others did not appear to be.

Porter was tasked with many of the apparently personal requests. Investigators found that “on an almost daily basis since the start of the senior adviser’s employment, Mrs. Pompeo would email the senior adviser’s official department email account, asking her to undertake various tasks.”

According to the report, Porter “spent time over three months preparing for a June 2019 visit to Washington, D.C., by the Kansas Chapter of the YPO (formerly the Young Presidents’ Organization), an organization of which the secretary was a member.”

In asking for Porter’s help, Susan Pompeo “stressed the prior political support of several members to Secretary Pompeo’s campaigns for the House of Representatives, but did not reference any connection between the visit and Departmental business,” the report states.

“For example, Mrs. Pompeo’s list noted that one attendee ‘was one of Mike’s biggest supporters during his years in Congress, hosting the single largest fundraiser held by Pompeo for Kansas,’ while another attendee ‘sat on the Pompeo for Kansas Finance Council.’”

Porter “arranged events for the trip participants, including arranging tours of various museums, as well as a visit to the Library of Congress and the U.S. Capitol.”

The State Department did not pay for the tours or other events arranged for the outside organizations with which the Pompeos were associated, investigators note. They argue, however, that that is only more evidence that the events were personal and should not have been handled using State Department employees.

Their report also points to provisions in federal regulations, such as from the Standards of Ethical Conduct for Employees of the Executive Branch, which states that “an employee shall not use his public office for his own private gain, for the endorsement of any product, service or enterprise, or for the private gain of friends, relatives, or persons with whom the employee is affiliated in a nongovernmental capacity, including nonprofit organizations of which the employee is an officer or member, and persons with whom the employee has or seeks employment or business relations.”

Pompeo’s lawyer, Burck, was vehement in his defense. The draft version of the report, Burck states in an official response, “is, in short, a politicized document in the guise of an investigative one” that blows small tasks out of proportion.

The lawyer alleges that Pompeo’s engineering of the ouster of Linick, the State Department inspector general, was motivating the investigators. The investigators deny this and other allegations against them, noting that the probe began well before Linick was fired.

Burck noted that it was Susan Pompeo who often made the requests, not the secretary himself. “We had thought the time was long past that anyone would consider wives to be mere extensions of their husbands, but that antiquated and offensive view animates the entire draft report,” he wrote.

On at least 30 occasions, Mike or Susan Pompeo tasked State Department employees with “making restaurant reservations for personal lunches and dinners with Pompeo family members or friends,” the report states.

Employees told investigators that they viewed such tasks as involving department business because Diplomatic Security officials would have to do advance work to secure the locations. One staff member said he’d made similar reservations for other secretaries of State. The report suggests that the department clarify rules governing such requests.

One unusual case involved the Pompeos’ son, Nick. In September 2019, the Pompeos and then-Undersecretary of State for Management Brian Bulatao, a longtime friend of Mike Pompeo’s, were planning to attend a football game at the U.S. Military Academy at West Point. Bulatao and Mike Pompeo are West Point graduates. Nick Pompeo was to join them, but because he was not an official guest of the military academy, he was supposed to pay his own way.

Investigators say they found evidence that “Bulatao tried to obtain a price reduction” for Nick Pompeo, and that a hotel room booked for him used a “temporary duty rate reserved for federal employees on official business,” the report states, adding: “The Pompeos’ son was not a federal employee.”

The report did not delve into questions about the Madison Dinners, a set of gatherings the Pompeos held that drew allegations that the pair were trying to beef up their political Rolodexes under the guise of diplomatic work. A person familiar with the issue said investigators looked into the question of the Madison Dinners but determined that the couple had not violated rules that govern such matters.

The report also did not explore questions about the Pompeos’ obtaining housing in a military complex. It was not immediately clear if that issue is under investigation.

One case that the inspector general’s office found needed more clarity involved the Pompeos using State Department funds to buy gifts (such as gold nut bowls) for the hosts of dinners that appeared personal, and not related to diplomatic work. Investigators recommended that the department make an official determination on whether such gifts can be paid for using taxpayer dollars.

The Pompeos on at least three occasions asked that Diplomatic Security officials carry out some personal tasks for them, but for the most part, they did not turn to that group for such requests, investigators found.

In his interview, Pompeo repeatedly minimized the requests, according to the report, arguing that they were simply small tasks that did not require such intense scrutiny.

Because Mike Pompeo is no longer a federal employee, and his wife was not one, there’s little the State Department can do to penalize the couple for the alleged rule violations. One reason the report took so long to finish is that Mike Pompeo kept refusing to commit to an interview until finally agreeing to one in late December, less than a month before he left office.

However, the inspector general’s office recommended that various divisions at the State Department, such as the Office of the Legal Adviser, update or draft new guidance that establishes or further clarifies the appropriate use of department funds and staffers when it comes to personal tasks.

The State Department, now led by Secretary of State Antony Blinken, sent a brief response to the inspector general’s office in which it accepted those recommendations.

Asked for comment Friday, a State Department spokesperson said, “The department appreciates the work of the Office of Inspector General, and, as the report notes, concurs with all the recommendations and will proceed to implement them.”