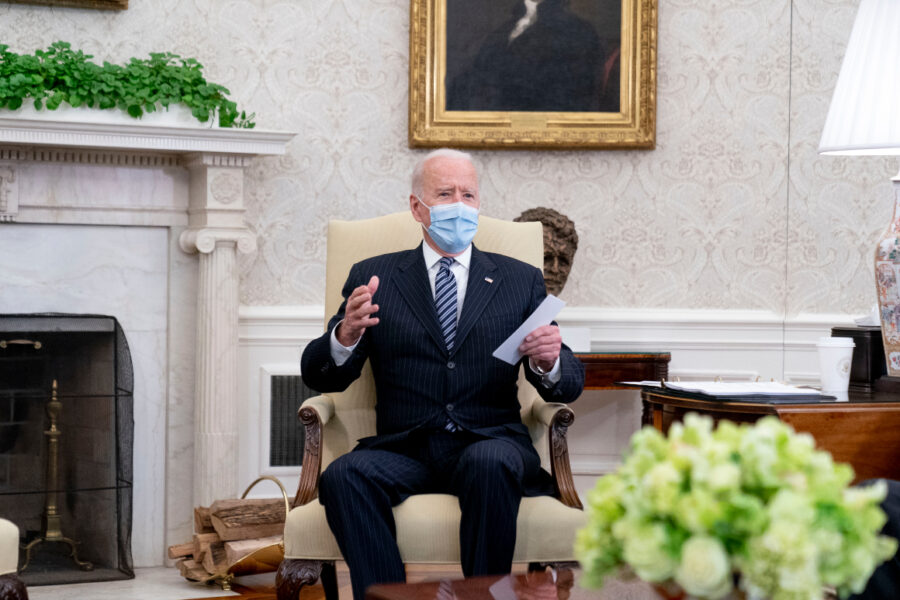 Joe Biden’s entreaties to Republicans on his infrastructure bill are picking up steam. But progressives are warning the president not to get too attached to his GOP friends.

“I personally don’t think the Republicans are serious about addressing the major crises facing this country. Maybe I’m wrong, but we’re certainly not going to wait for an indefinite period of time,” said Sen. Bernie Sanders (I-Vt.).

“We’re gonna move forward rapidly,” Sanders vowed. “They have something to say? Now is the time to say it.”

Liberals are wary that the GOP may be trying to prolong infrastructure talks for weeks or even months, potentially setting back Democrats’ ambitious agenda as Biden goes back and forth with the opposition party over how big to go and when. But several prominent progressives also want to keep giving Biden room to try with Republicans — up to a still-undetermined point.

At the moment, the two sides seem very far apart: Biden’s initial infrastructure spending pitch was more than $2 trillion, with a second part of the plan still in development. And several Democrats said Monday they seriously doubt that discussions with the GOP will produce anything at all.

Republicans have not indicated they would be willing to spend anything more than $800 billion — a paltry sum for Democrats — and even that might be a stretch. And while liberals in Congress aren’t yet asking Biden to ditch the talks altogether, they are clearly signaling that his patience, like theirs, should be finite.

Sen. Ed Markey (D-Mass.) said that he’s “afraid that, like waiting for Godot, the Republicans may never show up.”

Biden “should approach the negotiations with an open mind and an open heart. But he should not delay,” said Sen. Elizabeth Warren (D-Mass.). “It is the president’s responsibility to keep this process moving. We can’t end up months from now with no real progress and no real infrastructure bill.”

“He should be skeptical of Republicans, sure,” said Sen. Richard Blumenthal (D-Conn.). “Mitch McConnell has certainly given good reason for skepticism given his staunch resistance, even intransigence, to Biden proposals.”

At his latest bipartisan meeting on Monday afternoon, Biden told House and Senate attendees that he was ready to compromise, according to attendees. Rep. Carlos Gimenez (R-Fla.) said that Biden asked Republicans to stitch together an offer within a month.

That’s just the latest recent olive branch from the president to the GOP. Already his overtures to Republicans have eaten up more time than they did during debate over his $1.9 trillion coronavirus relief plan earlier this year. Democrats decided then to leave Republicans behind almost immediately after GOP negotiators put forward a bill less than one-third of what Biden is seeking. But there was also a more obvious deadline then as benefits ran out in March.

That recent memory means the current skepticism about honest deal-making cuts both ways. The GOP sees a president trying to reconcile his campaign persona as a bipartisan negotiator with his record of encouraging Democrats to pass their huge coronavirus bill along party lines.

“We have heard him sound sincere, right? And then, when it came down to it, if they had the votes, the Democrats did what they wanted to do,’” Gimenez said after meeting with Biden on Monday.

“And so the question,” the Florida Republican added, “is: ‘Well, do the Democrats have the votes they need?’”

At the moment, the answer appears to be no. Sen. Joe Manchin (D-W.Va.) wants to pursue a potential bipartisan deal and is not a fan of using the budget reconciliation process to avoid a GOP filibuster. Biden ally Sen. Chris Coons (D-Del.) has pitched a two-step approach to help clear that hurdle: an $800 billion physical infrastructure bill passed with GOP support, and a larger Democratic-only bill to chase it.

Even those in the Democratic caucus who think it would be easier to use their 50 Senate votes to muscle through another massive package without GOP votes acknowledge that they first need to get the blessing of Biden, Manchin and others.

“It’s the right thing to do to engage in good faith. But remember, [there’s a] pattern … that can’t be repeated of them just trying to stall and burn time,” Sen. Jeff Merkley (D-Ore.) said of Republicans. “I would support using reconciliation, but you’ve got to have 50 votes. And it’s not clear that’s a path available to us at this point.”

How to pay for infrastructure investment remains the biggest obstacle to a bipartisan deal. Senate Republicans have made it clear that they do not support Biden’s plan to increase the corporate tax rate and, led by Sen. Shelley Moore Capito (R-W.Va.), are working on their own counterproposal.

But any potential compromise with Republicans increases the risk of alienating needed progressive votes. Some liberal lawmakers have already criticized the Biden infrastructure plan for not going far enough. Sen. Bob Casey (D-Pa.) said he doesn’t have “have a lot of confidence” that Republicans and Biden can reach a deal capable of winning 60 votes in the Senate.

Sen. Brian Schatz (D-Hawaii) said that at some point Republicans will need to demonstrate that they have the 10 votes to overcome a potential filibuster.

“Then we have to see whether there’s any overlap and whether that proposal would cause us to lose some number of people on the left,” he said. “And that’s going to be the balancing act.”

It may be difficult for Democrats and Biden to perceive when to call it quits in their talks with Republicans. Speaker Nancy Pelosi has indicated she wants the House to move by July 4, an ambitious timeline even if Democrats are only negotiating among themselves.

Meeting that deadline will be even more difficult if Republicans are along for the ride too.

“At some point, if you just see that there’s no real effort to kind of bridge a reasonable bipartisan agreement, you’ve got to go. Because that’s what people are counting on,” said Senate Finance Chair Ron Wyden (D-Ore.). “You reach that point, when if you wait any longer, people get hurt.”

Melanie Zanona and Tanya Snyder contributed to this report.