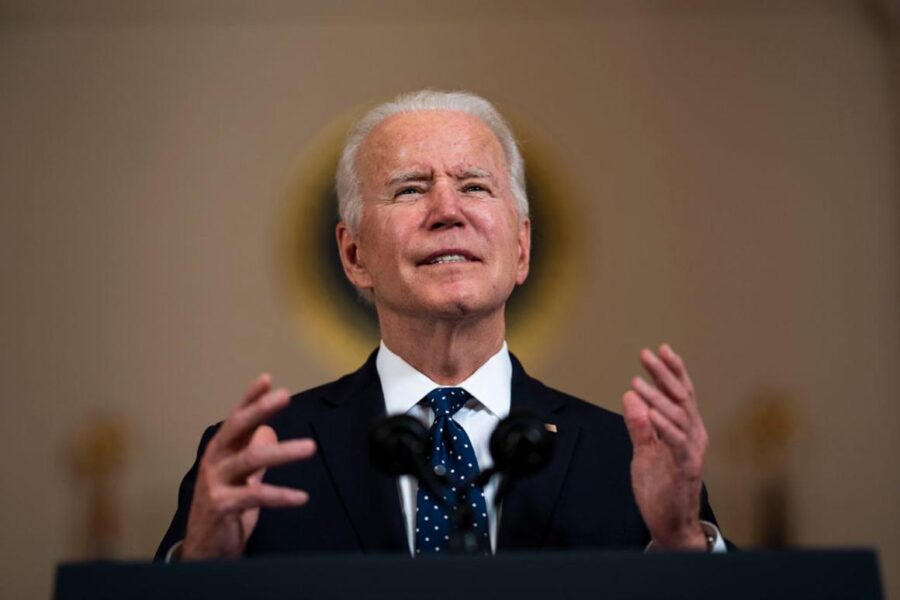 President Joe Biden pledged Thursday to slash U.S. emissions of greenhouse gases in at least half by 2030 — an ambitious target that will require retooling the world’s largest economy in an effort to put the U.S. at the forefront of the international campaign to slow climate change.

It’s a goal the White House insists the U.S. can meet even if Congress rejects Biden’s calls for trillions of dollars in green infrastructure spending.

The new target embodies one of Biden’s top policy priorities and represents a stark shift from the Trump administration, which had dismissed the threats posed by climate change and rejected the 2015 Paris Climate Agreement as a plot to hobble the U.S. economy. In contrast, Biden has made reducing carbon dioxide from fossil fuels a core part of his $2.2 trillion infrastructure plan and called for putting the U.S. on a path to eliminating net greenhouse gas pollution by mid-century.

Thursday’s announcement came ahead the White House’s two-day virtual climate summit with 40 world leaders. Biden’s target calls for cutting U.S. carbon dioxide output by 50 to 52 percent compared with 2005 levels — a far more aggressive goal than the one former President Barack Obama proposed half a decade ago.

In his opening remarks to the summit — which, like many pandemic-driven virtual events, were initially marred by technical difficulties with the livestream audio — Biden echoed his domestic arguments that fighting climate change would be an economic boon for the countries that embraced new technologies.

“Those that do take action and make bold investments in their people in a clean energy future will win the good jobs of tomorrow and make their economies more resilient and more competitive. So let’s run that race,” he said, adding later “this is a moral imperative, an economic imperative. A moment of peril but also a moment of extraordinary possibilities.”

Leaders of several nations welcomed the U.S. back into the global climate diplomacy realm in their remarks early Thursday, stressing the international collaboration was needed to address the global problem.

Chinese Premier Xi Jinping, who was the first leader to speak after Biden, used his address to defend Beijing’s record on climate change, even as the country that is the world’s largest greenhouse gas emitter comes under pressure to move faster to reach carbon neutrality than the 2060 target it has set.

“China has committed to move from carbon peak to carbon neutrality in a much shorter time span than what might take many developed countries, and that required extraordinarily hard efforts from China,” Xi told the summit.

And he pledged for the first time to begin reducing coal consumption by the middle of the decade in the country that is the world’s largest user of the planet-warming fuel. “We will strictly control coal-fired power generation projects. We will strictly limit the increase in coal consumption over the 14th Five-Year period and phase it down in the 15th Five-Year period,” he said, referring the next economic planning period that begins in 2026.

For the U.S., after more than two decades of policy reversals on climate change, the U.S. will face skepticism in convincing the world it can follow through on the goal, especially given the long odds Biden’s infrastructure and climate proposal — the American Jobs Plan — faces in passing the narrowly divided Congress. Administration officials contend that their 2030 target is achievable without enacting that plan through legislation.

Many experts doubt whether hitting the climate marks is feasible without enacting significant portions of that infrastructure and jobs plan.

“That is, I guess we could say, the $2 trillion question,” said Dan Lashof, director of think tank the World Resources Institute.

Administration officials told reporters in a Wednesday briefing that they saw multiple pathways to achieving the climate goal outside of the infrastructure package as currently crafted.

Ali Zaidi, the deputy White House national climate adviser, said at a separate Wednesday event that the plummeting costs of renewable energy that have helped reduce emissions — even under the coal-promoting Trump administration — as well as the climate efforts by cities, states and major companies, have shown steep reductions are possible.

“The trend towards the utilization of clean energy technology around the world is both steep and secular,” Zaidi said.

Environmental groups have produced reams of reports and analyses arguing that emissions cuts of 50 percent by 2030 are both necessary and achievable, but practically all of them call for congressional action to speed the adoption of clean energy. That could be in the form of legally mandated emissions targets, a clean energy standard that requires adoption of green energy, or direct spending to eliminate carbon pollution.

“I think it would be basically impossible to achieve the proposed [target] with executive authority alone, both in terms of investment and regulation,” said Alex Trembath, deputy director at the Breakthrough Institute, a progressive think tank focused on environment and humanitarian problems.

“I’m sure there are things the administration can do on the margins, but for the ambition they’re announcing, I can’t see it happening without legislation,” he added.

RMI, formerly the Rocky Mountain Institute, a clean energy think tank, worried that without federal mandates, the patchwork of state policies would not be adequate to make up for shortfalls in executive authority to slash emissions.

“The answer to the question of whether the White House can achieve such a goal alone is almost certainly no,” said Mark Dyson, a principal with the carbon-free electricity practice at RMI. “It is very unlikely that this goal could be achieved without new federal legislation. Currently, many of the key rules and regulations are done at the state level. While some states have aggressive policies, they are not uniform or aggressive enough to meet the [goal].”

But other progressives are more optimistic, including Christy Goldfuss, head of energy and environmental policy at the progressive Center for American Progress and a former Obama White House official.

It’s unclear whether the infrastructure plan could pass through an evenly split Senate — much less a key climate element of the plan: a clean electricity standard that would sharply ratchet down emissions.

High-ranking Biden officials have publicly championed the jobs and infrastructure package as essential for reshaping the power grid, transportation sector, buildings and industry in a climate-friendly fashion.

Because of that uncertainty around whether Biden’s new goals are feasible, many countries attending the two-day summit are taking a wait-and-see approach before increasing their own ambitions, although Canadian Prime Minister Justin Trudeau increased Canada’s target to a 40 to 45 percent reduction compared with 2005 levels by 2030.

And following recent pressure from the U.S., South Korean President Moon Jae-In promised that his nation would cease all public financing for overseas coal-fired power plants, eliminating one of the last major international sources of money for the fuel. Japan, however, which has also drawn U.S. pressure, did not announce such a measure.

The fact that any country was prepared to make new commitments so early in Biden’s term reflects the considerable energy that special climate envoy John Kerry devoted to the campaign in recent weeks. The summit also represents a shift in the balance of climate diplomacy, as shown by the United States’ ability to convene world leaders to discuss climate change outside the formal international process for addressing the issue, which will continue in November at a conference in Glasgow, Scotland.

“They clearly created a lot more momentum for [the Glasgow talks] than even I expected,” said Jake Schmidt, senior strategic director for international climate with the Natural Resources Defense Council.

The new U.S. climate change goal, known in the parlance of the Paris Climate Agreement as a “nationally determined commitment,” is the centerpiece for the event. Each nation under the agreement is required to issue an NDC, but there are no requirements on how stringent such pledges must be. The only mandate is that the plans aim to prevent rising global temperatures from crossing a tipping point of 2 degrees Celsius — and, ideally, 1.5 degrees Celsius — above pre-industrial levels.

Biden’s number nearly doubles the carbon-cutting goal President Obama set, which committed the U.S. to curbing greenhouse gases 26 to 28 percent below 2005 levels by 2025.

The U.S. is close to meeting Obama’s goal. But reaching the new target seems implausible without extra authority and spending from Congress, said Robbie Orvis, director of energy policy design with the think tank Energy Innovation.

“We have to push on the sectors where the technologies are readily available,” he said, adding that the clean electricity standard Biden has proposed is a “linchpin” to any credible plan to halve emissions in a decade. That idea envisions curbing power sector emissions 80 percent by 2035 and eliminating them entirely by 2050, and has earned the backing of the electric utility industry.

“Being able to say this isn’t just President Biden’s wish list — you have big U.S. businesses that are the core of U.S. manufacturing calling for similar targets — that can create momentum in Congress and for selling it abroad,” he said.

Nathan Hultman, who worked on the Obama climate pledge, said he saw multiple paths to reach the goal Biden set — even if the administration was forced to rely primarily on executive actions and measures like tax credits. The Obama goal, he noted, had underestimated how quickly clean technology costs would plummet, how cities, states and counties would act, and how the broad shift in public opinion would contribute to cutting emissions.

“Those are the things that I would say to other world leaders if they come back and say, ‘Well, why should we think that this time is different?’” said Hultman, who is now director of the Center for Global Sustainability at the University of Maryland. “The answer is, it is actually different.”

Michael Grunwald contributed to this report.