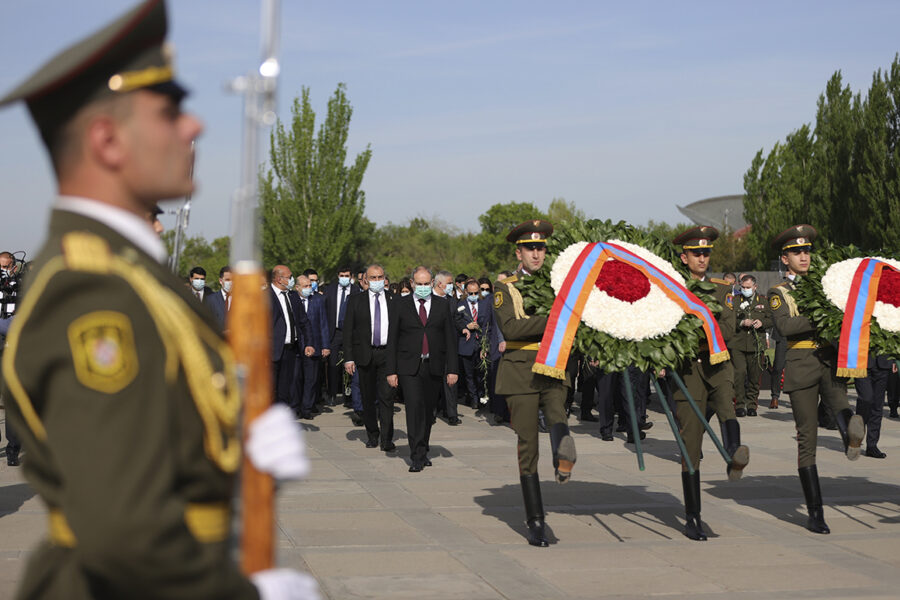 President Joe Biden on Saturday issued the document Armenian Americans have pursued for decades: a declaration that the Ottoman Empire’s slaughter of an estimated 1.5 million Armenian civilians was genocide.

It’s a deceptively simple action, carrying no force of law. Yet it’s a bold move for Biden, who has gone beyond what any American president has ever been willing to do. Until now, presidents have declined to formally apply the term “genocide” for fear of sparking a backlash from Turkey, which vigorously denies it. According to the Turkish account, World War I-era violence between Muslim Ottomans and Christian Armenians led to large casualties on both sides. According to most historians, however, the evidence is clear the Turks engaged in a years-long ethnic cleansing campaign that included forced death marches and mass starvation.

Biden’s declaration represents an important step toward fulfilling America’s commitment to human rights across the world. At home, it begins to close the open wound at the center of the Armenian American experience.

Every American of Armenian descent — indeed, every Armenian in the global diaspora — lives with the ghosts of the Armenian Genocide. We learn the harrowing family stories at an early age. We’re shown photographs that we can never forget. The soundtrack to our lives is Der Voghormia, the haunting liturgical hymn “Lord have mercy.”

What binds us together is a pride and joy in our ancient heritage, but also a sense of shared sadness over this brutal piece of unfinished historical business. Whether it’s the Armenian American communities of California or Boston or Chicago or Detroit or Philadelphia or anywhere else, we have been trapped in a mourning period with no end, a funeral cortege with no destination, so long as the truth of what happened in 1915 was denied and the searing experiences of loved ones went unrecognized.

America occupied an important and positive role in this epic tragedy. Its missionaries and diplomats were among those who courageously raised the alarms about the atrocities unfolding thousands of miles away to a little-known Christian people. It served as a refuge for countless genocide survivors.

Those who were lucky enough to make their way to America were grateful until their dying days. This country gave them so much — a chance to recover, to rebuild, to live without fear. It was their beacon in a murderous and impossibly cruel world, a place that gave them more opportunity and hope than they could have ever imagined just a few short years before.

My grandfather was one of those survivors. He arrived here a penniless, orphaned teenager from the other side of the world, the only one in his family to make it out alive. His love for America eventually burned so brightly that he proudly sent his two sons off to war for his adopted country.

Survivors like him were nearly always too traumatized to look backwards, for fear of what they might see. There was no time to focus on the past; they were too immersed in the immigrant struggle. They left that burden for the generations to come.

But an accounting of the genocide, a moral reckoning led by the United States, never arrived. Other nations — Germany, France, Russia among them — made clear the massacres were state-sponsored genocide. But not America.

In the U.S., efforts to secure that declaration were dismissed as the attempted settling of some ancient tribal feud, a dispute that America had no business being a part of. But it had every reason to exert its moral authority by characterizing Turkey’s actions against the Armenian people in clear and unambiguous terms. This was the first modern genocide, so devious and effective in its design that even Adolf Hitler spoke of it admiringly.

Almost every Armenian knows the line by heart.

“Who, after all, speaks today of the annihilation of the Armenians?” Hitler said in his infamous Obersalzberg speech in 1939, one week before the German invasion of Poland.

Failing to call genocide by its name enabled and encouraged the growth of a genocide denialist industrial complex, funded by Turkish interests. For decades, Armenian Americans — who number anywhere from 500,000 to 2 million, depending on the source — found themselves fighting against an offensive dictated by Ankara and launched from its K Street beachhead in Washington, D.C. Lobbyists and former members of Congress — some of whom once championed recognition of the Armenian Genocide as elected officials — worked tirelessly to prevent it from happening.

They were armed with an argument that proved persuasive enough to subordinate America’s founding principles. Genocide recognition, it was said, ran counter to our national security interests because Turkey, an important geostrategic ally, needed to be placated.

To the Turkish government, an affirmation of the genocide was a red line, a transgression that threatened to unravel the entire relationship. Even the determined efforts of heavyweight lawmakers like Sen. Robert Dole, an exalted figure among Armenian Americans for his years-long commitment to their cause, weren’t enough to overcome the fear of alienating such an important ally.

In the end, Turkey undermined its own most powerful argument. It proved its unreliability as an ally under Turkish President Recep Tayyip Erdoğan, altering the political calculus that prevented even American presidents who wanted to affirm that that the killings amounted to genocide from directly saying so.

That left Biden with an opening to fulfill his campaign promise to officially recognize the Armenian Genocide. At the time, his vow wasn’t taken at face value — Barack Obama had said exactly the same on the trail, only to shy away at the annual April 24 moment of truth, the date recognized as Armenian Genocide Remembrance Day around the world.

Now, Biden has put the United States on record as the latest nation to formally recognize and condemn the Armenian Genocide.

There will be blowback from the Turkish government. The relationship will likely further deteriorate.

But Biden has placed the United States on the right side of history and allowed the sons, daughters, grandchildren and great-grandchildren of Armenian Genocide survivors to honor their legacy. Equally important, he has permanently foreclosed the option of any future president to call the horrific violence of 1915 anything other than its true name.