Republican Rep. Alex Mooney says he is definitely running for reelection. But his next race will have little in common with his last one: Suddenly, his own GOP colleagues from West Virginia have become his biggest political threats.

The Census Bureau made it official on Monday, when it announced how the 435 seats in the House of Representatives will be split between the states for the next 10 years. Seven states are losing seats next year due to stagnant population growth, including West Virginia, which is going from three districts down to two. The squeeze marks the start of the most politically uncomfortable and unpredictable year Congress must face each decade, when new maps drawn in redistricting force veteran incumbents into retirement, turn former friends into fierce rivals and pitch safe-seat House members into hotly contested elections.

The pressure is particularly strong in small states that lose seats, like West Virginia, where a redraw will slice the state in half. Mooney’s current district is sandwiched by GOP Reps. David McKinley on one side and Carol Miller on the other, but the new map will group two of them together — most likely Mooney and McKinley. They will have to come to terms with bleak, zero-sum options: One of them ends their political career early, or they battle against each other.

And so far, neither wants to say much about it.

“We’ll take a look at the numbers, see what they look like,” McKinley said as he hurried onto the House floor earlier this month, ignoring a question about whether he might retire.

In a similarly brusque interview outside the House chamber, Mooney said he would be running again.

“Yeah, that much I can tell you,” Mooney said. 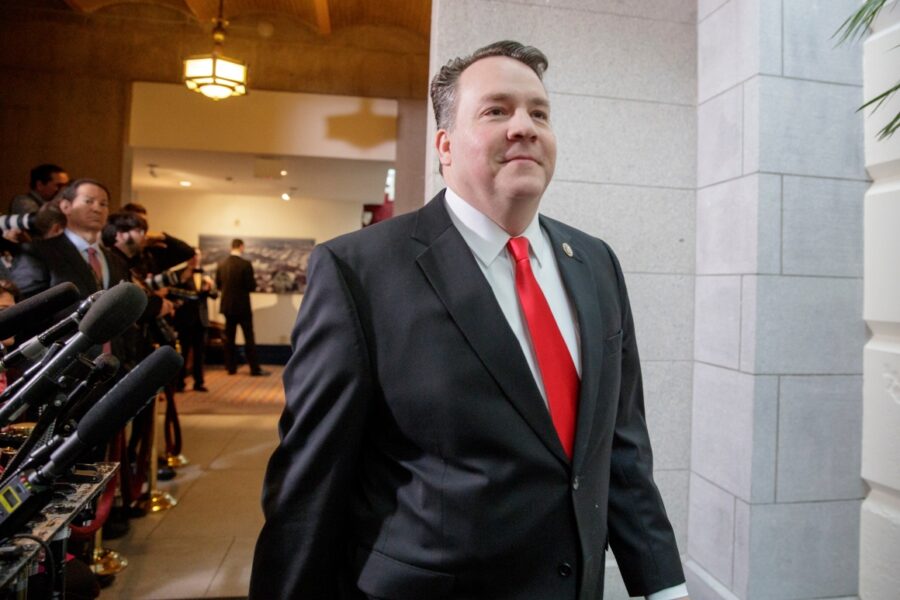 When pressed if he would still run if it meant challenging a colleague, Mooney responded in the clipped tones of a congressman who would rather be talking about anything else: “Said ‘definitely.’ So ‘definitely’ is definitely.”

Tense conversations will be unavoidable, especially within small House delegations that are getting even smaller. Rhode Island managed to avoid dropping down to one at-large district, leaving West Virginia as the only state guaranteed to feel the squeeze right away.

But more redistricting ramifications are coming fast. A half-dozen other states are losing congressional seats, and other member-versus-member races are on the horizon — especially in states where the maps are drawn the opposite party, such as Republicans in Illinois and Democrats in Ohio or in states with independent redistricting commissions that don’t take incumbency into account.

“There’s always someone that gets squeezed out because of how the districts get done,” said Rep. Darrell Issa, a California Republican first elected in 2000.

West Virginia could be a particularly sticky redistricting. McKinley has posted lackluster fundraising — while Mooney has banked well over $2 million and tends to garner more conservative vote ratings. But anyone challenging Mooney could revive old carpetbagging claims: He is a former chairman of the Maryland GOP.

Besides West Virginia, New York, Illinois, Michigan, Ohio, Pennsylvania and California are all shaving off a district. California is approaching its second redistricting cycle with a commission tackling the lines. And it’s losing a district for the first time in state history.

“Running against a fellow colleague who’s in your own party is the worst experience — except in California, you have to do it twice. June and November,” said Rep. Brad Sherman (D-Calif.), who ousted a fellow Democratic incumbent, Howard Berman, in a brutal 2012 race.

Delays in the Census data have left most members in the dark. In a typical redistricting cycle, the states would have gotten their topline reapportionment data late last year and would be preparing to receive the detailed block-level numbers that allow them to craft the individual districts.

That data now isn’t coming until late summer at the earliest. In Ohio and Pennsylvania — two states with GOP-controlled legislatures — endangered Democratic incumbents are openly eyeing statewide campaigns rather than waiting around to see the new districts.

Rep. Tim Ryan (D-Ohio) — whose Youngtown-based district has trended red over the last four years and who has long considered statewide campaigns without ever following through — formally announced a Senate run on Monday, hours before the reapportionment announcement.

Even without the available data, both parties are quietly anxious about the fate of some members in the yet-to-be-drawn new maps.

In Georgia, Democrats are already bracing for the prospect that they will be left with only one winnable seat in the suburbs north of Atlanta, where Reps. Lucy McBath (D-Ga.) and Carolyn Bourdeaux (D-Ga.) live. Republicans have trifecta control in Georgia and could create a deep blue seat based in Gwinnett County, leaving the other seat skewed heavily Republican.

In Illinois, GOP Rep. Rodney Davis could be left without a friendly district if Democrats unite Springfield with the bluer parts of Republican Rep. Mike Bost’s district to the South. Meanwhile, Bost could be jostling with freshman Republican Rep. Mary Miller for congressional survival.

Still, the intra-congressional fighting for seats might not be as bad as many expected.

Alabama Republicans and the entire Minnesota delegation got a break when their states held steady at seven and eight seats, respectively. Some of Minnesota’s eight incumbents were already preparing for member-versus-member fights. Instead, Democratic Reps. Dean Phillips and Angie Craig can now each have a seat in the Twin Cities suburbs, and Republican Reps. Michelle Fischbach, Tom Emmer and Pete Stauber won’t have to play musical chairs to the north, west and south.

The Democratic and Republican congressional campaign arms typically each appoint a designated redistricting chairman, who has the unenviable job of making sure delegations keep open lines of conversation among themselves as maps are drawn.

The redistricting process will be foreign to most of the current Congress. Of the 435 members, roughly 160 were in the House ten years ago. But as political survival instincts kick in, they’ll learn how quickly old friendships sour.

If 2011 is any indication, Congress is about to turn into a soap opera.

It was spring of that year when former Democratic Rep. Russ Carnahan lashed out at fellow Missouri Democratic Reps. Lacy Clay and Emmanuel Cleaver, who declined to oppose a GOP-led redistricting plan that placed Carnahan in the same district as Clay. “F— you. Thanks for your help,” he reportedly told Cleaver on the House floor.

In Pennsylvania, former Democratic Rep. Jason Altmire recalled taking then-candidate Mark Critz around his hometown and holding D.C. fundraisers for him when Critz ran in a 2010 special election. Two years later, they were running against each other and Critz tried to get Altmire booted off the ballot.

“You see each other in the hall in the Capitol, and you’re sitting there on the floor and different conversations get overheard,” Altmire said. “And just it’s a very difficult work environment to be able to keep those friendships.”

Perhaps the most notable redistricting spat came in the Los Angeles area between Sherman and Berman, two veteran Democrats. Sherman, who trounced Berman by 20 points, said they both tried to convince the other to run in a brand-new seat with no incumbent in Ventura County — but neither had deep roots there.

In the heat of the campaign, a uniformed security guard stepped between them at a debate after Berman suggested Sherman was “delusional.”

“We’re both very, very polite people, with the possible exception of one minute,” Sherman recollected.