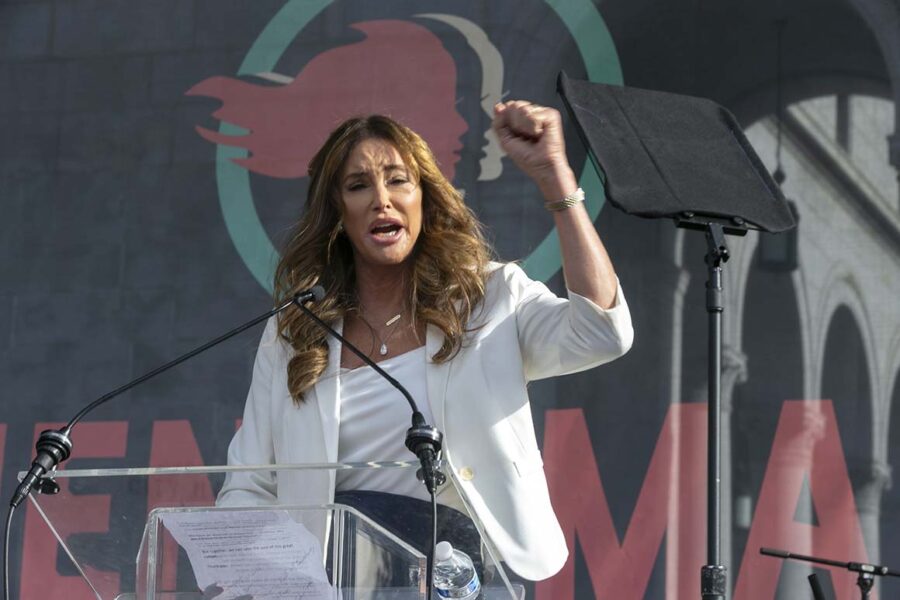 OAKLAND — Running in the California recall may be the best bargain on the planet for fame and fortune seekers.

For just $4,000, any registered voter can grab an instant platform in what’s sure to become the nation’s most watched election this year — and leverage that position on social media and airwaves with some of the most attention-getting stunts possible.

State officials announced Monday that the recall has enough signatures to qualify for the ballot, three days after reality TV star and transgender activist Caitlyn Jenner launched her campaign to challenge Gov. Gavin Newsom. California is already bracing for the media frenzy that occurred 18 years ago when B-list actors and ax-to-grind residents jumped into the state’s only other gubernatorial recall.

“If you want to be famous for being famous, there’s no better way to do it than to run for governor of California — even if you have no chance of winning,” said veteran California PR guru Larry Kamer. “It’s kind of the political equivalent of running naked down the street.”

The final field of candidates could look like a “clown car” of wannabes and political thrill seekers, Kamer suggested, and many believe the candidate field will easily top the 135 entrants in the 2003 race. The current social-media culture gives enterprising Californians an easy way to amplify their voice and build a following should they join the fray.

The 2003 contest included Hustler magazine publisher Larry Flynt, actor Gary Coleman and former Major League Baseball Commissioner Peter Ueberroth. Arianna Huffington joined the fray before she launched The Huffington Post. None of them came close to topping A-list movie star Arnold Schwarzenegger, who established himself early as the front-runner — but all gained coverage and notoriety as they ran for California’s top job.

Carey said in a Tuesday interview that she doesn’t actually support the recall of Newsom and believes the process is disruptive and expensive for voters. But since it’s happening, she wants to use the opportunity to “hear from the people” and use the platform to talk about real issues “like homelessness,” women’s health and small businesses. She said she has an unnamed Sacramento political adviser this time around — whom she dubbed “Deep Throat.”

Los Angeles billboard star Angelyne won’t be outdone. The 29th place finisher in 2003 has fired up her comeback campaign and is reprising her slogan, “We’ve had Gray, we’ve had Brown, now it’s time for some blond and pink,” a reference to her trademark hair and accessory colors.

Former San Francisco Mayor Willie Brown, who’s been a fixture in six decades of state politics, said California’s current recall system leaves the door open for a circus. Even he joked that he might run for governor, if only to sell some pricey “Willie Brown for Governor” hats and ties — “made by Brioni,” he boasts — to the hungry masses.

Before Monday’s announcement that the gubernatorial recall had enough valid signatures, more than 40 Californians declared their intention to run in the state of nearly 40 million people that’s home to some of the nation’s largest media markets.

The 2003 recall involved “a veritable who’s who of has-beens,” said David McCuan, professor of politics at Sonoma State University. But that parade will be far surpassed by the 2021 version, he predicted.

“Because of social media, the politics of Trump and kind of the anti-establishment, anti-everything moment that we are in,” he said, “the potential to have five or six times that number right is huge.”

This year, declared candidates include a growing crowd of Republicans, some with serious qualifications and political experience, like former San Diego Mayor Kevin Faulconer. He insisted that voters backed the recall because of “real frustration” with the state’s management under Newsom and legislative Democrats — and argues his mayoral experience provides a distinguishing message and platform in what may be an otherwise chaotic race.

“I actually got results in the only big city in California where we reduced homelessness by double digits,” Faulconer said, referring to a point-in-time count before the pandemic struck. “I did not defund the police; I increased the budget because public safety and safe neighborhoods are incredibly important. I’m somebody who made housing reforms to make San Diego more affordable.”

He’ll vie for voter attention with businessman John Cox — who was crushed in the 2018 general election by Newsom — and who has already taken to attacking Faulconer in mailers as a RINO (“Republican in name only”).

GOP former Rep. Doug Ose, a multimillionaire from Sacramento who made a fortune in real estate, has also declared he’s in. So has Republican Sam Gallucci, currently a senior pastor at the Embrace! Church in Oxnard, but formerly a top executive with PeopleSoft before the tech firm was sold to Oracle for upwards of $10 billion.

And at least one other major Republican — Ric Grenell, the former acting director of national intelligence in the Trump administration — has suggested he is strongly mulling the idea.

There’s also likely to be a dizzying array of issue diversity among other candidates, who will use the race as a megaphone to drive their single-issue messages. In 2021, that could span the political spectrum from anti-vaxxers and QAnon backers, from religious zealots to Communist Party activists.

Tech professional and pastor Tim Herode says that if elected, he would no longer accept excuses like climate change for California’s rampant wildfire season. “If that’s the case, then why doesn’t the desert sand catch fire?” he argues on his campaign website.

And small business owner Dakota K. Vaughn vows to dump “useless and unnecessary” laws, saying that if he’s governor, “dog neutering and registering will no longer be a requirement.”

Despite the entertainment value a free-for-all campaign may bring, critics say there are serious concerns about an election that will cost taxpayers perhaps hundreds of millions of dollars to run — a price tag that hasn’t yet been estimated by the California Department of Finance.

And Kamer warns that while the recall may create a flood of such political neophytes hoping to grab the brass ring, the vast majority will find the path intense — and the fame fleeting.

“People might know your name,” he predicts, “but they’re not going to know you for anything — other than a stunt.”