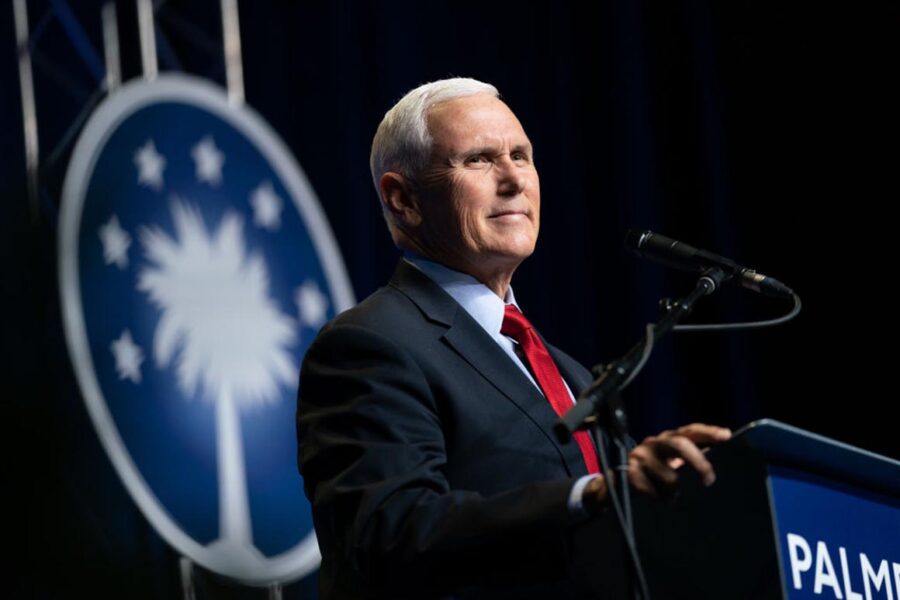 In his first public speech since leaving office, former Vice President Mike Pence on Thursday closely aligned himself with his old boss, touting the Trump administration’s accomplishments while urging conservatives to reject what he called the Biden administration’s “far-left agenda.”

“But how times have changed,” Pence said. “In just 100 days, the Biden-Harris administration has launched an avalanche of liberal policies that threaten to derail all the progress that we made.”

On Thursday evening, Pence headlined a dinner hosted by the Palmetto Family Council, a South Carolina social conservative Christian group. His remarks, delivered at a convention center in Columbia, S.C., largely focused on what he said he and former President Donald Trump were able to accomplish during their four years in office.

Pence touted a variety of their administration’s accomplishments, from conservative judicial appointments and the Operation Warp Speed vaccine program, to foreign policy achievements like the Abraham Accords.

Pence called serving alongside Trump “the greatest honor of my life.” He made a passing reference to the events on Jan. 6, calling it a “tragedy at our nation’s Capitol,” but didn’t address the violence that occurred.

During his speech, which coincided with President Joe Biden’s 100th day in office, Pence labeled Biden’s agenda “an explosion of runaway spending” and decried Democrats for what he viewed as launching a war against “American traditional values.” He said Republicans had the winning agenda, focusing on key issues such as national defense, a secure border and conservative judges.

Pence did not say whether he would run for president in 2024, but the location of the night’s event was notable. South Carolina hosts the first presidential primary in the South, and a win in that state resuscitated Biden’s flagging campaign to be the Democratic nominee last year.

His remarks revealed that he was willing to squarely align himself with the former president, even in the face of reports that their relationship had deteriorated in the aftermath of the Capitol insurrection, where rioters were recorded yelling, “Hang Mike Pence!”

However, earlier Thursday, Trump told Fox Business that he would certainly consider Gov. Ron DeSantis of Florida as a running mate if he were to run again — the latest sign of a fracture between Trump and Pence.

Last month, a poll of Republican voters found that DeSantis and Pence were tied for the 2024 GOP nomination if Trump decided to opt out.

This month, publisher Simon & Schuster announced a two-book deal with Pence — a common tactic for those prepping a presidential run. The first book, an autobiography focusing on the former vice president’s faith and public service, is expected to land in 2023.