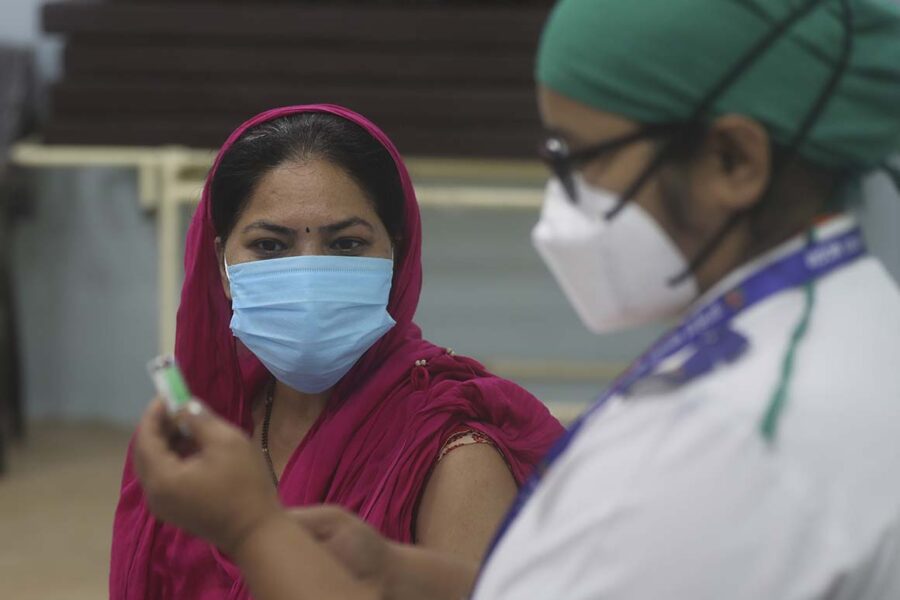 Shekar Narasimhan started calling and emailing the White House on a Wednesday—the same day India’s Covid-19 death toll reached a record 2,000 people in a single day. News of oxygen shortages, overrun hospitals and depleting vaccine supplies had been trickling in from India all week, and Narasimhan, a longtime Democratic fundraiser who chairs a super PAC focused on mobilizing Asian Americans and Pacific Islanders, was among the rising chorus of Indian American voices calling for the U.S. to do more.

Within 24 hours, he had heard back from a White House official, who told him that a team had been assembled to consider the situation. Two days after that, Secretary of State Antony Blinken tweeted that the U.S. would “rapidly deploy additional support to the people of India.” The following day, national security adviser Jake Sullivan spoke on the phone with his Indian counterpart, Ajit Doval, and the administration announced it would make select raw materials needed for vaccine production “immediately available” to India, along with supplies of therapeutics, rapid diagnostic tests, ventilators and personal protective equipment. And on Monday, the White House said it was releasing 60 million doses of the AstraZeneca vaccine to India and the rest of the world. A little over a week after Narasimhan and other activists first began contacting the White House, planes loaded with medical supplies were en route to New Delhi.

Narasimhan says that in decades working as an advocate on behalf of the Indian American community, nothing like this had ever happened before. As a reporter, I’ve been covering the political influence of the country’s more than 4 million Indian Americans for years, and that rings true: Up until now, pronouncements of growing clout have largely relied on statistics—things like increasing voter turnout, political donations and the growing number of Indian Americans entering electoral politics—rather than a record of actual policy wins.

“I cannot think of a single example where we have had this kind of access” before, Narasimhan said. A few moments earlier, he had to halt our interview to take a call from the White House.

After years of trying to build its influence—raising money, supporting candidates, building a ground game—the Indian American political world is starting to feel a sense of actual power and clout in the Biden-Harris administration—one that, it hopes, marks a new era for U.S. politics.

“Now we are at a point where we know that when Indian Americans call, the highest levels of the administration listen,” said Sanjeev Joshipura, executive director of Indiaspora, a nonpartisan network of Indian American leaders.

The Indian American population has been growing steadily over the past few decades—it’s among the fastest-growing and most prosperous minority groups in the country, a trend that has also served to elevate its political influence. It notched a symbolic win when Kamala Harris, whose late mother was from India, took the oath of office as vice president; Joshipura estimates that members of the Indian American community raised $20 million to $30 million for political candidates across both parties in the 2020 presidential election alone—a record.

Over the past several weeks, the administration heard mounting anger and desperation from those voters. After taking office, President Joe Biden left in place a Trump-era ban on exports of raw materials needed to produce Covid-19 vaccines, a measure the administration felt was necessary to ensure enough vaccinations for Americans. But pressure to change course started building as the gravity of the crisis in India began to crystallize. (A U.S. ambassador to India has yet to be nominated; the portfolio is currently being run by a chargé d’affaires, a lower diplomatic rank).

“I don’t think they understood the widespread panic,” said Milan Vaishnav, a senior fellow and director of the South Asia Program at the Carnegie Endowment for International Peace. “Things were spinning out of control.”

On April 16, Adar Poonawalla, CEO of the Serum Institute of India, the world’s largest vaccine manufacturer, made a direct appeal to the president on Twitter: “Respected @POTUS, if we are to truly unite in beating this virus, on behalf of the vaccine industry outside the U.S., I humbly request you to lift the embargo of raw material exports out of the U.S. so that vaccine production can ramp up. Your administration has the details.”

Although it’s unclear how big a role America’s export ban played in India’s vaccine woes—domestic factors, including a fire at the Serum Institute and India’s own export of more than 60 million vaccine doses as part of a global charm offensive, also played a part—the plea set Indian American Twitter alight. In the weeks that followed, prominent members of the community, many of them on the receiving end of a steady stream of anguished messages from friends and family in India, began demanding that Biden do more to help India manage the crisis.

Ashish Jha, dean of the school of public health at Brown University tweeted that the U.S. is “sitting on 35-40 million doses of Astra Zeneca vaccine Americans will never use. Can we please give or lend them to India? Like may be now? It’ll help. A lot.”

Neal Katyal, a lawyer and former U.S. Acting Solicitor General, tweeted: “We just created oxygen on mars. Methinks there must be a way for America to get more O2 to India.” Salman Rushdie urged Biden to overturn the export ban, too.

Behind the scenes, Joshipura said Indiaspora members were in close contact with administration officials. “We were very active at the very, very highest levels of the administration, starting with the president on downwards,” he said.

That back-channel offensive targeted the entire senior ranks of the administration, said Narasimhan. “There isn’t a single senior person in the White House who didn’t hear from somebody who said, ‘Hey, we’ve got a problem.’”

On Friday, April 23, the U.S. Chamber of Commerce—whose members, many of them with operations in India, had been sounding the alarm—issued a statement calling on the White House to “to release the millions of AstraZeneca vaccine doses in storage.”

“We were on the phone constantly with the administration saying, ‘Guys, this is bad,’” said Nisha Biswal, senior vice president for South Asia at the Chamber and head of the U.S.-India Business Council. “Within 48 hours, the administration started to take action. “Once we did mobilize, they did move on a dime.”

While it’s possible Biden would have taken the steps he did even without the chorus of Indian American voices demanding action—India is widely viewed as an important strategic partner in Asia—the groundswell no doubt accelerated the pace of the administration’s response. “I’m not saying we necessarily changed their decision,” Joshipura said. “But we definitely played a role in expediting it. And the commitment of the highest levels of the administration to the decision was definitely influenced by what we did.”

What he and other Indian American civil society groups did was build a bona fide political juggernaut. Voter turnout among Indian Americans has skyrocketed in recent years. New polling from Narasimhan’s AAPI Victory Fund found that, across 48 states with vote history, the number of votes cast by Asian Americans, including Indian Americans, increased by a staggering 46 percent in 2020, compared with just 12 percent among all other voters—a trend that primarily benefited Democrats. Sixty-five to 70 percent of Indian Americans voted for Biden in 2020, roughly similar to the percentage that voted for Hillary Clinton in 2016. In Georgia, a state that voted blue in 2020 for the first time in nearly 30 years, the surge in Asian American turnout far exceeded the margin of victory. And of the record amounts of cash that Indian American voters poured into the last election cycle, most went to Democrats.

That helps explain the swiftness of the administration’s response. “In a 48-hour period you saw the U.S government go from 0 to 60,” Vaishnav said, recalling the days just prior to the administration’s announcement that it would send raw materials and other aid to India. “That’s because Indian Americans mobilized. They went on social media, they called everyone they knew in government, they called everyone they contributed money to.”

It’s also not just Indian Americans’ firepower as voters and donors that may have nudged the Biden administration into action. There are now enough Indian Americans serving in Congress—Ami Bera, Raja Krishnamoorthi, Ro Khanna, Pramila Jayapal and, before she was tapped as vice president, Kamala Harris—to warrant a name: the “samosa” caucus, whose members all publicly advocated for action to assist India.

Several of them want the president to go even further and require U.S. vaccine-makers to license production know-how to drugmakers in India and elsewhere. “They’re not allowing manufacturers to use the vaccine, even manufacturers willing to pay for it,” said Khanna, vice chair of the House Caucus on India and Indian Americans, in an interview with the progressive news organization Truthout. “And what we’re saying is, “No, they need to be required to license it.”

One hundred ten members of Congress have signed a letter to the president asking him to support a proposal by India and South Africa to temporarily waive some patent provisions under the Trade-Related Aspects of Intellectual Property Rights framework, a position the administration has so far refused to take and that pharmaceutical industry groups and some legislators oppose.

There are some who say the Indian American community needs to use its newfound power to go beyond humanitarian measures and pressure the U.S. into a harder political line against Indian Prime Minister Narendra Modi. “This is a man-made crisis,” said Prerna Singh, an associate professor of political science and international Studies at Brown University. “And that man is Modi.”

Modi’s missteps during the pandemic have been widely criticized, but he remains hugely popular among Indian Americans, irrespective of their political affiliation. Modi, who was famously friendly with former President Donald Trump, has used increasingly authoritarian tactics to stifle dissent, such as ordering social media companies to remove posts critical of the government’s pandemic response. “What Modi is doing is anti-democratic,” said Singh, who wants the diaspora and the Biden administration to speak out against what she believes is Modi’s culpability in the disaster unfolding in India. Narasimhan, on the other hand, said this would “politicize a humanitarian crisis when people are dying” and that “it’s not our place to decide who is at fault, but to do what we can to help.”

Though the crisis in India is far from over and efforts by Indian Americans to assist the country are ongoing, the administration’s actions to date represent perhaps the most momentous political win for the community in recent memory. But it isn’t their first.

In the early 2000s, Indian Americans mobilized to push the government to lift economic and military sanctions that had been imposed on India after it tested a nuclear weapon in 1998. President George W. Bush obliged, pushing the U.S. into a closer relationship with India that persists today.

One senior senator back then was particularly receptive to the move, writing in a letter to Bush that “the economic sanctions against India serve to stigmatize rather than stabilize” and that if the sanctions are removed, “India will respond with reciprocal acts of goodwill in nonproliferation and other arenas.”

That senator’s name was Joe Biden.