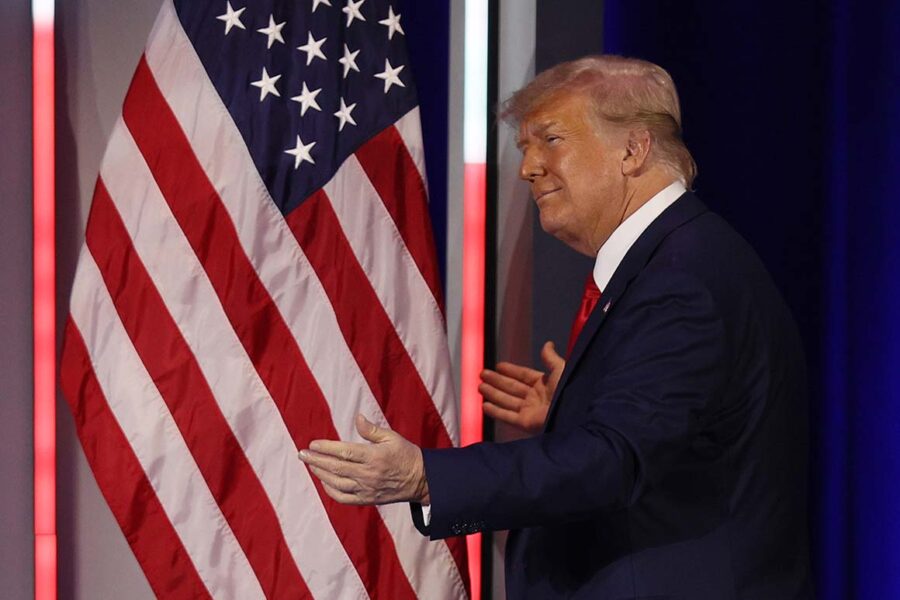 Former President Donald Trump’s potential reemergence on Facebook this week could dramatically upend politics. But it’s not the megaphone the platform offers him — it’s the money.

Trump has not been on Facebook since it booted him in the wake of his encouragement of the January 6 riots at the Capitol. But an independent oversight body tied to the company is expected to announce on Wednesday whether that suspension will be upheld.

Should the suspension be dropped, Trump and his campaign committee could begin posting again to more than 32 million followers. He can also begin running ads. And while GOP operatives are gaming out just what it would mean to give back the former president a powerful media bullhorn, the real impact, they say, will be seen in dollar signs. A return to Facebook would open major fundraising spigots that further cement Trump’s hold on the Republican Party, protecting his massive grassroots donor network from potential rivals.

“It really fucks the other ‘24 wannabes,” said one top GOP strategist, who predicted that all but a few top Republicans with established Facebook presences and fundraising networks would find it harder to raise cash online if Trump was once again tapping into that stream.

Not everyone in GOP circles was willing to concede that a Facebook-liberated Trump would suck up most of the conservative grassroots donor money. Others argued that Trump coming back on the platform would compel donors to give money not just to Trump but to multiple different political groups with which he was aligned or affiliated. That could include official Republican entities.

But there was widespread agreement that Trump being able to advertise again on the platform would further empower him specifically on the increasingly important turf of online campaigning. “A massive, massive deal,” is how one top Democratic digital operative put it. “Extraordinary.”

Online fundraising has become an increasingly bigger component of politics in recent cycles. And few politicians have taken more advantage of it than Trump, who raised more than $378 million in small dollar donations during the 2020 cycle. The 45th president has relied heavily on small dollar donors to propel his campaigns, even as he’s touted his ability to self-finance. He’s fostered that community predominantly through Facebook. During the 2020 campaign cycle, both Trump for President and Make America Great Again Committee jointly spent about $140 million on Facebook advertisements, according to figures compiled by Facebook. Some of that was for purposes of voter persuasion. But aides and digital campaign experts say the main purpose was to cultivate grassroots donor networks.

“He has the best fundraising list in the Republican Party but there’s a half life to that — people change emails, they change text messaging, whatever so you need to have access to voters via Facebook ads to keep reaching them and activating them to sign petitions and stay on your list,” said Eric Wilson, a Republican digital strategist who runs Startup Caucus, an incubator for campaign technology. “It’s important for them to sustain that.”

With Trump having been off the platform for four months, neither he nor any affiliated entities has been using Facebook to raise cash or — more importantly — to ensure that he is growing or has up-to-date information on his small dollar donor network. Trump’s Save America PAC, the entity that he launched after the election, had more than $85 million cash on hand at the beginning of April, according to reports. Those funds were mostly pulled in from direct email and grassroots fundraising appeals outside of Facebook or DonaldTrump.com.

The beginning of a new administration has proven to be a gold rush for politicians of the opposite party in the past. During the first three months of 2017, then Sen. Kamala Harris (D-Cali.) spent nearly $300,000 on Facebook ads even though she’d just won office. The rate of return was just too good to pass up — from her investment she brought in $738,459 from donors giving less than $200.

“It definitely will help [Trump with] fundraising,” said David Kochel, a longtime Republican operative in Iowa who ran Jeb Bush’s 2016 campaign and has been a Trump critic. “Obviously they have a long track record of engagement. I think it will also be one of those things that for the media — every Tweet was catnip — the engagement numbers on Facebook will be insane, so it will be hard to look away for Trump-obsessed media.”

Facebook is also a key organizing ground for Republicans in particular. Although conservatives have declared war on “Big Tech,” including Facebook, the social media platform remains the most influential site for the right. Kevin Roose, a New York Times tech columnist, compiles a daily list of the 10 top-performing Facebook posts. Links shared by conservative commentators like Dan Bongino and Ben Shapiro or Fox News are consistently top performers on the site.

“On Facebook, on any given day, the right has anywhere from two to three times the engagement and reach of the left or news,” said Angelo Carusone, the president of Media Matters, a liberal group that monitors and studies conservative media. According to a study conducted by the organization, right leaning pages accounted for 45 percent of total interactions from political pages, compared to left leaning pages with 25 percent of total interactions.

Facebook played an outsized role in the rise of Trump as a candidate — from targeted spending by the campaign to the spread of ads by Russian troll farms boosting Trump. During the 2016 campaign, almost half of the Trump campaign’s nearly $200 million advertising budget was spent on Facebook. And the platform served as a conductor for donations throughout Trump’s presidency.

But while the site has boosted Trump’s fundraising efforts, it has not been the primary focus for Trump’s own outreach to supporters. One rarely gets the sense, for instance, that Trump himself is tapping out Facebook posts or dictating them to aides, whereas he’s dubbed himself the “Hemingway” of Twitter and boasted how individual tweets have driven entire news cycles. As a result, posts on Trump’s Facebook page feel less immediate and authentic — they tended to be primarily his own tweets, or live videos of political rallies or White House events.

Since his expulsion from Facebook and Twitter, Trump has continued to get his message out either through interviews with friendly outlets like Fox News or statements he dictates to aides and is shared through Save America PAC or presidential office press releases. Multiple advisers, and Trump himself, have said it is still an effective way for reaching supporters although it does not have the same reach.

“Every time I do a release, it’s all over the place. It’s better than Twitter, much more elegant than Twitter. And Twitter now is very boring. A lot of people are leaving Twitter. Twitter is becoming very, very boring,” Trump told Fox News’ Sean Hannity.

Trump, on Tuesday, launched a new website that closely resembled an old-school blog where he can post his thoughts in reverse chronological order without users having the ability to comment on them. It was quickly critiqued for lacking the type of engagement features that define social media platforms. And even before it was debuted, Wilson said, a re-institution to Facebook would prove extremely helpful for the former president regardless of whatever venture he launched.

“It’s important for his political future, whether that’s supporting candidates or running himself that he get access to Facebook,” said Wilson. About 60 percent of voters use Facebook on a daily basis — that’s more than watch local TV news.”

(Disclosure: The wife of a reporter for this piece, Sam Stein, is an employee at Facebook)