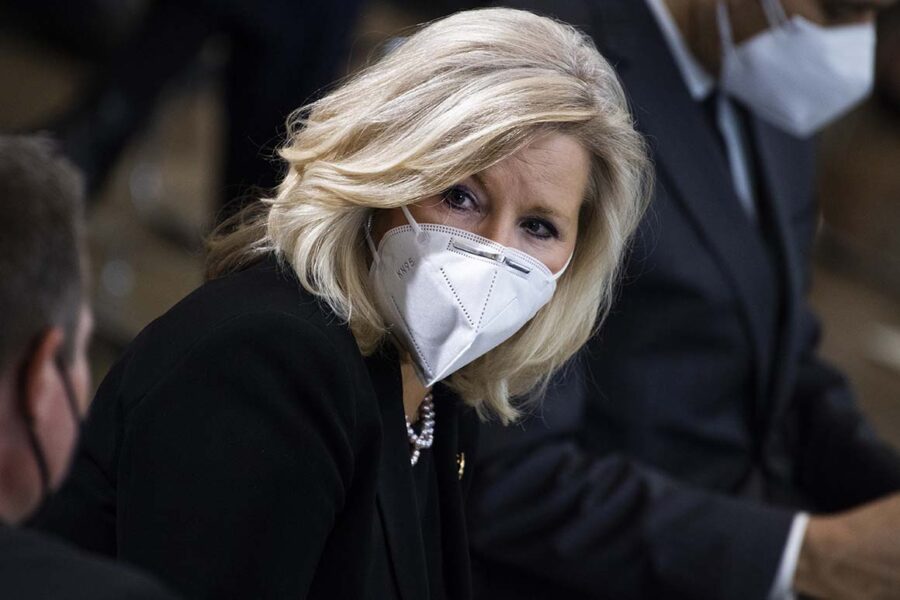 Rep. Liz Cheney’s colleagues are set to boot her from House GOP leadership this month. Now Republicans back in her home state of Wyoming are plotting how to remove her from Congress entirely.

There is no shortage of Republicans eager to take on Cheney in a 2022 primary since her vote to impeach President Donald Trump and her subsequent criticism of him tanked her popularity in Wyoming. But the crowded field is also a risk for the anti-Cheney forces, making it more possible for her to win with a plurality.

That might be the only path back to Washington for Cheney, barring a drastic change of fortune: Internal polling conducted for Trump’s PAC in January and, more recently, for the pro-Trump Club for Growth show a majority of Wyoming Republicans disapproving of Cheney and continuing strong support for Trump.

The collapse in support is a remarkable fall from grace for Cheney, who just last year passed on an open Senate seat in her state to remain in House leadership instead. After ascending to GOP conference chair — the same post her father once held — she was touted as a future House speaker. Now, it’s impossible to call her anything other than an underdog in her own congressional seat.

Trump and his orbit have taken a strong interest in the race, and an endorsement could help clarify the field, which already features four Republicans who have filed to run against Cheney. But more contenders are waiting on the sidelines, and Trump’s political team, according to two people familiar with the efforts, has shown early interest in recruiting a pair of Republicans who aren’t already in the race: attorney Darin Smith, who ran for the seat in 2016, and Wyoming Secretary of State Ed Buchanan.

He said he’s been approached about entering the race and is seriously considering it. “We need somebody, for sure, that will export Wyoming’s values to Washington and not the other way around,” Smith said.

Smith placed fourth in Wyoming’s Republican congressional primary in 2016, when the seat was open, and appears more likely to enter the fray than Buchanan, who would have to forgo reelection as secretary of state to challenge Cheney. The two are unlikely to both jump into the primary, and people close to Buchanan said they think he is leaning against a run.

There are two other candidates already running who have raised a significant amount of money, state legislators Chuck Gray and Anthony Bouchard, and others are interested, but the field is not settled, and there’s desire among Trump allies in Wyoming and Washington to sort out the race quickly. Besides the president’s team, the anti-tax Club for Growth is also eager to get in the race and has been vetting prospective candidates.

“We would have a desire to try to line up with the president’s endorsements and our spending and super PAC to help that candidate really make it a two-person race,” said David McIntosh, the Club for Growth’s president. “If you get a half-dozen different people in the race, then whoever gets to 25, 30 percent wins. Liz Cheney could do that — she’s got a ceiling at about 30 percent.”

The Club polled in the state in late April and found her favorable rating underwater by 36 points, with 52 percent of those surveyed saying they would not back Cheney regardless of who ran against her. Only 14 percent said they would support her under any circumstance.

Support from the Club and the president would arm any candidate with a powerful list of small-dollar donors and, more importantly, the most powerful endorsement a candidate could have in Wyoming. Trump carried the state with roughly 70 percent in both 2016 and 2020.

But there’s still an open question about just how much the field will coalesce after the former president weighs in. In her 2016 run, Cheney got 40 percent of the vote in a nine-way race.

Bouchard has raised some $330,000 since entering the race after Cheney’s vote to impeach Trump in January. Gray has raised less but both had $164,000 on hand at the end of March. Meanwhile, others are considering a run, including William Perry Pendley, an acting director of the Bureau of Land Management during Trump’s time in office.

In an interview, Gray agreed Republicans need to unite behind one candidate. His campaign said he would consider the president’s wishes but declined to say for certain whether he would get out of the race if Trump endorsed someone else.

“Wyoming Republicans are ready to rally around the most proven conservative legislator,” Gray said, touting his work on curbing abortion rights and energy issues. “My record shows that I’m that leader.”

While Cheney is not currently whipping support to beat back the challenge to her House leadership role, she still has formidable political advantages at home and will not be easy to beat. Cheney has a massive network of donors and $1.4 million in the bank. Her father, a former congressman and vice president, is still popular in the state. Former House Speakers John Boehner and Paul Ryan both helped raise money for her, and her donor disclosures are peppered with recognizable names, from former Bush-era Labor Secretary nominee Linda Chavez to political strategist Mary Matalin to Wal-Mart heiress Christy Walton.

While some in Wyoming still grouse that Cheney is a carpetbagger, having moved from Virginia for an aborted 2014 Senate run before winning her House seat two years later, Cheney also has a strong connection with the associations and groups that make up Wyoming’s oil and gas industry, an important sector of the state.

“Whether she’s in leadership, or wherever she’s at, she has a Rolodex of contacts that are pretty impressive. And she can actually move the needle for Wyoming,” said former state Rep. Amy Edmonds, a former Cheney staffer. “She has some powerful industries behind her here in the state, and they’re sticking with her.”

She will also have support from another of the 10 Republicans who voted to impeach Trump in January: Rep. Adam Kinzinger (R-Ill.). His leadership PAC sent a fundraising plea for Cheney this week, and the new Kinzinger-aligned super PAC is also committed to defending Cheney. A person close to the group, which was formed to aid Republicans willing to buck Trump, said its donors view Cheney’s reelection as a top priority.

And then there’s Wyoming’s election law that allows voters to change their registration on the day of the primary. There are not many Democrats in Wyoming — Joe Biden got less than 27 percent of the vote there in 2020 — but that rule would allow Democrats and independents to boost Cheney in her proxy fight with Trump, should they wish.

Rothfuss said he won’t be switching his registration to back Cheney, but he suspects some family, friends and colleagues will.

“I know an awful lot of Democrats, myself included, that gained a great deal of support for her integrity due to many of her recent decisions, votes and statements over the past few years,” he said.