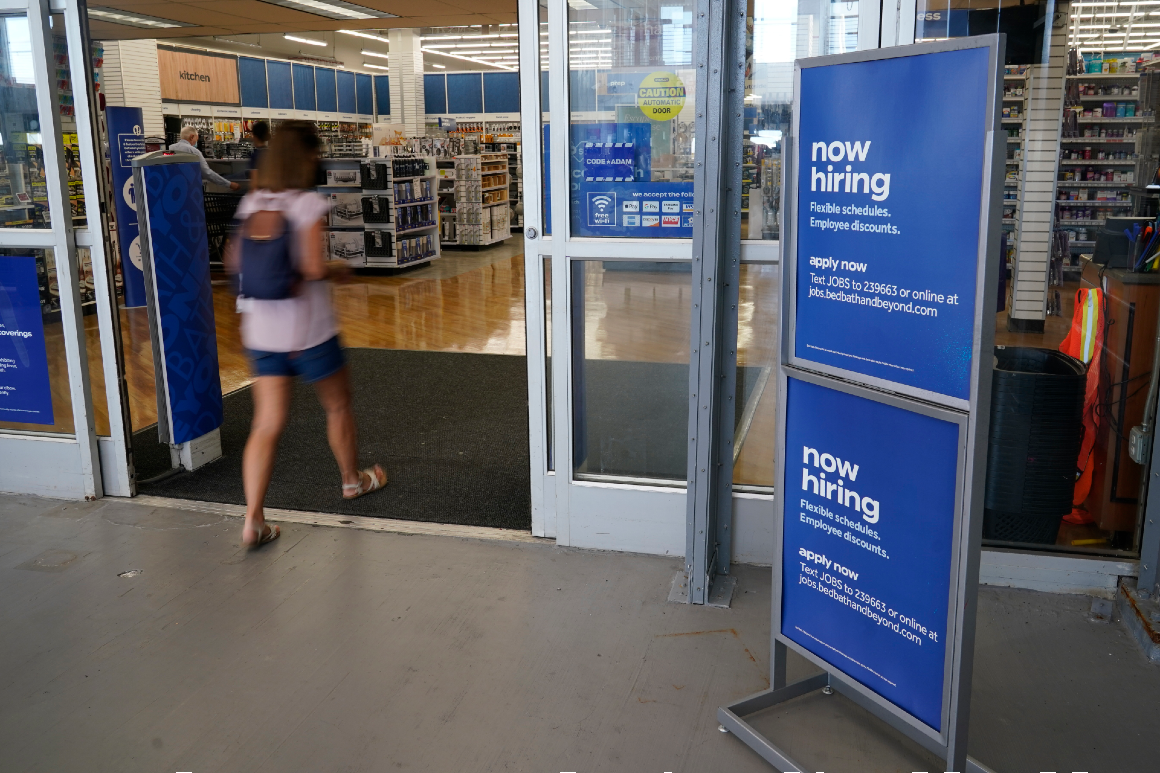 The steady jobs recovery from Covid-19 slowed dramatically in April, stunning Wall Street analysts and raising questions about the strength of the pandemic comeback and the impact of generous unemployment benefits.

The government said Friday that the economy created 266,000 jobs in April — a strong number in ordinary times but sharply below the Wall Street consensus of nearly 1 million, driven by reopenings in the beaten-down leisure and hospitality sectors as vaccinations continue.

President Joe Biden used the report to argue that while the economy continues to recover, it’s critical to pass his American Jobs and American Families plans that would add another $4 trillion in federal spending over the next decade. The plans cover large infrastructure investments as well as enhanced benefits for child care and universal prekindergarten education.

“When we passed the American Rescue Plan it was designed to help us over the course of a year, not 60 days,” Biden told reporters, referring to the $1.9 trillion stimulus package he signed in March. “We never thought after 50 or 60 days everything would be fine. Today there is more evidence our economy is moving in the right direction, but it is clear we have a long way to go.”

The figure for March was also revised down by 146,000 to 770,000. The soft April number embarrassed prognosticators and provided fuel for partisans and economists across the ideological spectrum to declare that their policy ideas were vindicated.

For conservatives, the report suggested that generous pandemic-era jobless benefits are discouraging workers from taking available positions. Several states including South Carolina and Montana are already trimming back benefits packages. Other states may soon follow.

The U.S. Chamber of Commerce used the weak number to call for an end to the $300 supplemental unemployment benefit included in Biden’s most recent stimulus package.

“The disappointing jobs report makes it clear that paying people not to work is dampening what should be a stronger jobs market,” the business group said.

For progressives, the report suggested that corporate America has to step up and offer higher wages and that more government intervention is needed, especially with increased child care benefits, to help workers take the millions of jobs that are open. The dismal number could also mean that workers remain hesitant to return to in-person jobs because of Covid-19 even amid the vaccination campaign.

Or the number could mean nothing much at all.

Monthly jobs numbers, especially coming out of deep recessions, can be highly volatile. And any single number can turn out to be an anomaly reversed in subsequent months. Most other data suggest both a strong recovery and a vibrant labor market. Job creation for May could wind up being far stronger and the April number could be revised higher. In August of 2011 for example, the economy created exactly zero jobs, raising fears of a double-dip recession that never materialized. Steady job growth continued the following month.

So economists suggested caution in drawing any firm conclusions from the April figure.

“There is nothing definitive here and we will know a lot more after the May numbers and we’ll find out whether something real is happening or this is just noise and problems with seasonal adjustments a year after Covid first hit,” said Ian Shepherdson, chief U.S. economist at Pantheon Macroeconomics. “People with big mouths can bang the table and say they know exactly what happened, but they don’t and we won’t know for a while.”

Republicans across the country hammered away at the report as a reason to trim rather than add to current benefits.

White House officials rejected the idea that enhanced benefits are keeping people from going back to work.

“Still don’t see strong evidence of that,” Council of Economic Advisers member Heather Boushey said on MSNBC. “We are not seeing that there are a lot of folks who are not searching because of unemployment benefits. Indeed as this report shows, there was an uptick in labor supply last month, and it still remains a difficult labor market for millions of workers.”

Congress extended several emergency unemployment benefits programs through September as part of Biden’s massive March rescue plan, including Federal Pandemic Unemployment Compensation which provides jobless workers with an extra $300 a week. Some Republican governors have already chosen to cut off the programs to tackle what they call a labor shortage in their states, arguing that the additional aid and the fact that the program doesn’t end until September are keeping workers on the sidelines.

“This labor shortage is being created in large part by the supplemental unemployment payments that the federal government provides claimants on top of their state unemployment benefits,” South Carolina Gov. Henry McMaster said this week. “What was intended to be a short-term financial assistance for the vulnerable and displaced during the height of the pandemic has turned into a dangerous federal entitlement.”

McMaster, following Montana’s Governor Greg Gianforte, announced this week that his state would no longer participate in the pandemic unemployment programs. Georgia and Wyoming officials are also weighing whether to drop out, spokespersons for the states told POLITICO.

The news in the jobs report was not all bad.

The leisure and hospitality sectors, industries that have complained of a job shortage in recent weeks, saw exceptionally strong job growth in April. Workers also saw more hours. According to the Bureau of Labor Statistics, the number of people working part time due to economic reasons fell by 583,000 last month.

Administration officials also tried to focus on the longer-term trend. “If you look over the last three months, though, we’ve added 500,000 jobs per month,” Labor Secretary Marty Walsh said on Fox News. “So the last three months we’ve added 1.5 million jobs to the economy, as compared to the previous three. So, but we still have a ways to go. There’s no question about it. There were some definitely bright sides in this report.”

Politicians of all stripes seized on the numbers to push their preferred economic solutions.

Sen. Elizabeth Warren (D-Mass.) called the report “a stark reminder of what American families know all too well: Child care is infrastructure. If we want moms and dads to go back to work as this pandemic subsides, we need to provide them with the child care they need.”

The April numbers were particularly worrisome for women’s groups concerned that recent gains are getting reversed. “After 2 months of gains in women’s labor force participation, that trend reversed in April,” The National Women’s Law Center said in a statement. “165,000 women ages 20 and over dropped out of the labor force, meaning they are neither working nor looking for work. Meanwhile, 355,000 men ages 20 and over returned to the labor force last month. This means for every woman who dropped out last month, nearly 2.2 men returned.”

Analysts also noted that the report suggested that while jobs are still coming back from the 22 million lost to Covid, layoffs are still happening.

“Recent layoffs (workers unemployed for less than 5 weeks) is still at 2.4 million, suggesting that layoffs are still happening and labor demand isn’t as strong as the anecdotes suggest,” Elizabeth Pancotti, senior analyst at the Senate Budget Committee, tweeted.

Despite the cannon fire between parties over the meaning of the jobs numbers, economists generally agreed that no hard conclusions can really be drawn from a single month.

“This is a pretty shocking report for sure, but it doesn’t really dent my optimism at all,” said Mark Zandi, chief economist at Moody’s Analytics. “You often get these weird, curveball numbers coming out of recessions and this is the month we got the weird curveball. I really would not put a whole lot of weight on this number and would be really surprised if it doesn’t get revised higher.”

Quint Forgey and Louis Nelson contributed to this report.