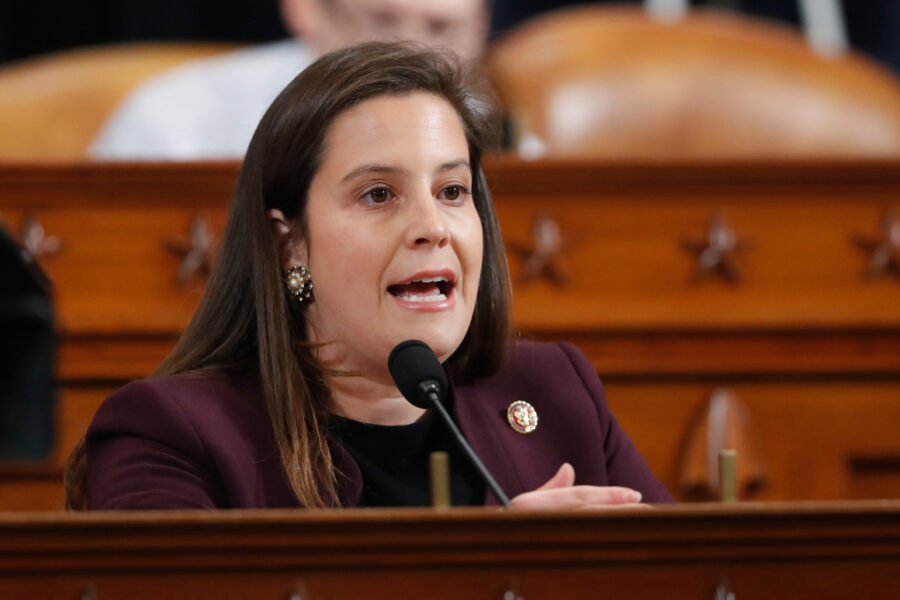 Rep. Elise Stefanik is on the verge of ascending to the House GOP’s No. 3 spot thanks in part to a personal mission: boosting other Republican women.

Stefanik’s most visible identity is that of a moderate New York Republican turned Donald Trump acolyte. But she’s also been instrumental in shifting the GOP’s internal culture to prioritize electing more women to its depleted ranks, a gender imbalance she once dubbed a “crisis” for the party. Following a successful 2020 election cycle aided by Stefanik’s PAC dedicated to that mission, Republicans of all ideological stripes view that model as a winning recipe for seizing back the House next year.

Stefanik’s efforts to promote GOP women have not only added to her star power, but also made her particularly appealing to fellow House Republicans as they move closer to replacing embattled Rep. Liz Cheney (R-Wyo.) in leadership. In fact, Stefanik turns out to have built something of her own base — an impressive 18 of the 30 female candidates endorsed by her Elevate PAC won their races last year, and some are already lining up behind Stefanik as the next House GOP conference chair.

If Stefanik clinches the No. 3 position next week, as is widely expected, Republicans believe they’ll send a message that neutralizes the tricky optics of yanking Cheney from power. It will add new energy to the cause of elevating GOP women, they think, both in the Capitol and at the leadership table.

“She’s definitely the reason why we have a record number of Republican women in our conference today,” said freshman Rep. Ashley Hinson (R-Iowa), who flipped a crucial swing seat in November. “I wouldn’t have been able to build the campaign I needed to in order to win without early support from E-PAC, and her mentorship and her support along the way.”

Hinson, referring to Stefanik’s candidacy for leadership, added that “when I look at her leadership over the past several months since I’ve been in Congress, I think she’s the right person to unify and lead us right now.”

Yet even as the party makes real progress in recruiting and electing more women, the squabble over Cheney’s future has exposed the GOP’s still-lingering weaknesses on that front. The reason Republican leaders were intent on replacing Cheney with another female lawmaker is precisely because the party has no other women in positions of power in the House. Leaders also were careful to tap a veteran Republican woman — Rep. Virginia Foxx of North Carolina — to introduce the formal resolution to oust Cheney, another nod to the uncomfortable dynamic of Republicans dumping their highest-ranking woman.

“It’s dismaying,” said former Rep. Barbara Comstock (R-Va.), who lost reelection in 2018 in a Trump-fueled blue wave. “I think it’s sad to be used by the guys in a way like, ‘OK, we get a skirt to replace a skirt.’ And then now they’re saying, ‘Oh, Virginia Foxx, you put in the resolution to get Liz to step down.’”

And the party’s decision to purge its chief Trump critic from the leadership ranks — while replacing her with a Trump die-hard who objected to certifying his loss — could also help Democrats tie some of the GOP’s most vulnerable candidates more closely to the ex-president. That’s a particular risk in key suburban battlegrounds, where college-educated women fled the party under Trump.

“Nothing puts an exclamation point on the fact that Trump is the litmus test for House leadership than the fact that Elise sought out Trump’s endorsement,” Comstock said. She marveled at Stefanik’s decision “that she needed to” start her leadership bid by sitting for an interview with “the indicted-pardoned Steve Bannon.”

Comstock, who joined Congress at the same time as Stefanik, said her colleague had gone through a transformation: “I don’t recognize her and certainly, I’m not the only one who’s said that.”

Stefanik, 36, was elected in 2014, the youngest woman ever to hold a seat in Congress. She came up in politics through the establishment — as a White House staffer for former President George W. Bush and then as a staffer on former Speaker Paul Ryan’s vice-presidential campaign.

To her once moderate, mostly Republican district, she billed herself as a fresh face and solution to the GOP’s struggles at the time, promising to create jobs and stand with small business owners as part of a new generation of lawmakers in Washington. She spent her initial years appealing to rural, blue-collar voters with more conservative stances on taxes, business regulations and gun rights, while being willing to split with the party in areas like LGBTQ rights and environmental debates that affect her district’s ecosystem and tourism hotbed.

It was against that backdrop that Stefanik embraced the role of Trump defender, drawing praise from party leaders and piles of campaign cash after sticking up for the then-president during his first House impeachment in 2019. Now, she has Trump’s full-throated backing as the next conference chair — an endorsement as good as gold in today’s House GOP, even as some conservatives grumble over her voting record.

“Elise as conference chair gives political boost in a cycle when Republicans are just a few yards away from the majority,” said New York Republican consultant Bill Cortese. “It’s important to have people to relate to you. If you’re talking about bringing more people in and reaching out to millennials, having a woman who is a millennial holding that position is a really good idea.”

Even as she sprang to party stardom under polarizing circumstances, Stefanik was working on a passion project that earned the respect of her colleagues: electing more GOP women to Congress. She formed E-PAC after a stint as recruitment chair for the National Republican Congressional Committee during the devastating 2018 cycle, when Stefanik said she recruited some 100 women to run for the House but saw only a single new one elected to Congress.

In her post-mortem after the 2018 shellacking, she decided women candidates needed help getting through primaries — something that no Republican group offered at that time. That foray led her into a Twitter spat with then-incoming NRCC Chair Tom Emmer (R-Minn.), since the NRCC notably does not get involved in nomination fights.

But by the time Stefanik officially re-purposed her leadership PAC for her new mandate, GOP leadership joined her at her launch of E-PAC in January 2019. By then Emmer was so excited by the idea of recruiting new House Republican women that he leaked the news that Hinson wanted to run for Congress in northeast Iowa.

In total, the 2020 cycle saw the number of House GOP women grow from 13 to 31, with every new arrival backed by E-PAC. (Other outside groups dedicated to boosting female candidates, like Winning for Women and VIEW Pac, were also major contributors to that effort.)

Stefanik has boosted fellow Republicans in ways that go beyond her PAC. She’s one of the top five Republican earners on WinRed, the GOP’s digital fundraising platform. In addition, she’s raised and donated over $2 million to Republican candidates: $1.4 million for women — including for recounts in seats held by Reps. Claudia Tenney and Mariannette Miller-Meeks — and $700,000 for men, a significant sum for a member not in leadership.

It helped that her breakout role in backing Trump during his first impeachment transformed her into a fundraising juggernaut. She raised a seven-figure sum for the sixth consecutive quarter in the first three months of 2021 and has a lucrative email list that includes 30,000 donors, 10,000 of them new ones, with an average contribution size of $25.

That fundraising prowess is a huge asset and selling point as she pitches herself as the new conference chair. And a source close to Stefanik said that once she lands in leadership, “we’re going to blow it up” even more.

Some ultra-conservatives, however, are uneasy that Stefanik has played so aggressively in primary races, which can alienate future colleagues. Yet Republicans, including House Minority Leader Kevin McCarthy and members of the House Freedom Caucus, have lately grown more comfortable picking sides in primaries.

For the most part, Republicans recognize the benefits of getting involved in races early on. And Stefanik allies say she has zero plans to slow down if she lands in the No. 3 chair.

“If you look at us picking up seats in 2020, of course Kevin McCarthy and Tom Emmer were the architects of that, but Elise Stefanik played a huge role,” said Rep. Guy Reschenthaler (R-Pa.), who was actively whipping for Cheney to keep her post in February but is now campaigning for Stefanik.

“Her recruitment of women was key to making sure we have the most women elected in the party ever. That was Elise Stefanik.”

Olivia Beavers contributed to this report.