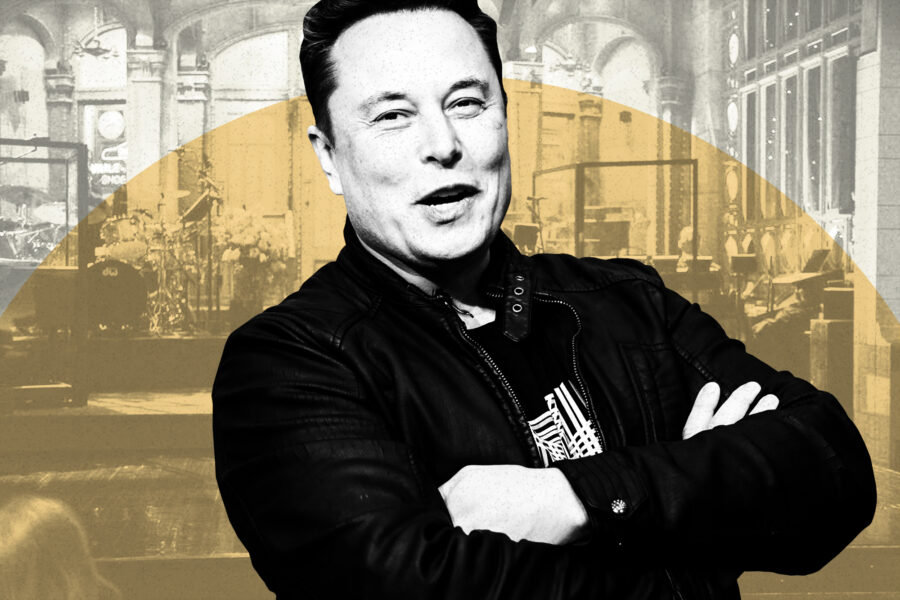 When NBC first announced that the billionaire car-tech-space mogul Elon Musk would serve as guest host for this week’s “Saturday Night Live,” the backlash was swift. Musk has graced the covers of Rolling Stone, Vanity Fair and Time; he’s voiced himself on several episodes of “South Park,” the long-running animated series that shares his irascible, libertarian-minded sensibilities; he’s inspired one of the most ubiquitous icons of our young century’s popular culture. But hosting “SNL”? Simply unacceptable.

Through his companies Tesla and SpaceX, Musk has lived out a little boy’s dream of building fast cars and rocket ships, displaying, at least publicly, the ebullient goofiness to match. In the sunny, hope-and-change early Obama era, he became a cultish nerd icon who embodied the belief that dynamic American capitalism can still accomplish great and novel things. Musk’s projects, which eventually also came to include the hyper-futuristic neurotech startup Neurolink and the tunneling and infrastructure-oriented Boring Company, were a refreshing rejoinder to the criticism that today’s supposed “innovators” don’t actually, you know, make anything.

But to a certain class of progressive over-represented in media and comedy, the mere existence of someone with Musk’s vast wealth (in the $160 billion range, as of this week) is inherently offensive. SNL stars Aidy Bryant and Bowen Yang criticized the decision on social media, the former by way of posting a tweet from Sen. Bernie Sanders describing how the “50 wealthiest people in America today own more wealth than the bottom half of our people.” In that light, Musk isn’t just an eccentric, flawed multi-billionaire, but a walking representation of global income inequality.

Whatever else, the man is certainly eccentric. He appeared on “The Joe Rogan Podcast” and took a vexed-looking hit from a pot-laced cigar, launching a thousand memes. (The SEC slapped him with a $20 million fine for joking in a tweet the month before that he would take Tesla private once its share price reached, wait for it… $420.) He engaged in a jealous vendetta against a diving expert who’d advised the 2018 Thai cave rescue operation. He began dating the influential cool-girl synth-pop star Grimes, infuriating her Bernie-loving young fanbase. They had a child and named him “X Æ A-12.” (It’s pronounced like it’s spelled.)

Along with his unapologetic dedication to the free market and association with right-leaning figures like Kanye West and Joe Rogan, such incidents have made him a reliable culture-war punching bag. But Musk isn’t the first controversial SNL host, nor the most politically fraught — Donald Trump himself has hosted twice, once while a presidential candidate. In the early 1990s, a stint from misogynist shock comedian Andrew Dice Clay led to a boycott from (and the eventual departure of) cast member Nora Dunn. But Clay and Trump, provocative entertainers above all else, have far more in common with each other than they do with Musk, an honest-to-God engineer, aspiring space colonist, and the second-wealthiest man on the planet. It’s far weirder that Musk is joining the show, as if Carl Icahn or Steve Jobs were suddenly tapped to host “American Idol.” Perplexity would seem a more appropriate response than outrage.

And yet: the biggest institutions in both comedy and media are disproportionately young, urbane, and progressive. Since 2016, SNL has affixed itself solidly in the firmament of liberal-leaning late-night television through its relentless tweaking of Trump, as well as a series of occasionally bizarre and earnest political statements. Despite SNL’s eternal thirst for buzz, turning to an Ozymandias-esque capitalist like Musk would have been an awkward fit even in the cooler atmosphere of the pre-Trump era. (It didn’t help, of course, that he piped up on Twitter immediately after his hosting gig was anounced, floating the idea of a presumably derisive sketch about “Woke James Bond.”)

Even as mainstream comedy is increasingly wracked by concerns about equity, representation, and “punching up” or down, SNL occasionally betrays its genesis in the more anarchic world of post-Watergate 1970s showbiz. With that legacy in mind, bringing on Musk is simply the price of doing business — that is to say, staying in headlines like the one affixed to this story.

The loathing Musk inspires from the left is uniquely intense and personal, not unlike that directed toward his fellow techno-optimists in the Democratic Party like Andrew Yang and Pete Buttigieg. Musk shares their cardinal sin: that of cringe, an obliviousness toward, or unwillingness to acknowledge, the tastemakers who define pop culture at its highest level — which increasingly includes policy positions, like police abolition or massive wealth redistribution. Musk has remained stubbornly committed to a brash and vague tech-bro libertarianism that was already wearing out its welcome among cultural elites in 2011, and seems fully retrograde in the world of 2021.

Musk’s arc as a public figure serves as a neat lesson in how and where the battle lines of our current culture wars came to be drawn.

Before evaluating his cultural impact or status, it’s worth asking: What does Elon Musk actually do?

Arriving in the United States from his native South Africa (by way of Canada) in the early 1990s, Musk was at first like any number of other young techies striving to make it in Silicon Valley during the early days of the World Wide Web. An early success with an internet city guide startup led to co-founding “X.com,” one of the first federally-insured online banks, which eventually led to a merger with the competitor Confinity — itself co-founded by Peter Thiel, who would later become a far more direct liberal antagonist than Musk himself.

Confinity boasted a money-transfer service of which you might have heard: PayPal. Both Musk and Thiel are members of a cohort known as the “PayPal Mafia,” men who used their money and connections from the service to launch companies like YouTube, Yelp, and LinkedIn. After a bout of corporate musical chairs Musk departed the company in 2000, eventually receiving a payout of more than $100 million. That helped him seed the two companies he’s still best known for: Tesla, the pioneering electric car company, and SpaceX, the rocket, satellite and aeronautics manufacturer.

But Musk cut a significantly different cultural figure than other 21st century tech tycoons like Mark Zuckerberg and Jeff Bezos. Where Bezos brought us same-day delivery of cat food and laundry detergent, and Zuck developed a forum for meeting other Ravenclaw Clinton Supporters In Peoria, Illinois (CLOSED GROUP NO LURKERS), Musk’s investments are capital in the truest sense of the term — requiring construction and manufacturing at a mass scale, while looking forward, not backward like so many of those who hope to re-industrialize our increasingly service-oriented economy.

Some of the ire Musk has earned is serious. Black workers at Tesla accused the company of a culture of racism. Various investigations revealed unsafe conditions at the company’s futuristic, highly-automated factories, and Teslas have experienced a series of high-profile safety incidents that have deepened the perception of Musk as a corner-cutting flim-flam artist. Critics have also accused him of hypocrisy for his relentless cheerleading of cryptocurrency, the energy-intensive production of which could undermine Tesla’s ostensibly eco-friendly mission. (Studies find cryptocurrency mining responsible for a miniscule fraction of annual CO2 emissions.)

There’s also the matter of his rabid online fanbase, which treats any affront to their chosen ubermensch as personal and responds in trolling kind. His brand of celebrity is tailor-made to scramble the brains of his detractors: a futurist whose cultural attitudes are stuck in the past; a tech genius who tweets (frequently, nonsense) in the erratic style of a non-digital native; a guy who hangs out with Joe Rogan but is “super fired up” about the Biden climate agenda. As Insider columnist Josh Barro pointed out amid the initial outcry over his SNL appearance, Musk’s uncouth attitude and gauche bear-hug of market capitalism frequently blind his liberal critics to how his fundamental mission of scientific and environmental progress is perfectly aligned with theirs.

These contradictions, along with his cultural transgressions and alleged ethical shortcomings as a capitalist, make him a perfect target for the hyper-progressive, image-conscious social media mavens that shape our media landscape.

It’s a position shared by a sizable number of Americans, but a decided minority of them. According to a recent Vox/Data for Progress poll, “68 percent [of Americans] say they disagree that it’s immoral for a society to allow people to become billionaires.” They’re especially warm and fuzzy, as it turns out, when it comes to Musk himself: his net approval rating among the general public is +27 points — behind Bill Gates, but ahead of Bezos and Zuckerberg — and 52 percent of Democrats see him favorably.

The extent to which SNL’s decision to invite him was baffling depends on one’s perspective. Inside the bubble the show inhabits and largely embodies, it was a betrayal of core principles. Outside, it was just another celebrity news item about the raffish eccentric who builds rockets and tweets all day about Dogecoin.

Musk’s actual appearance on SNL, however potentially awkward, will likely result in much less heat and light than the controversy surrounding it. In their definitive oral history of the show, “Live From New York,” Tom Shales and James Andrew Miller quote the series’ creator Lorne Michaels on the Dice Clay controversy. “You don’t invite somebody to your house to piss on him,” Michaels said. “[T]his person has put themselves in your hands, they’re completely vulnerable, the show only works if they look good, so why would you have anybody over that you don’t like? What — because you need the ratings? It doesn’t make any sense.”

And so will Musk be treated, even by the cast members who couldn’t conceal their disdain for his presence — none of whom, it should be noted, chose to follow in Nora Dunn’s footsteps and exclude themselves out of principle. The controversy around his appearance reveals the extent of the non-representative filter bubbles that social media has allowed Americans to place themselves in, not least those at SNL who are among Musk’s critics. They, to echo the apocryphal Pauline Kael comment about Nixon voters, likely don’t have a representative number of people in their lives who see him not as a uniquely malevolent entity, but as an entertaining futurist with admitted personal flaws.

In that light, Musk might find himself in an unusual role when he takes the stage at 30 Rock to deliver the show’s opening monologue: That of an emissary from reality.