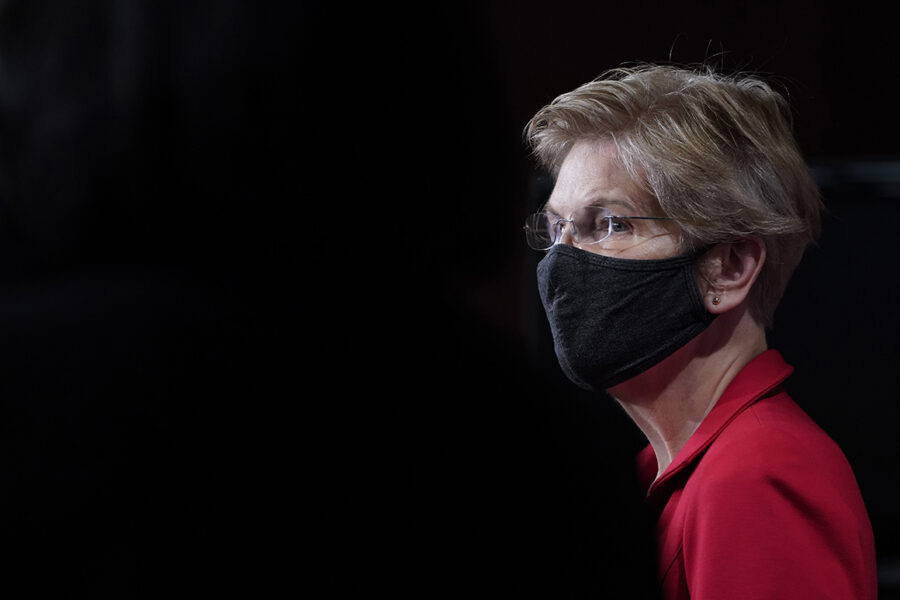 In a move that may surprise some ambitious Massachusetts Democrats, Sen. Elizabeth Warren says that she’s going to run for reelection in 2024.

“Yep,” the 71-year-old said simply in a POLITICO interview Friday, when asked if she planned to make the run.

That answer came as some Massachusetts Democrats have been gaming out a competitive primary in a few years that could include figures like Rep. Ayanna Pressley and former Rep. Joe Kennedy III. Two well-connected Bay State Democrats said in interviews that they still wonder if Warren might change her mind in the end.

After all, Warren did spend the past two years trying to leave the Senate: the presidential campaign, her auditioning to be vice president, and then the push to be Biden’s Treasury Secretary.

The failure of those recent efforts seems to weigh heavily on Warren these days, who addresses some of her disappointments in her new book “Persist.”

The book is Warren’s attempt to grapple with a difficult couple of years, while defending some of the positions put forth during her presidential campaign. The book has a confessional tone, and it comes at a time when many people in the Democratic Party — including some Warren supporters — believe she’s at a political crossroads.

The acknowledgments are not immune either. “Campaigns are hard — losing campaigns are even harder,” she writes while thanking various friends and aides.

But asked if she’d do anything differently, Warren says “not really.”

Does that mean she thinks there wasn’t ever a path for victory? “Look, we know the outcome, but I didn’t make it. I know that,” she said in the interview via Zoom, wearing a light-brown zip-up hoodie.

In the book, she admits to making some strategic mistakes. “I was wrong to take the test,” she writes of the DNA test she took to try to settle questions about her past claims of Native American ancestry.

And she mentions other factors that hurt her but doesn’t hone on a single thing. She notes that she never recovered from the Medicare for All debate and the headwind of trying to be the first woman president (“So far as I know, no one ever asked the men in the 2020 race if they felt they were treated differently because they were men”).

She says that both Bernie Sanders and Joe Biden had bases of loyal supporters that made it hard for any other candidate to break through in the race. Warren also writes that “There’s always another possibility, a much more painful one: in this moment … maybe I just wasn’t good enough.”

Warren’s defeat has been followed by other changes that have left her trying to find a path forward. Many of her longtime staffers have moved on, some to join the Biden administration, and there are many new faces in her office. By virtue of coming in second in the presidential primary and his perch atop the Budget Committee, Sanders has emerged as the leading progressive in the Senate. If Biden runs for reelection as he has said he expects to do, the window for another White House run wouldn’t open until 2028, when she’ll turn 79.

Warren’s book is the latest evidence that, even as Democrats control the White House and Congress, there are lingering divisions stemming from the 2020 primary, particularly among progressives. The strong candidacies of both Warren and Sanders fueled the hopes of progressives for one of their own to lead the party, but the two candidates ended up at odds. And many former staffers from both campaigns continue to blame the other for their loss, at least in part. The current state of the relationship between Sanders and Warren seems to be more cordial than warm.

“Bernie and I are friends and we’re doing great,” Warren said in her POLITICO interview, while declining to elaborate.

Tensions between the two flared up in Iowa just weeks before last year’s caucuses when Warren confronted Sanders after a debate about his denial of her claim that he told her he didn’t believe a woman could defeat Donald Trump.

“I think you called me a liar on national TV,” she said.

“You called me a liar,” he shot back.

Behind the scenes, however, the feud had been escalating for months and the bitterness has only been partly revealed. In September 2019, when Warren was at her peak in the polls, she called Sanders personally and told him that she felt his people, staffers included, were being increasingly toxic and attacking her. Sanders disputed that and retorted that her people were also going after him, according to someone familiar with the dispute.

“I’m not going there, I’m just not looking back,” Warren said in her POLITICO interview, when asked about the call. Her book’s acknowledgments include a subtle reference, however, to her frustration with Sanders’ staff. Speaking of her former campaign team, she writes that “you showed that it’s possible … to be respectful and friendly to those who are working for rival campaigns.”

Warren doesn’t mention the fallout with Sanders much in her book but the divisions between them remain clear. Warren writes — with the passive voice — that “it leaked that Bernie had told me that a woman couldn’t win.”

Sanders denied that at the time. “It is ludicrous to believe that at the same meeting where Elizabeth Warren told me she was going to run for president, I would tell her that a woman couldn’t win,” he said. “What I did say that night was that Donald Trump is a sexist, a racist and a liar who would weaponize whatever he could.”

Soon after the debate clash, liberal Rep. Pramila Jayapal (D-Wash.) announced she would endorse Sanders over Warren. Jayapal later told others that she felt Warren had questioned her feminism when she called the Massachusetts senator to explain her decision, according to a person Jayapal told at the time. Jayapal’s office declined to comment.

Warren addresses other campaign controversies in the book. On the creation of the $14 million Super PAC that kept her afloat after Sanders outpaced her in the initial contests, Warren writes that “a stunningly generous woman put $14 million into a super PAC.” After running a campaign attacking the influence of the wealthy and powerful in politics, Warren justifies the existence of the Super PAC on the grounds that other candidates had outside help too or were self-funding.

Former Sanders officials remain angry that Warren didn’t endorse Sanders after she dropped out, because of their shared progressive values. Asked in the interview why she initially chose not to endorse any candidate after she withdrew, Warren sighed and gave an uncharacteristically slow, halting answer. “There were a few more states to vote,” she said. “I knew I wanted to wait until there was just one person in the race, and get 100 percent behind that person.”

It’s ironic that that person ended up being Biden. Warren’s political career began in part because Biden supported a reform of the bankruptcy code that she long fought against. “Joe Biden was on the side of the credit card companies,” she said in 2019. In some ways, her career was defined by being a non-Biden type of Democrat.

But Biden’s presidency has been a pleasant surprise for progressives including Warren. In the interview, Warren explains Biden’s evolution as him “meeting the moment.”

Even as Warren has been encouraged by Biden’s presidency so far, the way he won appears to continue to frustrate her. Biden’s emphasis on his personal traits and experiences contrasted with her focus on detailed plans and policy proposals. “This is really about character and values as opposed to issues and ideology,” Biden’s chief strategist Mike Donilon told The New York Times in July 2019.

Warren’s “plans”-based approach enthralled many college-educated voters but did not catch on with much of the Democratic base. She still feels releasing the 81 plans was the right thing to do but wrestles with why voters didn’t reward her.

“I often wondered why other candidates didn’t have detailed plans for the future,” she writes in her book. “Maybe the more puzzling question is why people running for office so rarely campaign on plans — and why that’s apparently okay with millions of voters.”

It’s a frustration that comes up repeatedly. “If you decided to run for president and wanted to get a ton of things done, wouldn’t you need a lot of plans?” she writes. “To me, that’s what it means to be a serious candidate for president — you show your plans,” she continues.

She acknowledges that the politics can be tricky. “Plans force us to make choices but also create targets — which we then have to defend,” she writes. Pressed on whether she thinks detailed plans are bad politics, she said in the interview: “I don’t think so.”

Asked about Donilon’s theory of the case that voters prefer values to ideology, she pushed back. “I don’t think there’s a tension between having good solid detailed plans and values,” she said. “The plans are the physical manifestation of those values.”

She warns in the book that the consequences of not having good plans will be catastrophic: “I write knowing with absolute certainty that if we fail to make major changes, we will plunge our nation and our planet into an abyss from which we cannot escape.”