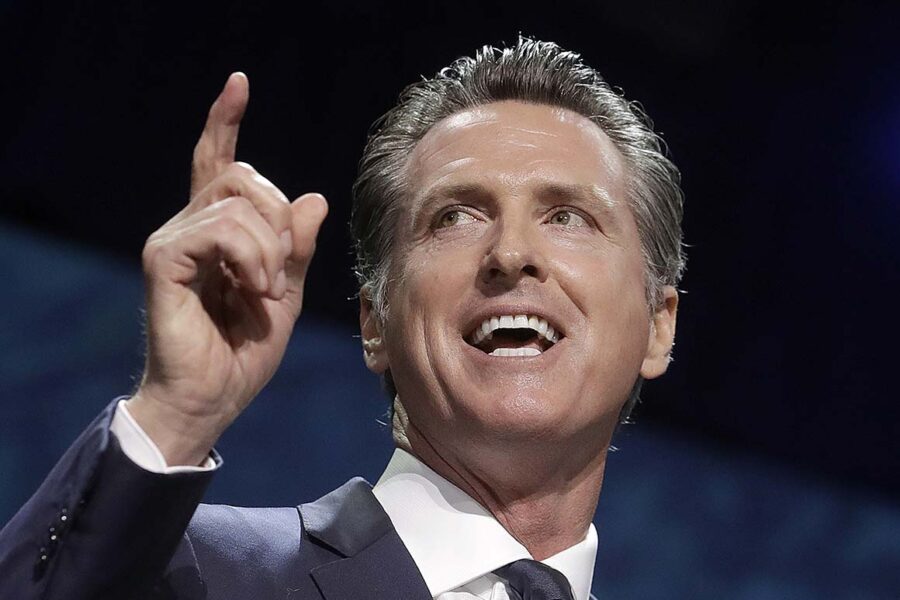 OAKLAND — Nothing smooths out political turbulence like having money to spend.

California Gov. Gavin Newsom embarked on a cross-state road show Monday to trumpet the fruits of an astonishing $75.7 billion state surplus thanks to soaring capital gains during the pandemic. His first order of business: tell Californians he wants to give them cash and pay some of their utility bills.

The stimulus play demonstrates how an unexpected windfall offers the Democratic governor a powerful tool to ward off a recall threat. Checks would arrive in voters’ mailboxes not long before ballots do this fall.

“It’s very significant, and it dovetails into the general perception that we are coming out of the pandemic, the worst is behind us, the future looks brighter as evidenced by the checks the public will soon receive,” former Gov. Gray Davis, who was recalled in 2003, said in an interview Monday. “It all flows into the same narrative that the problems are mostly behind us today and will be substantially behind us come this fall.”

California’s record windfall is a product of its prosperous tech sector, high share of professional workers and steeply progressive tax structure. While unemployment remains higher in California than in most states because of job losses in its travel and service sectors, upper-income earners had a boom year as they adapted to remote work and enjoyed another surge in the stock market.

The windfall is so great that it is likely to trigger a 1979 vestige of California’s anti-tax movement that hasn’t been invoked for more than three decades. Under a constitutional spending cap known as the “Gann Limit” after fiscal conservative Paul Gann, the state must refund taxes and direct more money to schools once revenues top a certain level.

Besides the surplus, Newsom touted $26 billion in direct state aid from the federal stimulus plan that Democrats passed in March. He’s including that in a $100 billion package he’s labeling his “California Comeback Plan.” Senate Minority Leader Mitch McConnell suggested in December that the federal package would “supply the Governor of California with a special slush fund.” It drew new attacks on Monday after Newsom’s announcement.

“This is one more reason why borrowing and sending tens of billions to California was a crying shame — and why every Republican in Congress opposed it,” Sen. Mitt Romney (R-Utah) said on Twitter.

California’s strong budget marks just the latest difference between the 2021 recall election and the one 18 years ago. While many people remember that rolling blackouts soured voters on Davis, the state’s rickety finances may have been the final straw. Staring down a record budget deficit, the Democrat cut spending and then made the politically perilous decision to enact a California vehicle tax hike — essentially the opposite of what Newsom is proposing by giving cash back to residents.

Newsom sidestepped a question Monday about how the proposal might buttress his efforts to defeat an all-but-certain recall vote. Instead, he returned to a regular theme of touting California’s minuscule coronavirus rate, its brimming budget and its accelerating pace of job creation. Those are all pieces of evidence for his central pitch to voters of a revivified California “roaring back” from the pandemic. Stimulus checks give more weight to that argument.

It didn’t take long for Republican recall backers to take credit, with some already dubbing it the “Recall Refund.” “Chalk another one up for the pressure of the recall on Gavin Newsom’s policies,” stated an email from the official proponents.

They were unmoved by Newsom’s effort to channel $600 checks to some two-thirds of state residents in households making up to $75,000, along with $500 to families with dependents. Republican consultant Dave Gilliard, who worked to qualify the recall, argued that Newsom’s paean to taxpayers demonstrated the governor had become “a born-again tax-cutter because of the recall.”

“That’s not exactly what you expect to hear from one of the most liberal governors in the country,” Gilliard said, but he predicted it would do little to sway voters who have become accustomed to stimulus checks during the pandemic.

“It’s going to look like a stunt,” Gilliard said, and “I don’t think they’re going to give [Newsom] a whole lot of credit for it.”

However voters react, Newsom is unquestionably in a stronger position than Davis was before voters toppled him in 2003.

Davis’ efforts to balance the budget alienated both allies and foes. Budget cuts antagonized Democrats while conservatives attacked the car tax hike, rallying voters against a concrete hit on their wallets. Arnold Schwarzenegger, who ultimately toppled Davis, made the car tax a symbolic centerpiece of his campaign and derided Davis to great effect when he crushed an old car with a wrecking ball just before the election.

“He was forced to slash a lot of programs in the Legislature, so he was making enemies on the left and enemies on the right,” Maviglio said. “When you have an angry left and a Democratic governor, that’s not a good equation.”

Susan Kennedy, who worked for both Davis and Schwarzenegger, argued that Davis was hamstrung by the budget crunch following a series of disasters like blackouts and the Sept. 11 terrorist attacks. By contrast, Newsom will face a vote as California emerges from the coronavirus cataclysm on sturdy footing.

Newsom “is facing the largest windfall in state history after having steered the state successfully through a global health crisis that shut the world economy down,” Kennedy said in an email. “He’s going to get a lot of credit for that with voters if he keeps the state open and handles the surplus well.”

The Democratic governor is also in better position because polls continue to show that more voters oppose the recall than want to remove Newsom. That was not the case for Davis in 2003 months before the recall election.

“With Gray, it went on for two years, and the cause was just seen as Sacramento and Washington dysfunction. It was just more diffuse,” Kennedy said, adding that the car fee increase carried similar symbolic weight to Newsom’s stimulus checks. “It became the standard-bearer issue. It was so perfectly symbolic for why Democrats don’t think Republicans manage finances well.”

The $100 billion should satisfy Newsom’s Democratic base, which has called for everything from homeless support to Medicaid for undocumented residents. By comparison, Democrats in 2003 ultimately fractured, with Lt. Gov. Cruz Bustamante reneging on a promise not to run and then finishing in second. Newsom has sought to hold his party together and forestall a Democratic candidate from entering the race — a task that’s much easier when the state has money to spend.

Underscoring that unity on Monday, Newsom was flanked by state lawmakers who chair the Legislature’s budget committees and will thus be his principal budget negotiating partners. They showered praise on his proposals, as did Oakland Mayor Libby Schaaf.

“Direct aid to people is what is going to get our economy roaring back,” Schaaf said, hailing “one of the greatest California budgets we have ever seen.”