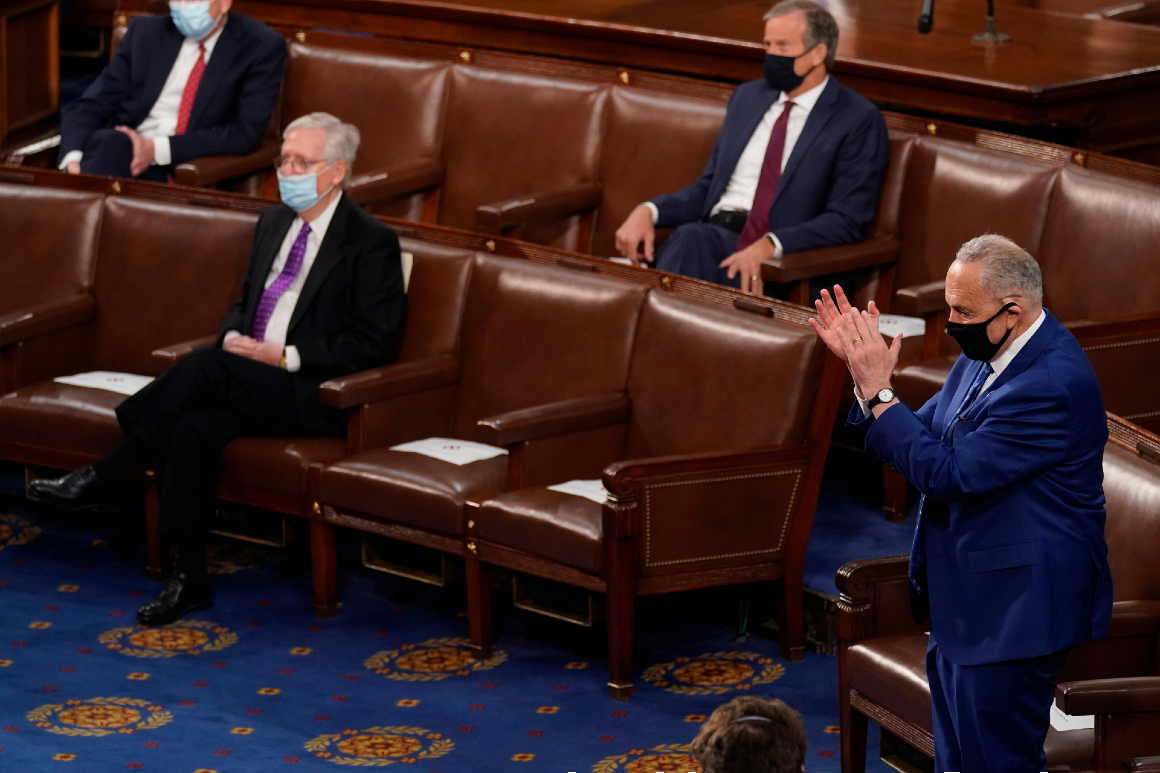 In dueling remarks, Chuck Schumer and Mitch McConnell each accused the other’s party of trying to weaponize voting laws to expand its political power. They often clash indirectly on the floor, but the Schumer-and-McConnell show on Tuesday served as a preview of a forthcoming floor fight as Democrats push forward on the elections bill they’ve given the symbolically meaningful number of S. 1.

The legislation is a top priority for the party, particularly its progressive base. Democrats say they must act soon to rein in laws pushed by GOP-controlled state legislatures that are designed to restrict access to voting. But the sprawling proposal that the committee took up on Tuesday also faces significant pushback, from state election officials to Sen. Joe Manchin (D-W.Va.) — whose vote is a must-have.

Schumer used his testimony to raise the stakes of a battle against Republican state laws that he said “carry the stench of oppression” by limiting voting availability. He implored the GOP: “Are you going to stamp it out or are you going to allow it to be spread? I plead with my Republicans, think twice. I plead with Leader McConnell: think twice.”

McConnell retorted that Democrats wrote their elections bill in response to the results of the 2016 election and that their “supposed rationales [for it] have changed constantly.”

“Our democracy is not in crisis, and we’re not going to let one party take over our democracy under the false pretense of saving it,” the Senate GOP leader said. “The Democratic Party wants to rewrite the ground rules of American politics for partisan benefit.”

Tuesday’s markup lasted hours as Republicans sought to offer more than 100 amendments. While Schumer has vowed to take the bill to the Senate floor, its ultimate fate remains uncertain at best. The Senate Rules Committee tied on whether to advance it out of committee, which means Schumer will need to discharge it.

“It should be the view that everyone has that unless you’re prepared to change the rules of the Senate, this federal takeover of the elections doesn’t have any hope of passing,” said Sen. Roy Blunt (R-Mo.), the top Republican on the Rules Committee.

Manchin remains the only Senate Democrat to not publicly sign on as a co-sponsor of the bill. But even if he does eventually get on board, the elections measure is still short of the 10 GOP votes necessary to overcome a filibuster. Privately, Senate Democrats and senior aides have agonized over the bill, with no clear path for it to become law.

Senate Democrats are set to hold another caucus meeting on the elections package on Thursday. Manchin, as well as some members of the Congressional Black Caucus, has urged the party to shift its focus to a voting-rights-only bill named for the late Rep. John Lewis (D-Ga.) that has a slightly higher chance of winning GOP support.

If enacted into law, the legislation would amount to a sweeping overhaul of federal elections across the country. It would mandate in-person early voting in all states, require that states offer no-excuse absentee voting and institute automatic and same-day voter registration across the country, among other provisions. In addition, it would require most states to create independent redistricting commissions for future cycles.

Some election administrators who support the ethos of the bill have also quietly grumbled about its sweeping mandates, arguing that some are impossible to overcome. A manager’s amendment put forward by Sen. Amy Klobuchar (D-Minn.), the chair of the Rules Committee, was introduced to mollify some of those concerns, pushing back some deadlines and broadly granting more leeway to smaller counties. But that amendment failed in a tied vote.

The elections proposal was given the first designation in both chambers — S.1 in the Senate, and H.R. 1 in the House. It passed the House on a near-party line vote in March, after going through the lower chamber in the 116th Congress and dying in the Senate without a vote. President Joe Biden has repeatedly spoken in favor of the bill, calling for Congress to send it to his desk during his first joint address. Republicans, however, have vociferously opposed the bill, and argue it amounts to a “federal takeover” of the U.S. election system.

The bill would also alter the Federal Election Commission, the nation’s chief campaign finance watchdog that is routinely criticized by good government groups as functionally toothless. Among its provisions is the addition of a public financing option that remains controversial among some Democrats on the Hill.

McConnell, in an unusual move, stayed for most of the hearing and offered three amendments. The first amendment would undo the bill’s FEC provisions and cap the tenure for commissioners at 12 years; the second would change its disclosure requirements; and the third would redirect the legislation’s public funding to the opioid epidemic. All three amendments failed in tied votes.

While the vast majority of amendments failed, less than a dozen made it through. Among the amendments the committee approved was a proposal from Sen. Shelley Moore Capito (R-W.Va.) that would strike a provision in the bill that required members of the military overseas return paper ballots by mail. Another amendment from Sen. Mark Warner (D-Va.) would require a report from the Attorney General on the effect of widespread mail-in voting on service members.

After former President Donald Trump’s repeated false claims about widespread fraud in the 2020 election, and Republican-led legislatures advancing bills in states like Georgia and Florida that would restrict access to voting, some Democrats view the election measure’s passage as an existential necessity for the party. The bill is getting heavy promotion from voting rights- and campaign finance-focused groups like the Brennan Center for Justice and Common Cause, and it’s becoming an animating force among much of the Democratic base.

Manchin has called for Democrats to find common ground on voting rights legislation, repeatedly calling for bipartisan negotiations with Republicans on the more narrowly-focused bill named for Lewis, but many Democrats believe that’s an impossible ask.

Some voting rights advocates have joined the handful of Democrats quietly agitating for a change in strategy, asking party leaders to turn their attention to the John R. Lewis Voting Rights Act. Some prominent Black Democratic lawmakers have argued that the Lewis bill would be an easier sell, by either winning nominally more Republican support or by making a starker case for why changing the filibuster is necessary.

This bill named after the late civil rights icon would restore a requirement that certain states and jurisdictions get election changes pre-cleared by either the Department of Justice or a D.C. court before they can take effect.

In 2013, the Supreme Court effectively ended that requirement, ruling that the formula to determine which states and other jurisdictions were covered by it was outdated. The coverage formula had been sparsely updated since the bill passed, and the Lewis bill would create a new one.

The bill has yet to be re-introduced in the House after passing on a mostly party-line vote out of the lower chamber in the previous Congress. Pennsylvania Rep. Brian Fitzpatrick was the lone House Republican to vote for the bill, while Sen. Lisa Murkowski (R-Alaska) co-sponsored it in the upper chamber. Democratic House members leading the charge for the Lewis bill say they’re in the midst of robust fact-finding to defend it from legal challenges, should it become law.