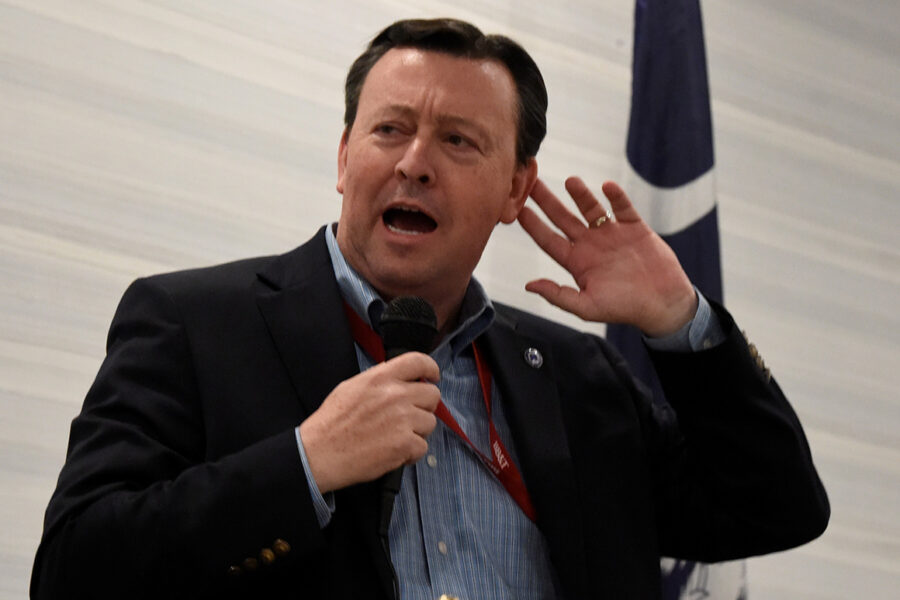 Pro-Trump lawyer Lin Wood’s bid to bring “chaos” to South Carolina’s GOP was halted on Saturday when he failed to unseat the party’s chairman after baselessly accusing the incumbent of voter fraud and a host of other slurs.

Chairman Drew McKissick’s reelection was not in doubt among knowledgeable Republicans who say the party delegate rules favor longtime insiders. Wood, an accomplished trial lawyer from Georgia who turned into a conspiracy theorist, moved this year from Georgia and mounted an unexpectedly strong candidacy for a complete outsider.

McKissick beat Wood by a final vote of 68-28 percent at the low-key socially distanced convention in Columbia, where coronavirus social distancing rules prevented the delegates from meeting in one large hall — something Wood pushed for to take advantage of his fire-breathing, crowd-riling style. Votes were held in satellite meetings throughout the state’s 46 counties.

“Drew is a cheater,” Wood, without evidence, said to his huge following on Telegram before the vote. “If he ‘wins’ today, he will be a Fake Chairman just like Biden is a Fake President!”

After the vote, Wood swiped at McKissick for telling the truth at a recent forum where he admitted Joe Biden was legitimately elected president: “Congratulations to Drew ‘Biden Won’ McKissick. Drew won the delegates in an establishment created election. I won We The People. Drew will learn in time that ALL the power belongs to We The People.”

In a statement released by the state party, McKissick said: “Thanks to the grassroots activists across the state, the SCGOP is stronger than it’s ever been. … Now we can roll up our sleeves to continue what we do best–win elections.”

Wood’s constant attacks on McKissick, whom he trashed with a host of dark but vague innuendos, concerned some old-time Republicans because Wood attracted crowds of hundreds of conservatives who, though not delegates, could be led astray by Wood undermining the party leadership and spreading conspiracy theories at his events, which also featured National Security Adviser Mike Flynn and My Pillow CEO Mike Lindell, who are associated with the Q-Anon movement.

Wood, a high-profile defamation lawyer, had sought to portray McKissick as not doing enough to support Trump after the November elections. McKissick, though, was twice endorsed by Trump after Wood entered the race — the final time on Friday — as Wood tried to cast doubt on the truth of the endorsements.

McKissick canceled the state party primary in 2020, allowing Trump to take the state’s delegates unopposed. South Carolina holds outsized importance on the primary calendar, as it’s traditionally the first such contest held in the South.

LaPierre, a former senate candidate, ditched his clean-cut look from 2020 and took to wearing a coonskin cap during this race, earning him the nickname “Davy Crockett” from Wood.

Considering Wood’s charisma and McKissick’s stature in the party, LaPierre’s cap was understandable in South Carolina’s “circus” of a GOP chairman’s race, according to veteran Republican strategist Luke Byers.

“If you’re that guy, what are you going to do for attention?” Byers said. “You might have to wear a coonskin cap.”