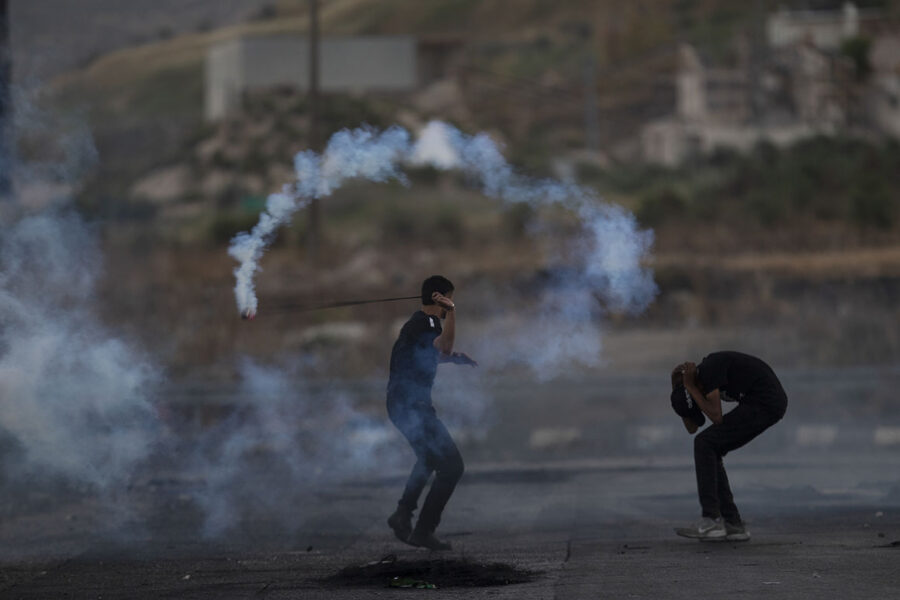 The Biden administration would like Israelis and Palestinians to “calm” down. Ideally, a “sustainable calm” that comes because the two sides “deescalate tensions” and bring a “halt to the violence.”

In speeches, interviews, tweets and call readouts, President Joe Biden and his aides have used some version of the above terms more than 40 times during the past week.

But what about “peace,” “peace talks,” or even “cease-fire”?

As the body count rises in the latest Israeli-Palestinian clashes, Biden and his aides’ public commentary offers a sobering reminder of how low the new U.S. administration has set its expectations for helping resolve the broader, decades-old Mideast conflict. The administration made clear early on that the Israeli-Palestinian crisis was not going to be a top priority, and it has struggled to keep up with the fast-moving violence that spiraled a week ago.

Along the way, Biden aides have made fleeting references to standard concepts like a two-state solution or the need for “peaceful coexistence” in Jerusalem. They have, notably, said on several occasions some version of how Palestinians and Israelis deserve “equal measure of freedom, prosperity and democracy.” And on Monday, Secretary of State Antony Blinken went further than most of his colleagues, suggesting the U.S. may try to reinvigorate the Israeli-Palestinian peace process.

But overall, the administration’s language suggests that the end goal remains merely to defuse the current crisis, not tackle the bigger, deeper, more existential one.

And even then, the messages are mixed.

For instance, the Biden team hasn’t coupled its appeals for “calm” with public demands for a cease-fire, and it has blocked U.N. Security Council statements calling for a cessation of hostilities. That has raised questions about the administration’s motives while hurting Biden’s standing among Palestinians and some Democrats.

Biden himself appears to be setting a low bar. In a recent statement, Biden spoke of the need for Palestinians to have “freedom, prosperity and democracy” just like Israelis, but he then pledged “to work toward sustained calm.”

That led to furious retorts, with some activists and analysts noting that phrases like “calm for calm” and “quiet for quiet” have been used in the past to describe what only prove to be temporary détentes in the conflict.

As of Monday, “calm” did not appear on the horizon.

Overnight, Israel unleashed another barrage of airstrikes on the densely populated Gaza Strip. Israel is trying to destroy the network built there by the Palestinian militant group Hamas, which controls the coastal territory and has been firing rockets at Israeli territory for a week.

Overall, more than 200 Palestinians have been killed, many of them children, with more than 1,000 wounded, according to The Associated Press. In Israel, at least 10 people have been killed amid the rockets, many of which Israel has managed to intercept.

The conflict escalated dramatically last Monday after brewing for weeks due to tensions between Palestinians and Israelis over access to holy sites in Jerusalem and the potential eviction of several Palestinian families from their longtime homes in east Jerusalem.

On Saturday, Israel destroyed a high-rise Gaza tower that housed several media organizations, including The Associated Press and Al Jazeera. Israeli officials say there were Hamas assets located in the same building, noting that it gave people inside the structure warning so they could get out.

The fighting has forced the Israeli-Palestinian conflict onto Biden’s radar, despite his apparent to focus on more pressing challenges such as the coronavirus pandemic and China’s rise.

He and his team have devoted relatively little time and staffing to the Israeli-Palestinian issue. The administration, and many other observers, for that matter, also concluded that neither the Israelis nor the Palestinians have the political will to engage in serious negotiations.

Still, over the past week, U.S. officials at all levels have privately and publicly been in touch with Israeli and Palestinian officials as well as other governments in the region with sway. Deputy Assistant Secretary of State Hady Amr is in the region talking to key players. The United States doesn’t engage Hamas, which it labels as a terrorist organization, so it relies on Egyptian and other officials as intermediaries.

Efforts by an Egyptian delegation to broker a ceasefire have failed, with media reports saying Israel, not Hamas, is the party holding out. Analysts say Israel likely views this conflagration as a critical opportunity to serious degrade Hamas’ capabilities, and it wants to drag out the conflict to do so.

Publicly, the Biden administration has not demanded that the two sides agree to a cease-fire. Instead, in statements at the United Nations and elsewhere, U.S. officials are saying America stands ready to offer its support if the two parties want a cease-fire. Privately, U.S. officials are telling both sides that they’d like to see the fighting end soon, but they are not applying any serious pressure, a person familiar with the situation said.

In a call Monday with Israeli Prime Minister Benjamin Netanyahu, Biden “expressed his support for a ceasefire and discussed U.S. engagement with Egypt and other partners towards that end,” according to a White House readout. But that fell short of insisting both sides cease their hostilities.

White House and State Department spokespersons largely sidestepped questions from POLITICO about the use of the word “calm.” When pressed on why the administration isn’t calling for a cease-fire, White House press secretary Jen Psaki defended the administration’s “quiet” diplomacy, saying that, regardless, “every statement we make is with the objective of reducing the violence and bringing an end to the conflict on the ground.”

The administration’s unwillingness to call for a cease-fire has put it at odds with a growing number of lawmakers in its own party, where once solid support for Israel has cracked. Around 30 Senate Democrats alone have joined a call for a cease-fire so far, many of them from the progressive wing of their party.

Biden and his aides may have multiple reasons for not publicly demanding a cease-fire, analysts and former officials say. They could, for one, be trying to score points with Israel, whose support — or at least silence — they’d like to have as they try to revive a nuclear deal with Iran. They could be worried about political backlash among moderate Democrats if they appear not supportive enough of Israel.

It’s also possible that Biden is open to Israeli insistence that they need more time to destroy more of Hamas’ assets in Gaza. The president has resisted growing calls to condition the roughly $3.8 billion in annual U.S. military aid to Israel on how the country treats the Palestinians.

Biden is “extremely old school about this,” said Khaled Elgindy, director of the Program on Palestine and Palestinian-Israeli Affairs at the Middle East Institute, pointing to Biden’s decades-old warm ties with Israeli leaders. “He is extremely out of touch with not only the realities on the ground of the conflict and the issues but even with where the center of gravity is in his own party.”

Michael Singh, a former George W. Bush administration now with the Washington Institute for Near East Policy, said Biden may sympathize with Israel’s goal of degrading Hamas. He noted, however, that every few years, Israel engages in a violent showdown with the Palestinian militant group.

“Generally, part of U.S. policy has been to help Israel pursue its objectives as quickly and with as few civilian casualties as possible,” Singh said. “The big question is, ‘Can Israel do this in a way that’s sustainable?’ The answer so far is no. This is something they’ve had to do repeatedly.”

The secretary of State on Monday went beyond the Biden administration’s standard messaging so far when, during a visit to Denmark, he raised the prospect of a two-state solution.

“We’ll continue to conduct intensive diplomacy to bring this current cycle of violence to an end,” Blinken said. “Then we will immediately resume the work, the vital work of making real the vision of Israel and a Palestinian state existing peacefully, side by side, with people from all communities able to live in dignity.”

A State Department spokesperson did not immediately respond to whether this meant that the Biden administration would launch a formal effort to revive the moribund peace talks between the two sides. Unlike recent administrations, Biden has not even named a special envoy to focus on the long-running conflict.

Neither side is politically well-positioned at the moment to engage.

Israel just held its fourth election in two years, but no ruling coalition has emerged and there’s talk of having a fifth election. The Palestinians were about to hold their first elections in 15 years, but Palestinian Authority President Mahmoud Abbas cancelled them. Abbas blamed Israel, saying it wouldn’t guarantee that Palestinians in places like east Jerusalem could vote. Critics say Abbas was worried his faction would lose to candidates linked to Hamas.

The latest fighting, meanwhile, is likely to only deepen the mistrust.

“Honestly, every Israeli and Palestinian I talk to tells us not to use the word ‘peace,’” said Ilan Goldenberg, a former Obama administration official close to many in the Biden camp. “They tell us nobody in both societies thinks that is possible right now.”

Elgindy agreed that the time isn’t ripe for peace talks. But he also said that the Biden administration’s call for “calm” is frustrating because Israelis can have far more calm in their lives than Palestinians.

“For the most part, Israelis lived normal lives” before the latest fighting, he said. “The airport is open, they go to the beach. What normal are the Palestinians going back to? They’re going back to a crushing blockade and home evictions.”

Otherwise? “You’re just teeing up the next explosion.”