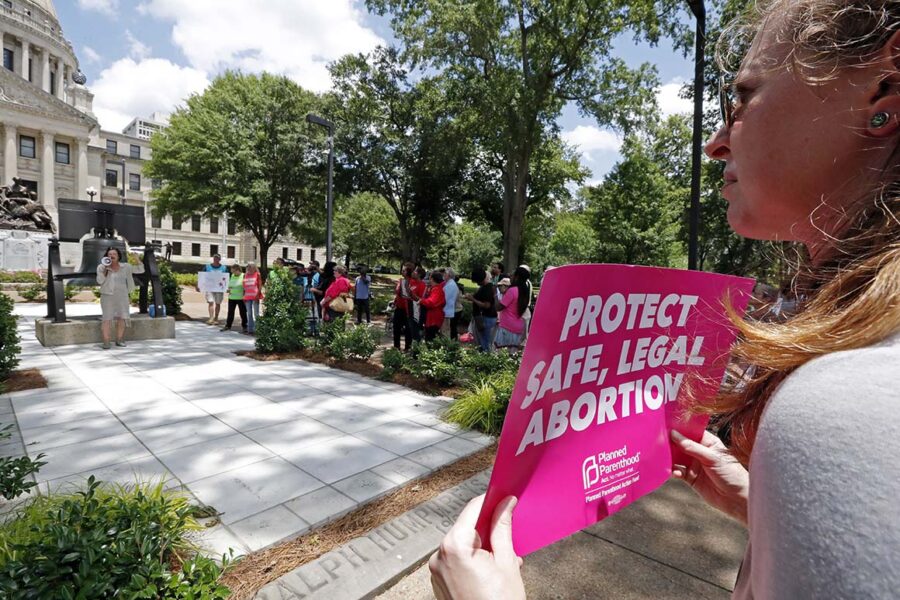 The Supreme Court’s Monday decision to reconsider the right to an abortion drags President Joe Biden into an incendiary political fight that will loom large heading into the mid-term election.

As a presidential candidate, Biden largely stayed quiet on the issue while Elizabeth Warren, Kamala Harris and other Democratic contenders took the lead in putting forward sweeping abortion rights policy platforms. He conceded when pressed, however, that the landmark Roe v. Wade decision that legalized abortion nationwide should be written into federal law and the longtime ban on federal funding for abortion should be abolished.

But by placing the issue front and center, the high court immediately forces his administration to reconsider its measured strategy that’s largely consisted of rolling back Trump-era policies on reproductive rights and appointing some vocal abortion rights supporters to key federal health jobs.

Pressed Monday about how the administration will respond to the court’s taking up Mississippi’s ban on abortion after 15 weeks of pregnancy, White House press secretary Jen Psaki told reporters that the administration is “committed to codifying” Roe but declined to say how such legislation could get through an almost evenly divided Congress.

Psaki’s response is in line with the administration’s general reticence on the subject. In his first 100 days in office, Biden rolled back restrictions on abortion pills, reversed restrictions on funding Planned Parenthood and overseas groups that provide abortion referrals and removed hurdles to medical research that uses fetal tissue obtained from abortions.

But progressive members of Congress and outside groups say they have been struck by Biden’s own silence on the issue: Since taking office, he hasn’t mentioned abortion in any speeches, videos or social media posts. Now, they’re calling on Biden to speak up — and lay out how he will safeguard abortion access when it’s facing challenges before the Supreme Court and red states that are pushing a new wave of restrictions.

“It’s important for the administration to be specific,” Samuel Lau, a spokesperson for Planned Parenthood, told POLITICO. “It’s incumbent on them to use the bully pulpit to shine a light on these attacks and show they’re standing up for access to sexual and reproductive health care including abortion.”

Advocates are hoping that includes Biden following through on his campaign vow to champion federal bills that would enshrine Roe’s protections in federal law and directing the Justice Department to submit an amicus brief in the Mississippi case urging the Supreme Court to uphold the long-standing precedent protecting access to the procedure.

The White House declined to say what steps the administration will take to defend abortion rights.

The abortion fight even hangs over Biden’s forthcoming fiscal 2022 budget. Progressive advocacy groups are pressing Biden to get rid of the long-standing ban on federal funding for abortion, stressing that the right to an abortion is “meaningless” for many low-income people around the country who are barred from using Medicaid to pay for the procedure.

“Saying you want to codify or save Roe isn’t sufficient,” said Destiny Lopez, co-president of All* Above All. “We need from Biden a full-throated plan and a vision for abortion access in this country. He needs to figure out what he can do administratively and figure out what pressure he can put on Congress.”

The Supreme Court won’t hear the Mississippi case until the fall, and any decision likely would not come down until the following spring or summer during the run-up to the 2022 midterms.

Legal experts and advocates on both sides of the issue expect the justices to chip away at — if not completely overturn — Roe, noting that the court could have simply turned away the Mississippi case and the central question of whether states can ban abortion early in pregnancy if it wanted to let precedent stand.

“The Biden administration could take a wait-and-see approach, but there’s going to be a lot more demands put on them to act,” said Mary Ziegler, a professor at Florida State University Law School who specializes in abortion law. She said the court’s taking of the case will likely accelerate conversations about expanding the Supreme Court or at least put pressure on some older liberal judges in the federal court system to retire and make way for like-minded, younger jurists.

Conservative groups say they plan to make abortion and control of the Supreme Court a key focus of their bids to flip the House and Senate next year, hoping to fan religious voters’ anger at the Biden administration’s rollbacks of Trump-era abortion policies and rally support around the Mississippi case, which advocates like Kristan Hawkins with Students for Life of America called a “historic opportunity to right a terrible wrong.”

The court’s decision to take the Mississippi case could also revive interest in a proposal Harris pushed on the campaign trail to create a Voting Rights Act-style preclearance system for abortion — requiring states to seek Justice Department approval before changing laws around the procedure. Such a proposal would face long odds in the 50-50 Senate, where several moderate Democrats like West Virginia Democrat Joe Manchin have shown a willingness to scuttle high-profile administration priorities.

Rep. Judy Chu (D-Calif.), who is a vocal member of Congress’ Pro-Choice Caucus, told POLITICO she’ll push colleagues to back her legislation banning states from enacting abortion curbs that have no medical justification, warning that the Supreme Court’s upcoming ruling could potentially give states a green light to implement such bans en masse.

“We can’t let an attack on Roe open the floodgates to a barrage of anti-choice laws that smother the opportunities of women,” said Chu, who plans to reintroduce her measure in the coming weeks.

But any of those steps — from packing the Supreme Court to passing sweeping legislation codifying Roe — would require abolishing the Senate filibuster, a move abortion rights groups have been hesistant to champion out of fear the tactic could boomerang and allow Republicans to pass federal bans on the procedure should they retake control of the chamber.

Should the court side with Mississippi and give states the right to ban abortion prior to the point of fetal viability, the procedure would immediately become illegal in nearly half of the states. That’s largely because of so-called “trigger bans” that would outlaw the procedure immediately if Roe is invalidated.

While the U.S. is already a patchwork of abortion access, where the ability of a person to terminate a pregnancy varies by ZIP code, the expected outcome of the Mississippi case would deepen those disparities — particularly for those who lack the means to travel across state lines.

“The Biden administration seems to have concluded, up until now, that there was no reason for them to say anything about abortion,” Ziegler said. “Until now, it was something easier for him to finesse and sidestep. But when the Supreme Court puts it front and center, he can no longer do that.”