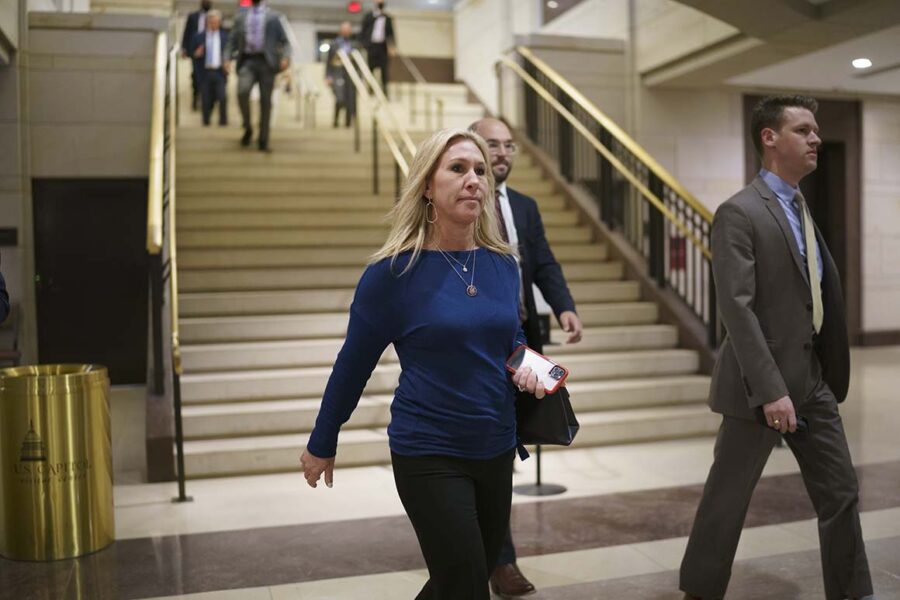 A group of House Republicans revolted over their chamber’s mask rules on Tuesday, the latest sign of tensions boiling over as Congress wrestles with how and when to return to pre-pandemic routines.

Around a dozen Republicans refused to wear masks during the evening vote series and strategically stood at the well of the chamber, which appears on the C-SPAN cameras, and seemed to encourage other members to join in.

Lawmakers face hefty fines if they don’t wear masks on the House floor: $500 for the first offense and $2,500 for the second offense. The money is deducted from their salaries.

Rep. Marjorie Taylor Greene (R-Ga.) snapped a selfie with a few other maskless members and posted it to social media. Taking pictures on the House floor is against longstanding rules due to security concerns.

At one point, Rep. Robin Kelly (D-Ill.) came over and confronted the rebellious crew and asked them to be more respectful of other members and staff.

Rep. Thomas Massie (R-Ky.), who was standing nearby, could also be heard shouting to another member in jest: I can’t “hear” you with your mask on. Massie was one of the lawmakers who helped organize the protest, sources said.

Earlier in the day, Rep. Brian Mast of Florida stood up during a GOP conference meeting and told his colleagues that he’s “done” wearing masks and will refuse to wear them on the House floor going forward, even if it means being fined, according to multiple sources in the room.

Rep. Jaime Raskin (D-Md.) also addressed the GOP group. “I said, ‘if Donald Trump had come out from the beginning and said this is called a patriot mask, and everybody must wear one, otherwise you’re on the side of the enemies of the Republican Party, would they all be wearing masks?'” Raskin said, recounting his conversation later to reporters.

Other members who ended up joining the maskless protest include Reps. Lauren Boebert of Colorado, Chip Roy of Texas, Ralph Norman of South Carolina, Beth Van Duyne of Texas, Louie Gohmert of Texas and Mary Miller of Illinois.

Mast, who has been vaccinated, confirmed his closed-door comments to POLITICO and added that other Republicans have said they will follow suit, teeing up a showdown with Speaker Nancy Pelosi and Democratic leadership.

Meanwhile, House Minority Leader Kevin McCarthy informed the conference he plans to introduce a privileged motion on the topic Wednesday, though language is still being worked out, sources said.

And Rep. Bruce Westerman of Arkansas and top House Republicans — including McCarthy and committee ranking members — pressed Pelosi in a new letter on Tuesday to ease proxy voting measures and to lift mask mandates in light of the new CDC guidelines released last week, which loosened rules for vaccinated individuals.

“It is time we follow the science, lead by example, and fully return to work to serve the American people,” the letter states.

Tensions are near a boiling point between the two parties over pandemic-era protocols, which have been a point of contention for more than a year. Republicans are furious that mask mandates are still in place for both the House floor and committee meeting spaces, despite CDC guidance. Pelosi has also extended proxy voting until July, which has been another source of frustration in the GOP.

Meanwhile, across the Capitol, there are no requirements for members to wear masks on the Senate floor.

“None of us want to be fined, but if we’re vaccinated and CDC guidance says resume normal behavior then let’s do it,” Mast said.

But Pelosi and Democrats have said lawmakers could resume normal life more quickly if more of their Republican colleagues got vaccinated. Democrats say they feel uncomfortable being in closed-door settings without facial coverings until they know more GOP lawmakers have gotten the shot.

Roughly 75 percent of the House has been vaccinated, according to estimates from the Capitol physician that McCarthy has cited. All 219 Democrats reported to CNN that they’re vaccinated, but only 95 out of 212 Republicans reported being vaccinated, while 112 did not respond to the survey.

“CDC guidelines are also very clear that the workplace can decide [their rules] based on their own unique conditions. I think we can acknowledge that the House floor is a very unique condition,” Rep. Pete Aguilar of California, vice chair of the Democratic caucus, said at a press conference. “Until we receive further guidance from the office of attending physician, we will be required to wear masks.”

There have been signs that the Capitol is slowly creaking back to life: Votes are now 30 minutes rather than 45 minutes, and Democrats are expecting to resume their in-person caucus meetings after the recess, Democratic Caucus Chair Hakeem Jeffries of New York announced Tuesday. House GOP meetings have already taken place in the Capitol, with mask and social distancing requirements in place.

But the pace is not fast enough to satisfy Republicans, who have been urging their Democratic colleagues to open up the Capitol and set a better example for the public. Now, after Democrats hammered them all last year for not following the science on Covid-19, Republicans are the ones accusing their colleagues across the aisle of flouting scientific guidelines.

The heated debate over masks has also been playing out at the committee level. Rep. Mark Green (R-Tenn.), a military doctor who has done vaccine research, raised a parliamentary inquiry about masks during a House Foreign Affairs Committee meeting on Tuesday.

Green took issue with updated guidance from the Capitol physician, who initially issued advice last week that seemed to suggest masks would no longer be required for committee hearings and meetings. But then on Monday evening, the physician issued revised guidance to clarify that face coverings are indeed still required in such settings.

“Will this committee base its decision on the wearing of the mask in the committee on the science, or on the policy being pushed from the leadership of the House?” Green asked.

Meanwhile, Rep. Cathy McMorris Rodgers of Washington, the top Republican on the House Energy and Commerce Committee, told POLITICO she has been pushing Chair Frank Pallone (D-N.J.) to fully resume in-person committee hearings, noting the Senate has started to do so. Pallone told her he was planning to review the situation last week, but he’s made no changes yet.

“Virtual hearings are taking a toll on this committee’s important work and further breaking down our effectiveness,” McMorris Rodgers said at a hearing Tuesday. “Please, let’s come together and reopen E&C to legislate and plow the hard ground to get things done on behalf of the people who we have the honor to represent in the People’s House.”

Sarah Ferris and Nicholas Wu contributed to this report.