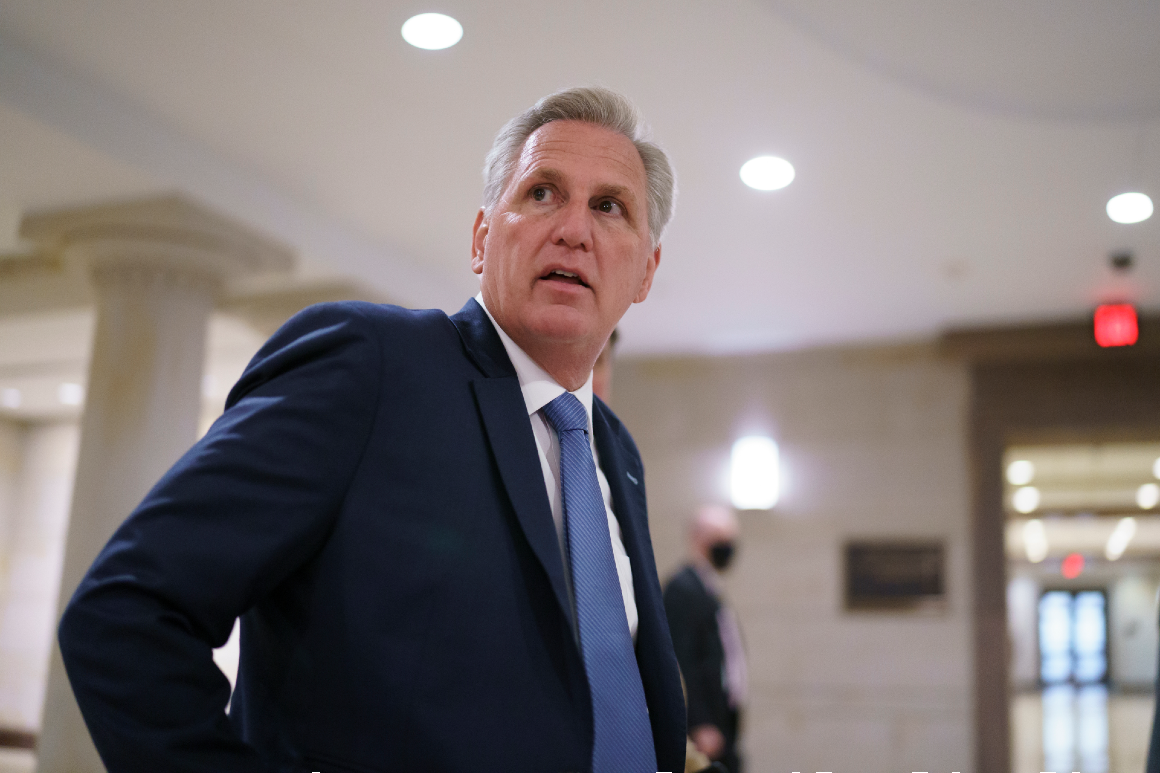 Kevin McCarthy thought his House Republican conference would almost entirely stand behind him in efforts to derail an investigation into the events of Jan. 6.

Now, a last-minute surge of GOP interest is dashing hopes for near-perfect opposition to the independent commission and putting Republican divisions back on full display.

Dozens of Republicans are privately considering voting for the Jan. 6 commission — which McCarthy himself said he opposed earlier Tuesday, even after he deputized one of his allies, Rep. John Katko of New York, to strike a bipartisan agreement on the proposal. In a sign of momentum, the bipartisan House Problem Solvers Caucus, of which Katko is a member, formally voted to endorse the legislation Tuesday evening.

Just days after GOP leaders decided they wouldn’t force their members’ hands either way, McCarthy and his leadership team issued an informal “leadership recommendation” ahead of the Wednesday vote, urging a “no” vote to help contain defections in their party. Former President Donald Trump also sought to shut down the commission on the eve of the floor vote, calling it a “Democrat trap” and urging Republicans to get “much tougher and much smarter.”

“This discussion should be ended immediately,” he said in a statement, which could help push wavering GOP lawmakers into the “no” camp.

Regardless of how many Republicans buck Trump on this issue, though, the bill is expected to pass the House. It’s fate in the 50-50 Senate is less clear.

While House GOP leadership is still not formally whipping against the legislation, their last-minute maneuvering is the latest signal that top Republicans are starting to grow nervous about how many members may end up crossing party lines, which would be a blow to McCarthy and could enrage Trump.

A big bipartisan vote in the House could also put more pressure on Senate Republicans to get behind the proposal.

As one GOP lawmaker put it: “The genie is out of the bottle, and people are trying to put it back in.”

Rep. Peter Meijer (R-Mich.), who plans to vote in favor of establishing a commission, shrugged off McCarthy’s decision, saying, “everyone’s entitled to their opinions.”

McCarthy’s mixed signals are likely a product of his efforts to appease the various factions in his party, particularly the right flank. But the GOP leader has upset several members, who feel McCarthy hung Katko out to dry and now feel even more inclined to rally around Katko and his commission proposal.

Asked about McCarthy’s decision to oppose the commission, Rep. Fred Upton of Michigan said he was “disappointed,” though he declined to elaborate further.

Even Republicans like Rep. Jeff Van Drew (R-N.J.), who seemed sympathetic to McCarthy’s perspective, said they still wanted a commission. Republicans, including some who voted to challenge the certification of the election results, increasingly view the commission as a way to provide themselves political cover — especially with Democrats promising to use the vote as cudgel in the 2022 midterms.

“I do want to have the commission.” Van Drew said. “I just think we should be all inclusive. And that should have been part of the bill.”

McCarthy is navigating a slew of political landmines on the Jan. 6 commission, including how to appease members of the ultra-conservative House Freedom Caucus without upsetting the balance within his conference. McCarthy needs their support if he wants to be speaker; and to keep them happy, he also needs the support of Trump, who does not want an investigative body examining his actions on that fateful day.

On Monday, the House Freedom Caucus relayed to McCarthy that they opposed the commission — news which McCarthy receptively received, according to sources familiar with the matter. Some members of the ultra-conservative group leaned more into the idea that the GOP leader should’ve been whipping against the commission from the beginning.

McCarthy formally opposed the commission on Tuesday, raising some eyebrows in the GOP conference after Democrats conceded to McCarthy on nearly all of his top demands on the commission — something rank-and-file Republicans believe surprised the GOP minority leader.

“Given the political misdirections that have marred this process, given the now duplicative and potentially counterproductive nature of this effort, and given the Speaker’s shortsighted scope that does not examine interrelated forms of political violence in America, I cannot support this legislation,” McCarthy said in a statement opposing the commission.

Others pointed to how there must’ve been a disconnect and wonder what permissions McCarthy gave Katko. Katko could have gotten over his skis in terms of making the agreement or McCarthy could have moved the goalposts on his dealbroker.

The differences in opinion between McCarthy and Katko were on full display in the GOP conference meeting on Tuesday as both outlined their positions on the commission, though the two publicly projected an image that there weren’t hurt feelings on either side.

McCarthy suggested that there are no hard feelings between the two men, telling POLITICO: “Katko has worked hard to improve the bill, it’s just not there yet.”

Katko said he “appreciates” how McCarthy has handled the situation but also predicted a “healthy” number of Republicans would still back the proposal.

Katko — the top Republican on the House Homeland Security Committee — defended the bill he negotiated with the committee’s chair, Rep. Bennie Thompson (D-Miss.), as “a solid, fair agreement that is a dramatic improvement over previous proposals that sought to politicize a security review of the Capitol.” Katko acknowledged “differing views” on the scope of that review, however.

McCarthy reiterated that his chief concern is the scope of the panel — not the broad subpoena power.

“I don’t care about the subpoenas,” McCarthy told POLITICO.

Senate Republicans too have expressed increasing skepticism about the legislation and its narrower scope, though Senate Minority Leader Mitch McConnell struck a different tone than McCarthy.

The Kentucky Republican was noncommittal Tuesday on the commission and said Senate Republicans were “undecided on the way forward” and were going to “listen to the arguments” on whether a commission was needed.

Senate Majority Leader Chuck Schumer on Tuesday vowed to put it up for a vote, though it would need 10 GOP votes to pass.

“Republicans can let their constituents know, are they on the side of truth? Or do they want to cover up for the insurrectionists and for Donald Trump?” he said.

The Jan. 6 commission had already been a point of friction between McCarthy and Rep. Liz Cheney (R-Wyo.), just before she was ousted from GOP leadership. McCarthy had demanded that such a panel examine acts of looting and violence that accompanied some protests last summer against police brutality and racial injustice. Cheney, however, sought to have the commission solely probe the Capitol siege.

Democrats have said that the Jan. 6 commission — if established — should force testimony from McCarthy, who reportedly had a heated phone call with Trump as the insurrection was unfolding and may be able to speak to the former president’s state of mind amid the attack.

Top Democrats hammered McCarthy over his opposition to the bipartisan deal.

Democrats and even some Republicans have suggested that GOP lawmakers are apprehensive about the commission because they’re worried it will be weaponized against Trump and the GOP.

“I sense resistance on it,” said Rep. Don Bacon (R-Neb.), who supports the commission. “But we shouldn’t have any hesitancy to put a spotlight on [Jan. 6], because we don’t want that to ever happen again. … We shouldn’t feel defensive.”