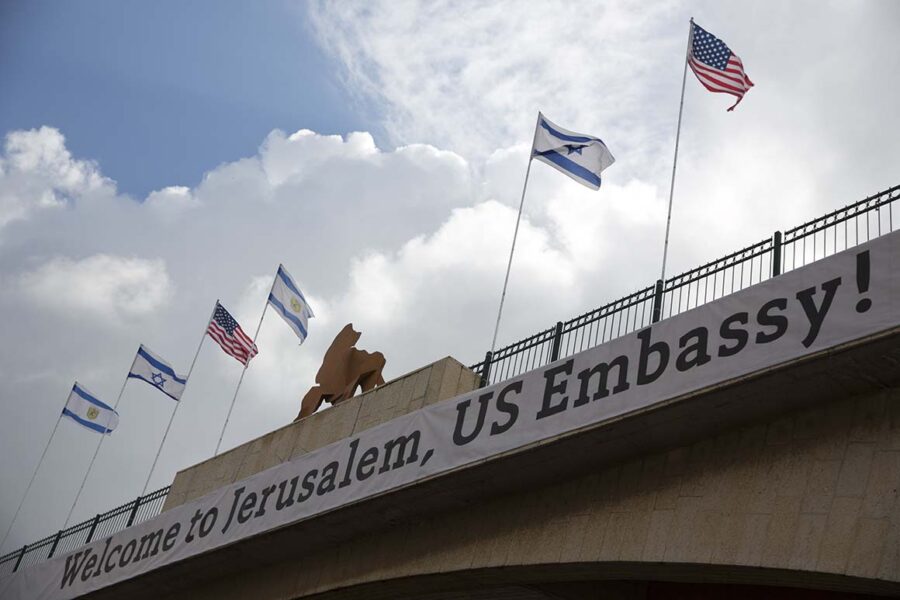 As fresh fighting in the Israeli-Palestinian conflict claims more lives, President Joe Biden is missing a key player who could help calm the volatile situation: a U.S. ambassador in Jerusalem.

An unusual public lobbying campaign over two names in particular is drawing controversy. Following reports that Biden plans to nominate Tom Nides, a banker and former State Department official, some lawmakers and activists are pushing back. They are urging Biden to instead choose Robert Wexler, an ex-lawmaker who’s spent years to trying to end the decades-old conflict.

The pro-Wexler campaign has been waged in private letters to the White House, articles in the Jewish and Israeli press, direct lawmaker conversations with senior Biden aides and the occasional tweet, people familiar with the situation said. Nides has his boosters, too, but at the moment the pro-Wexler crowd is much more vocal.

It’s unusual to see an open fight like this over an ambassadorship, and it underscores how much the Israeli-Palestinian issue still resonates in Washington, even as the politics around it are changing.

Rep. Ted Deutch, chair of a House subcommittee on the Middle East, is among those backing Wexler, who once held his Florida House seat.

“Especially in light of the ongoing terrorist attacks on Israel, we need someone in Jerusalem who has shown his commitment to the relationship, understands the intricacies of these issues, and has earned the respect of leaders across the spectrum. Robert would be a natural fit,” Deutch, a staunch supporter of the U.S.-Israel relationship, said in a statement.

Also rooting for Wexler is Sen. Bernie Sanders, a Vermont independent and progressive favorite who lost the 2020 Democratic presidential nomination to Biden.

In what his office said was a pro-Wexler message, Sanders recently tweeted: “As President Biden considers his choice for Ambassador to Israel, I encourage him to choose someone who can represent our country in an even-handed way, and who can engage not only with Israel but with the Palestinians as well.”

“I’m very excited that he is being considered apparently as the frontrunner for ambassador to Israel,” Lieberman told the Forward, a Jewish-focused news outlet. “He will be as loyal to President Biden as he was to me and the 2000 campaign. He will have Israel’s security and well-being at heart.”

Biden is expected to unveil several ambassadorial nominees later this month. The Israel post was expected to be among them, but that was before the latest clashes between the Israeli government and Palestinian militants in the Gaza Strip, and it’s not clear if an announcement will be delayed.

A spokesperson for the White House declined to comment on the dust-up over the ambassador post in Israel but said that in general, “We’re not commenting on anyone, and no one is final until they’re announced.”

A spokesperson for the Israeli Embassy in Washington did not respond to requests for comment.

The U.S. ambassadorship in Israel is one of America’s most high-profile diplomatic roles. It’s an exceptionally challenging position, not just because of the complexity of the Israeli-Palestinian conflict but also because of the sensitive U.S. domestic politics involved.

Those politics are increasingly unpredictable. For decades, Israel has counted on solid, widespread bipartisan support in Congress. Now, a growing number of progressive Democrats are speaking out in favor of Palestinian rights and questioning America’s hefty military aid to Israel.

The American ambassadorship in Israel has frequently been given to a career U.S. diplomat, a sign of the complexity of the portfolio. There have been some political appointees named to the role, though generally they have had expertise on the Mideast conflict.

President Donald Trump’s ambassador to Israel, David Friedman, wasn’t a traditional expert on the issue per se. He was a bankruptcy lawyer, but he had numerous contacts in Israel, especially on the right side of the political spectrum, and he was a promoter of the Israeli settler movement.

Friedman was profoundly influential in crafting Trump’s policy toward the region, which was heavily weighted in favor of Israel, not the Palestinians.

Prior to Friedman, Obama appointee Dan Shapiro held the role. Shapiro was a political appointee, not a career diplomat. However, he had extensive knowledge of the conflict, having served as a Middle East hand on the National Security Council, among other government roles.

Nides’s resume includes serving as deputy secretary of State for management and resources. That job involved ensuring that policy decisions — including on issues related to the Middle East — received proper financial and administrative resources. Nides also held top private sector positions, including at Morgan Stanley, where he is now vice chair. Nides was a fundraiser for Biden’s presidential campaign, raising at least $100,000 for him.

Wexler left Congress in 2010 to lead the S. Daniel Abraham Center for Middle East Peace in Washington, D.C. He advised Barack Obama on Middle East issues during his presidential campaign, and he has ties to an array of Israelis and Palestinians, as well as the American Jewish community. Wexler also is affiliated with Ballard Partners, a lobbying and PR firm; he’s listed as co-managing partner of its Tel Aviv office, but he has not been registered as a lobbyist in recent years, people who know him say.

Many of the people who agreed to speak for this story requested anonymity because of the sensitivity of the issue. Some are active in Democratic politics and want to maintain good relations with whomever is chosen for the Jerusalem post.

Wexler backers didn’t express personal animosity against Nides, but they argued that Wexler was simply more qualified for the job. They admit to being puzzled as to why Nides wasn’t being considered for some other ambassadorial post that typically goes to a political appointee. Some expressed frustration over the idea that the Israel post could now be lumped in with places like Paris or London, which are often prizes for wealthy campaign donors.

Prior to the recent violence, Biden had signaled he did not intend to make the Israeli-Palestinian conflict a primary foreign policy focus. In that case, Wexler backers said, a Nides appointment would make sense. But now?

“Amid the current crisis, it’s clear that the administration doesn’t really have the choice of disengagement, and they know that,” one Wexler supporter said.

Nides supporters, however, said he is more knowledgeable about the Israeli-Palestinian conflict than many may realize and that he cares deeply about the issue. In any case, he’s a quick learner whose fluency in both the private and public sectors could be an asset to the U.S.-Israel relationship.

Furthermore, Nides has close ties to people in the White House, including those in the National Security Council, and that could prove handy in a crisis, they said. Some also noted that if area expertise was the driving factor in Biden’s choice, he could have picked a career diplomat.

“Does he know [the file] as well as Dan Shapiro? No. But that’s a very high bar,” one Nides backer said. “But he knows it well enough to be an effective ambassador.”

Activists and others who tackle Israeli-Palestinian issues say that, above all, they are frustrated that Biden is taking so long to make a choice.

The latest violence in the region, which exploded just over a week ago, has killed more than 200 people, most of them Palestinians in the Gaza Strip. Having a U.S. ambassador on the ground could have helped lower tensions, some said.

“This decision should have been made a couple of months ago and just done,” one pro-Israel lobbyist who backs Wexler said. “They should have appointed this ambassador early on.”

Anita Kumar contributed to this report.