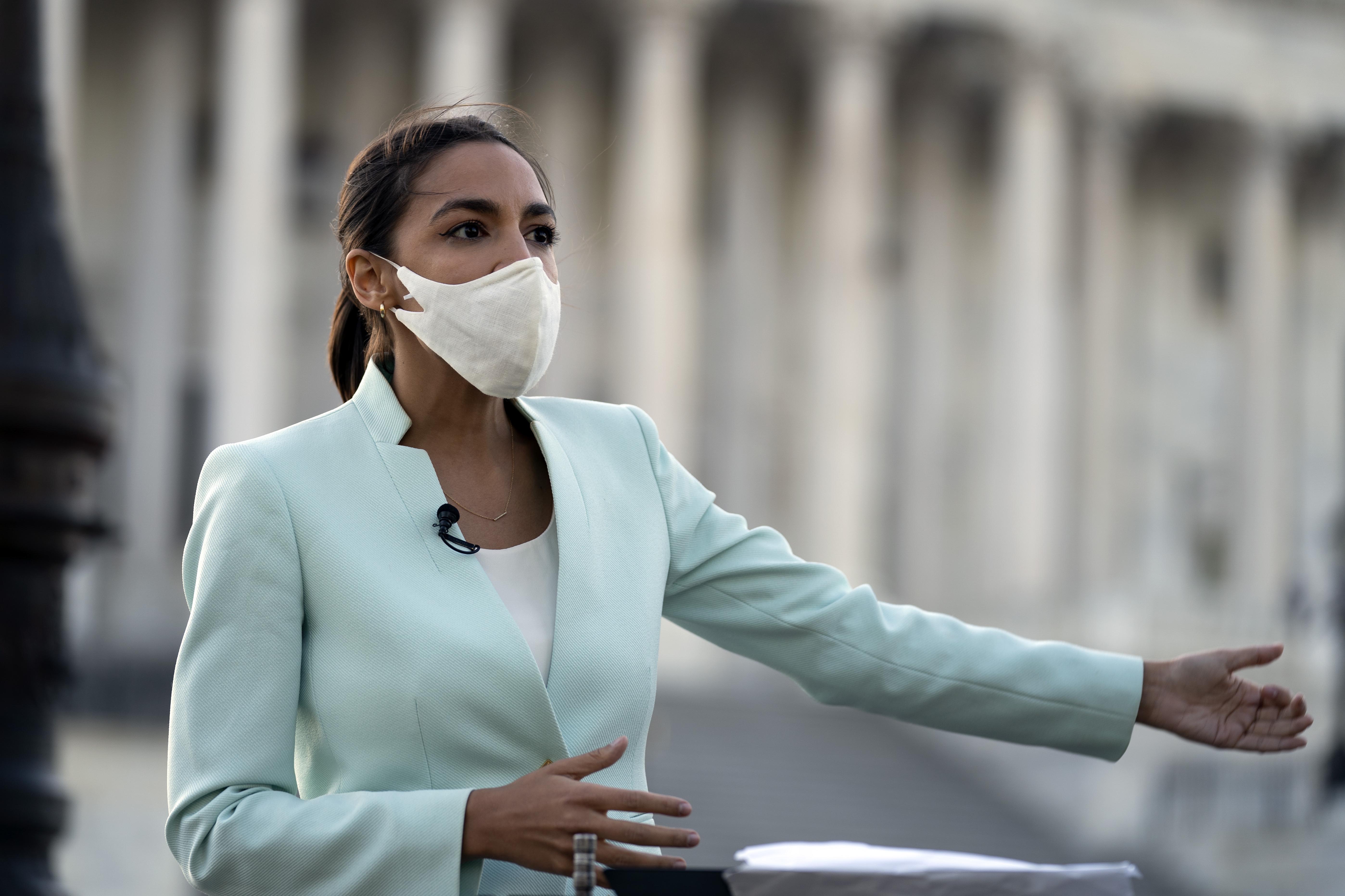 A group of lawmakers is cobbling together an effort to block a sale of precision-guided weapons to Israel as President Joe Biden ratchets up the pressure on Prime Minister Benjamin Netanyahu to bring to a halt the increasingly deadly conflict in Gaza.

Rep. Alexandria Ocasio-Cortez (D-N.Y.) is leading the effort, along with Reps. Rashida Tlaib (D-Mich.), Mark Pocan (D-Wis.), Ilhan Omar (D-Minn.), and others, according to a draft resolution obtained by POLITICO.

It came as partisan jostling on Capitol Hill over U.S.-Israel relations escalated significantly — from predictably sharp rhetoric to lawmakers accusing each other of supporting terrorists as both parties asserted their support for Israel’s right to self-defense.

The resolution of disapproval, as drafted, aims to prohibit the proposed $735 million sale of a Boeing-built arms guidance kit to Israel. The Joint Direct Attack Munitions kit, as it’s known, converts unguided or “dumb” bombs into precision-guided munitions.

The eleventh-hour Democratic effort, which is doomed to fail, comes one day after a group of senior House Democrats on Tuesday backed off an emerging push to delay the sale amid intensifying violence in the region. Lawmakers wanted to use the impending arms transfer as leverage to push the Israelis to drop their resistance to a cease-fire with its longtime nemesis, the Palestinian militant group Hamas.

Their push set the stage for an intense spat on the other side of the Capitol later Wednesday, when Sens. Rick Scott (R-Fla.) and Bernie Sanders (I-Vt.) offered competing resolutions about the U.S. position on the current crisis. Scott’s measure condemned Hamas’ rocket attacks on Israel and expressed support for Netanyahu’s bombing campaign in Gaza, while Sanders’ included provisions pushing for a cease-fire and mourning the loss of both Israeli and Palestinian civilians.

The ensuing debate on the Senate floor laid bare the raw partisan divisions surrounding the U.S. relationship with Israel.

“Today is a sad day for the United States Senate, and one we will not forget,” Scott said, accusing Democrats of “abandoning” Israel in favor of Hamas, which sent thousands of rockets into Israel earlier this month. “We should stop cowering to the radical anti-Israel left.”

Scott’s resolution, which had the support of 29 other GOP senators, was defeated after Sanders objected. The senators went back and forth accusing each other of supporting terrorists.

Caught in the middle is the president, who’s been mostly quiet in public about the ongoing violence in Gaza.

While Biden has largely ignored his party’s demands to push Netanyahu to agree to a cease-fire, the president has also drawn intense criticism from Republicans, who see him as insufficiently supportive of Israel’s right to defend itself against Hamas rocket attacks. The White House has described Biden’s activity thus far as “quiet, intensive diplomacy.”

At a press conference on Wednesday, GOP senators hammered Biden for not being more outspoken in favor of Israel’s military campaign in Gaza — even suggesting that the administration was tacitly supporting Hamas.

Republicans remain united behind Israel and the conservative Netanyahu government, while Democrats squabble over Biden’s handling of the crisis, exposing internal divisions that the GOP chalks up to eagerness to appease progressive lawmakers.

“On so many issues, he’s being pulled to the left,” Sen. Dan Sullivan (R-Alaska) said of Biden in a brief interview.

Earlier Wednesday, Biden told Netanyahu that he “expected a significant de-escalation today on the path to a cease-fire,” according to a White House readout of their phone conversation. Last week, the U.S. blocked efforts by the United Nations Security Council to call for a cease-fire, effectively backing Israel’s bombing campaign against Hamas, the Palestinian militant group.

As of Wednesday, Israel’s military operations in Gaza have killed 217 Palestinians, including 63 children, while 12 Israelis have died in the conflict, which escalated after Hamas launched thousands of rockets into Israel.

The resolution of disapproval isn’t likely to advance through the House or even the Foreign Affairs Committee; the period given to Congress for review of the Israel arms sale in question expires at the end of the week. Although symbolic, the Ocasio-Cortez-led push reflects progressive Democrats’ increasing uneasiness over the lack of conditions on U.S. support for Israel, skepticism that’s only deepened as Israel continues to bombard Gaza with air strikes.

Another supporter of the resolution, Rep. Betty McCollum (D-Minn.), is the chair of the House Appropriations Committee’s defense subpanel.

“Selling American-made weapons to Israel while members of Congress are asking for a ceasefire is completely tone-deaf,” McCollum said in a statement. “Israel needs to end the bombing of Palestinian families in Gaza and the Biden administration must do more to bring a conclusion to this terrible crisis as swiftly as possible.”

Most Democrats, though, have defended the arms sale even as they have pushed Israel to agree to a cease-fire. Senate Armed Services Chair Jack Reed (D-R.I.) noted earlier this week that the Boeing kit is precision-guided and thus intended to reduce civilian casualties as well as collateral damage. Israel is facing international criticism for its strikes against Hamas that have resulted in civilian deaths and injuries.

Lawmakers said Tuesday that the weapons, bought directly from Boeing in a deal that had been in the works for years, would not arrive in Israel for months. Unlike foreign military sales, direct commercial sales do not get posted online, and lawmakers only get a 15-day window for objections. Congress was first notified on May 5.

“We remain deeply concerned about the current violence and are working towards achieving a sustainable calm,” the spokesperson said.

The U.S. has long provided lethal arms, including precision-guided bombs, tanks and sophisticated fighter jets, to Israel. Since 1985, the U.S. government has provided nearly $3 billion in foreign military aid annually for Israel to preserve its military edge over its Arab neighbors.

Washington has also built war reserve stock facilities in Israel to stockpile military equipment, including ammunition, “smart” bombs, missiles and military vehicles. Although intended for use by U.S. forces in the Middle East, the equipment has on rare occasions been transferred to Israel for use during conflicts, including during the 2014 Gaza war.

In recent years, however, the political dynamic surrounding U.S. support for Israel has shifted significantly. While both parties broadly continue to express strong support for Israel’s sovereignty, some progressive Democrats have become more vocal about potentially cutting U.S. military aid to Netanyahu’s conservative government, particularly after he considered annexing part of the West Bank in 2020.

And pro-Palestinian activists were thrilled to see progressives take a more vocal stance against the Democratic establishment’s previously unquestioning support for the Israeli government.

Sarah Ferris and Connor O’Brien contributed to this report.