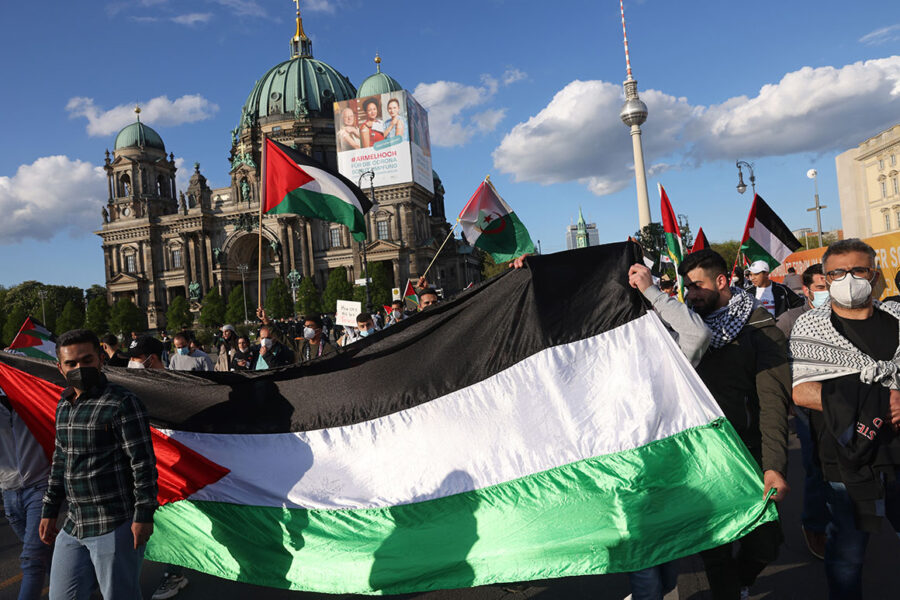 As Biden administration officials sought to end the latest Israeli-Palestinian fighting, they kept two numbers in mind: 2012 and 2014.

The last two major conflagrations between Israel and Hamas militants who control the Gaza Strip took place in those years. The 2012 fighting lasted eight days, killing at least 160 Palestinians and six Israelis. Then-Secretary of State Hillary Clinton played a key role. The 2014 episode is often described as a war; it lasted some 50 days, killing more than 2,200 Palestinians and over 70 Israelis. John Kerry, Clinton’s successor, was deeply involved in trying to broker a resolution.

Aides to President Joe Biden — many of whom have worked with Clinton, Kerry or both — knew they couldn’t stop Israel from retaliating when Hamas began firing rockets at Israeli cities on May 10. They decided instead to try to make sure the fighting was as short and with few casualties as possible — in other words, more like 2012 than 2014. That required applying what they and many analysts believe were the lessons learned.

According to three people familiar with the current situation, that playbook included U.S. officials working primarily behind the scenes on the diplomatic front, especially at the start; blocking moves by the U.N. Security Council, including demands for a ceasefire; and relying on other players in the region, in particular Egypt, to do the heavy lifting on truce negotiations.

The next few days could signal whether the strategy succeeds. On Thursday, the Israeli government and Hamas announced they’d agreed to a cease-fire. The fighting is expected to stop at 2 a.m. Israel time Friday. More than 230 Palestinians and a dozen Israelis have died in the 11 days of clashes. No one expects the truce to last forever, but it’s a start.

“In my conversation with Prime Minister [Benjamin] Netanyahu, I commended him for the decision to bring the current hostilities to a close in less than 11 days,” Biden said early Thursday evening after word of the new cease-fire.

“We’ve held intensive, high-level discussions hour by hour, literally, [with] Egypt, the Palestinian Authority, and other Middle Eastern countries with [the aim] of avoiding the sort of prolonged conflict we’ve seen in previous years when the hostilities have broken out,” said the president.

Engage, but not too much

It is tricky to compare one battle to another, even in a conflict as cyclical and seemingly interminable as the one between Israel and the Palestinians. Each episode of fighting has its own context politically and logistically.

Still, U.S. officials and analysts believed that in this latest clash, there were lessons to apply from 2012 and, especially, 2014.

A key one was to have a proper level of U.S. diplomatic engagement — robust but quiet. The administration decided, from past experience, that putting the U.S. front and center in the middle of the conflagration could inflame tensions and perhaps incentivize one or both sides to dig in and resist U.S. pressure, if only for the sake of political optics. So, Biden aides decided that while the United States wouldn’t be absent, it would operate primarily from a distance and behind the scenes.

That meant dozens of calls from U.S. officials (more than 80 “engagements,” the White House said Thursday), and not just to the Palestinians and Israelis but also regional governments such as Qatar and Egypt. Those two countries have connections with Hamas, which the U.S. designates as a terrorist group and does not directly engage.

Some of the conversations were held in the run up to Monday, May 10, due to concerns about growing tensions between Palestinians and Israelis over access to holy sites, possible evictions of some Palestinian families and the potentially provocative route of a parade by right-wing Israelis. Those frustrations led to clashes that wounded more than 300 Palestinians, prompting Hamas to start firing rockets at Israel, and Israel to retaliate with airstrikes on Gaza.

Many of the U.S. calls, which included officials at all levels, were never publicized. But the administration shared readouts of several calls by National Security Adviser Jake Sullivan and Secretary of State Antony Blinken to Israeli and other officials.

Blinken especially picked up the pace of calls to Middle East leaders as the conflict wore on, even though he spent the last few days visiting Iceland, Denmark and Greenland. Biden himself weighed in, speaking to Israeli Prime Minister Benjamin Netanyahu at least six times, seemingly cranking up the pressure with each call. Two of the calls were held Thursday, a senior administration official confirmed.

The United States did not, however, send a high-profile official to Israel. It dispatched Deputy Assistant Secretary of State Hady Amr, who oversees the Israeli-Palestinian portfolio but whose authority is limited.

It’s unclear exactly why the Biden administration didn’t send someone higher-ranking. It may have been because many positions remain unfilled and because people, like Blinken, were stretched. But the administration also didn’t want to be seen as taking ownership of cease-fire talks, one of the people familiar with the situation said, even though it helped facilitate them.

That was a mistake many U.S. officials and analysts believe was made in 2014, when Kerry found himself trying to wrangle a truce. Multiple cease-fires were struck, only to quickly fall apart, dragging out the fight.

“Kerry thew himself into 2014, and he got into the middle of it in a way that actually prolonged it,” said Dennis Ross, a longtime Middle East hand who is in touch with Biden administration officials. Ross said he fielded complaints from both Israelis and Palestinians about Kerry’s involvement.

One mistake Kerry made, Ross said, was that he relied too much on Qatar, which is close to Hamas and can influence the militant group. The Qataris left Hamas leadership with the impression that they could get more than Israel was actually willing to give in cease-fire talks, and Kerry’s presence also raised Hamas’ expectations.

As a result, another lesson learned was to rely more on the Egyptians to broker the truces, Ross said.

The 2014 conflict badly damaged the already tense relationship between then-President Barack Obama and Netanyahu, who differed, among other things, on the U.S. decision to pursue nuclear talks with Iran, an avowed enemy of Israel.

Obama spoke out several times about the fighting in 2014, and he spoke with Netanyahu at least twice. Like Biden today, he repeatedly stated that Israel has a right to defend itself against Hamas, but as the clashes kept going and civilian casualties mounted, Obama grew more frustrated. At one point he pressed Israel for an “immediate, unconditional humanitarian ceasefire.”

In 2012, Obama spoke with Netanyahu at least twice amid the hostilities. He also dispatched Clinton to the region to help push through a cease-fire. The reason she needed to be there, Ross said, was that Egypt was headed at the time by Mohamed Morsi, a Muslim Brotherhood figure who did not want to personally deal with Israel.

While at first glance it may seem that the shorter 2012 battle was handled well by Clinton and others in the Obama administration, some analysts are less certain that the long-term effects were positive. For one thing, fighting erupted just two years later, raising questions about whether Israel had enough time to adequately defang the militant infrastructure Hamas had built in Gaza.

But when asked if the Biden administration should have sent Blinken to nudge along the ceasefire or fortify talks, Schanzer said: “No, no. Tony should give full support to a trusted third party in the region. Egypt is that.”

With 2012 and 2014 in mind, the Biden administration also opted to block the U.N. Security Council from issuing statements and resolutions related to the conflict, including calls for a ceasefire.

There was a strong belief among U.S. officials that the Israeli government, which has long viewed the United Nations and its various organs as biased against it, would react poorly to pressure from the world body.

The administration realized that it would be accused of not living up to its promises of promoting human rights if it blocked Security Council action, a person familiar with the situation said. But it decided that was worth the risk if the conflict could end faster and with fewer lives lost.

There also was a question of how much the United States itself should insist the two sides agree to a cease-fire.

Behind the scenes in recent days, Washington was pushing more for a truce as the days went on and more people died. Privately, U.S. officials, including the president, were conveying to Israelis that they could only shield the country so much longer on the international stage. The administration felt pressure from Capitol Hill as well, where progressive Democrats were calling for a ceasefire and questioning U.S. military aid to Israel.

Still, in its public statements, the Biden administration was more careful, saying early on that it would help facilitate a cessation of the hostilities should the fighting parties be interested. This week, amid signs that both Hamas and Israel felt like they were prepared to stop the fighting, Biden administration began to be more open about wanting a cease-fire.

Netanyahu reacted to that pressure with a statement suggesting Israel was prepared to fight on for a while, but administration officials by that point were increasingly confident that a ceasefire was within reach.

Analysts said the behind-the-scenes work of prepping for a truce gave both Biden and Netanyahu some room to maneuver politically. Biden could publicly increase the pressure on the Israeli leader as a way to calm down progressive Democrats, while Netanyahu could seem to rebuke Biden in a nod to his many right-wing Israeli supporters.

Focusing on what’s next

Activists have chided the administration for what appeared to be a slow response to the overall crisis, which began with growing tensions well before Hamas fired its rockets on May 10. And there is still nervousness about whether the new ceasefire will hold, and for how long.

Schanzer, of the Foundation for Defense of Democracies, said Israel appeared to have done more damage to Hamas’s assets during these 11 days than it had managed to do during the eight-day battle in 2012.

One question now is whether the Biden administration will make the Israeli-Palestinian conflict more of a priority. Biden took office with no illusions that he would be able to solve the long-running dispute. He has been more focused on other challenges, such as those posed by China’s rise and the coronavirus pandemic.

It’s still unlikely that the administration will try to jump-start broader peace talks between Israelis and Palestinians anytime soon — neither side is particularly enthused about the possibility anyway. But Biden may beef up some of the staffing devoted to the topic.

That could include more quickly nominating an ambassador to Israel and reopening the consulate that deals with the Palestinian Authority, which is based in the West Bank and led by Mahmoud Abbas. Biden’s immediate predecessor as president, Donald Trump, shut down the consulate, one of a slew of moves that have weakened U.S. links to the Palestinians.

Ross noted that Gaza will need reconstruction aid, and that Biden could name someone to oversee the U.S. role in those efforts — one made more complicated by U.S. unwillingness to deal with Hamas.