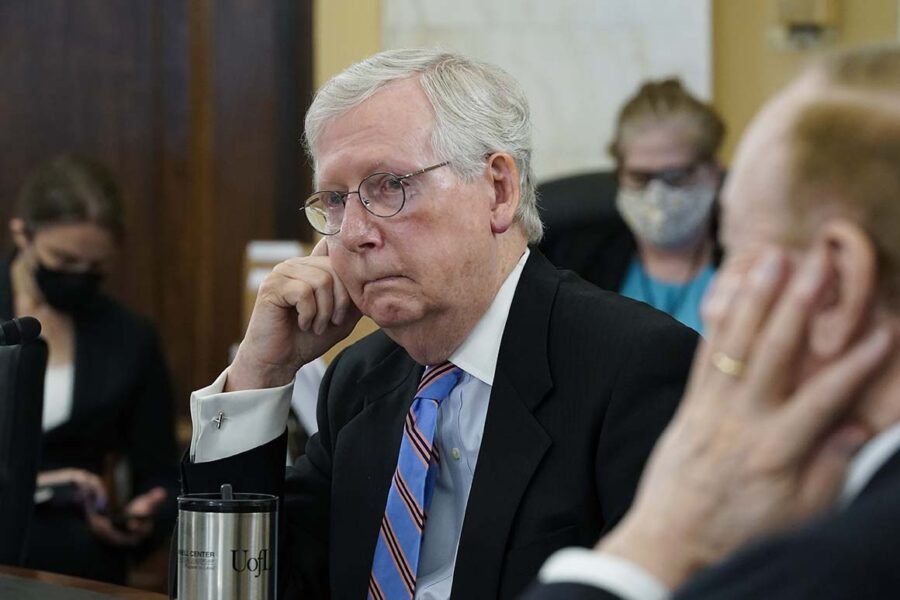 The filibuster has been on hiatus since Joe Biden took over. Senate Republicans are about to change that — over a bipartisan commission to probe the Capitol riot.

After more than four months of letting their power to obstruct lie unused in the Senate, the 50-member Senate GOP is ready to mount a filibuster of House-passed legislation creating an independent cross-aisle panel to investigate the Jan. 6 insurrection. If Republicans follow through and block the bill, they will spark a long-building fight over the filibuster’s very existence.

The filibuster has spent months of lurking in the background of the Senate’s daily business, but the battle over the chamber’s 60-vote threshold will erupt as soon as next week. Senate Majority Leader Chuck Schumer is plotting to bring the House’s Jan. 6 commission bill to the floor and daring Senate Republicans to block it.

And GOP opposition is hardening by the day. According to interviews with more than a half-dozen Republicans on Thursday, there is almost no path to even opening up debate on the bill — much less passing it.

“I don’t think there will be 10 votes on our side for it,” said Sen. Mike Braun (R-Ind). “At this stage, I’d be surprised if you’re gonna get even a handful.”

Senate Minority Leader Mitch McConnell has been circumspect about his use of the filibuster, leaving the tool untouched so far this Congress as his conference has advanced Democratic bills confronting hate crimes, planning water infrastructure and increasing American competitiveness. But the Jan. 6 commission — and talking about former President Donald Trump for months on end — is a bridge too far for the GOP.

Now that McConnell is pushing his conference toward a filibuster of a bipartisan bill, Democrats see an opportunity to begin making their case to reluctant members that the 60-vote status quo is unsustainable.

As an incredulous Sen. Elizabeth Warren (D-Mass.) put it: “How do you go forward if you can’t make it work over something like an independent commission?”

“That’s their problem. They can prove how difficult life is with the filibuster if they’re not careful,” said Senate Majority Whip Dick Durbin. “When the filibuster is actually used, it becomes an exhibit in the case against continuing it.”

Some Republicans, such as Mitt Romney of Utah and Susan Collins of Maine, are still amenable to opening debate on the bill and amending it to ensure the investigation is completed this year and that the commission is staffed in a bipartisan way. But overall, Senate Republicans have rapidly shifted into wholesale opposition to the commission concept this week, reasoning that tanking a commission in May of 2021 is better than setting up Trump headlines well into the midterm year.

“It’s a dicey vote. It’s set up to be anti-Trump, pro-Trump vote, in my view,” said one undecided Republican senator. “As somebody who voted not to impeach, I still am interested in finding out what happened.”

What’s more, Trump has directly linked himself to the vote on the commission. He criticized the 35 House Republicans who supported it and is publicly leaning on the Senate GOP to defeat it. It would not be lost on Democrats that Republicans appear to be using the filibuster to help Trump avoid months of headlines about his actions stoking the Jan. 6 riot.

Democrats didn’t exactly draw it up this way. Just a few days ago, it appeared the Republican Party wanted to make changes to the bipartisan commission, not block it altogether.

The more salient vote for the filibuster’s future might come this summer when Democrats’ voting-rights plans hit the Senate floor. And unlike other Democratic priorities, the bipartisan commission appears to have unanimous party support.

Sen. Joe Manchin (D-W.Va.), one of the filibuster’s strongest supporters in the Democratic Party, seemed aghast that his GOP colleagues are on track to block the bill.

“So disheartening. It makes you really concerned about our country,” Manchin said. Asked if that is an abuse of the filibuster: “I’m still praying we’ve still got 10 good solid patriots within that conference.”

McConnell and Senate Minority Whip John Thune have not begun twisting arms, but leadership has delivered an unmistakable message that the commission needs to be disposed of on the Senate floor when Schumer brings it up. McConnell’s close ally, former Senate Intelligence Chair Richard Burr (R-N.C.), has been making an aggressive case against the bill.

Burr, the most surprising vote for Trump’s conviction at his impeachment trial, said there are no changes that could be made to the legislation to win his support.

“I know how difficult it is. So this myth that you could finish this by December? You probably couldn’t even get your staff security clearance to read the documents,” Burr said. “There’s no question” this would bleed into the midterms.

Burr and Sen. Roy Blunt (R-Mo.) said they expect committee reports on the Jan. 6 pro-Trump riot at the Capitol to come down in June, arguing that would preempt the need for a bipartisan commission with subpoena power. Not all Republicans are sold on their line of thinking.

“I’m not going to worry about the party. I’m going to worry about what’s the right thing for the country and for the Senate. And I support the effort to learn more about the attack on Jan. 6,” Romney said. “Susan Collins made good points in insisting the staff be a bipartisan staff and making it clear that we really do intend to be finished by the end of the year. I will not have this go into an election year.”

Besides Burr, the other six Republicans like Romney that voted to convict Trump are either undecided or supportive. Sen. Bill Cassidy (R-La.) has been most emphatic in his support for the commission.

But it’s hard to find a path to 60 votes without a more general acceptance in the GOP that a commission is needed. Several senators reported that in the GOP caucus room, momentum is building the other way.

Moreover, it’s an open question whether the Senate will wrap up work on Schumer’s American competitiveness legislation before its upcoming recess. That means the commission vote could slip until June, which would fail to capitalize on the current mayhem in the House GOP over Rep. John Katko’s (R-N.Y.) deal with Speaker Nancy Pelosi on the investigative panel.

Blunt said Republicans could make it difficult for Schumer to quickly move onto the Jan. 6 commission if Schumer tries to force a vote next week. He said Schumer’s competitiveness bill “wouldn’t succeed” if he attempted to rush it through to move toward the commission vote.

“If we get to a point where compromise, bipartisanship is not going to work, and it’s just basically delaying what we need to be doing, then we need to face the issue of filibuster,” said Sen. Mazie Hirono (D-Hawaii). “I’d like to see it dealt with now.”

Marianne Levine contributed to this report.