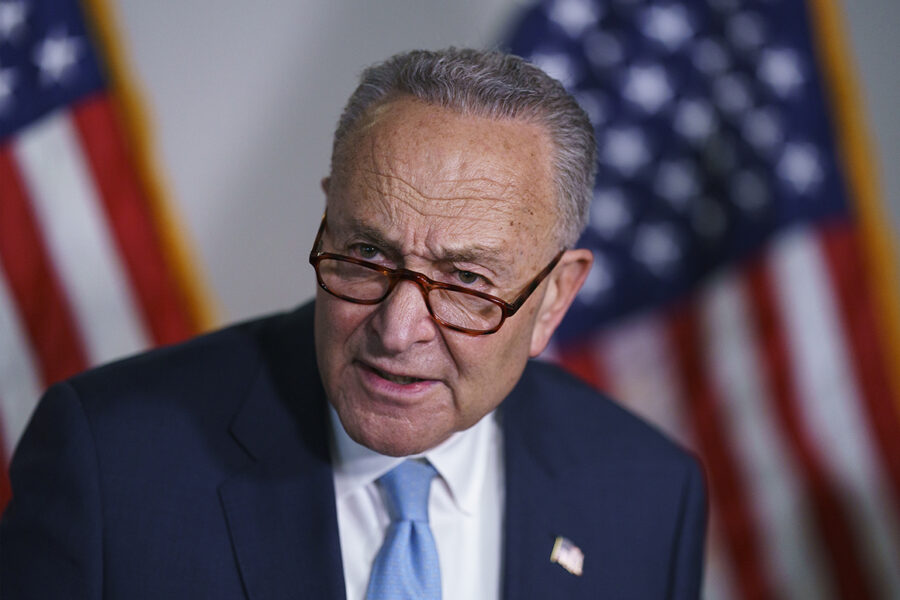 A bipartisan deal struck on Thursday brought the Senate closer to passage of a behemoth bipartisan bill aimed at confronting China’s economic and geopolitical ambitions.

The fate of the legislation, a top priority of Senate Majority Leader Chuck Schumer, grew brighter after a key vote stayed open for more than three hours — then ended in a Republican decision to let the bill move forward. But an ultimate accord appeared within reach after Schumer and Sen. Mike Crapo (R-Idaho) reached an agreement on a bipartisan trade proposal that GOP senators viewed as a dealbreaker.

The China measure could be the final major bipartisan victory the Senate can achieve this year, with several cross-aisle negotiations on other major issues stalling.

The bill, dubbed the U.S. Innovation and Competition Act sets aside billions of dollars in new funding for science and technology grants. Its goal is to counter China’s economic rise and develop a strategy to deal with national security challenges emanating from Beijing.

“Everyone knows the federal government’s commitment to science and technology has been slipping for decades,” Schumer said. “We’ve been complacent at the top of the global heap, and our position as the world’s economic leader is teetering.”

Senators spent three months crafting aspects of the bill in various committees, and Schumer promised a “robust” amendment process before final passage. Indeed, over the past two weeks, Schumer allowed more than a dozen amendments to get roll-call votes on the Senate floor, most of which were authored by Republicans — a significant departure from the chamber’s culture during the Trump administration, when amendment votes were a rarity.

As of Thursday morning, Republicans were still pushing for additional amendment votes, including the Crapo-led effort.

“I told Sen. Schumer, ‘If you want to get cloture on this bill we just need more amendments.’ He said, ‘Well, you’ve had a lot of amendments.’ And I said, ‘Not as many as we want,’” said Sen. John Cornyn (R-Texas), a top ally of Senate Minority Leader Mitch McConnell.

Schumer (D-N.Y.) defended the process, contending that he has already allowed for more amendment votes in his nascent tenure as majority leader than McConnell did during the last four years when the Kentucky Republican held the Senate’s top job.

“Here on the floor, we’ve held the kind of vigorous, bipartisan, open amendment process that senators have been calling for,” Schumer said. “Some of these votes were tough for our side. In the old days, we would have said no. We said yes, we’ll vote for them.”

There has long been broad agreement among senators from both parties that the U.S. should be doing more to blunt China’s global influence and its malign behavior in various sectors, including its theft of intellectual property and its human-rights abuses against Uyghur Muslims in the Xinjiang region of China.

But several Republicans vocally opposed the bill despite the Crapo-Schumer deal, and some blamed their party’s leadership for how the process was handled.

“We did a piss-poor job of negotiating this,” Sen. John Kennedy (R-La.) said. “[Schumer is] so excited. He’s ecstatic. He’s running around like a five-year-old in a Batman costume, he’s so excited.”