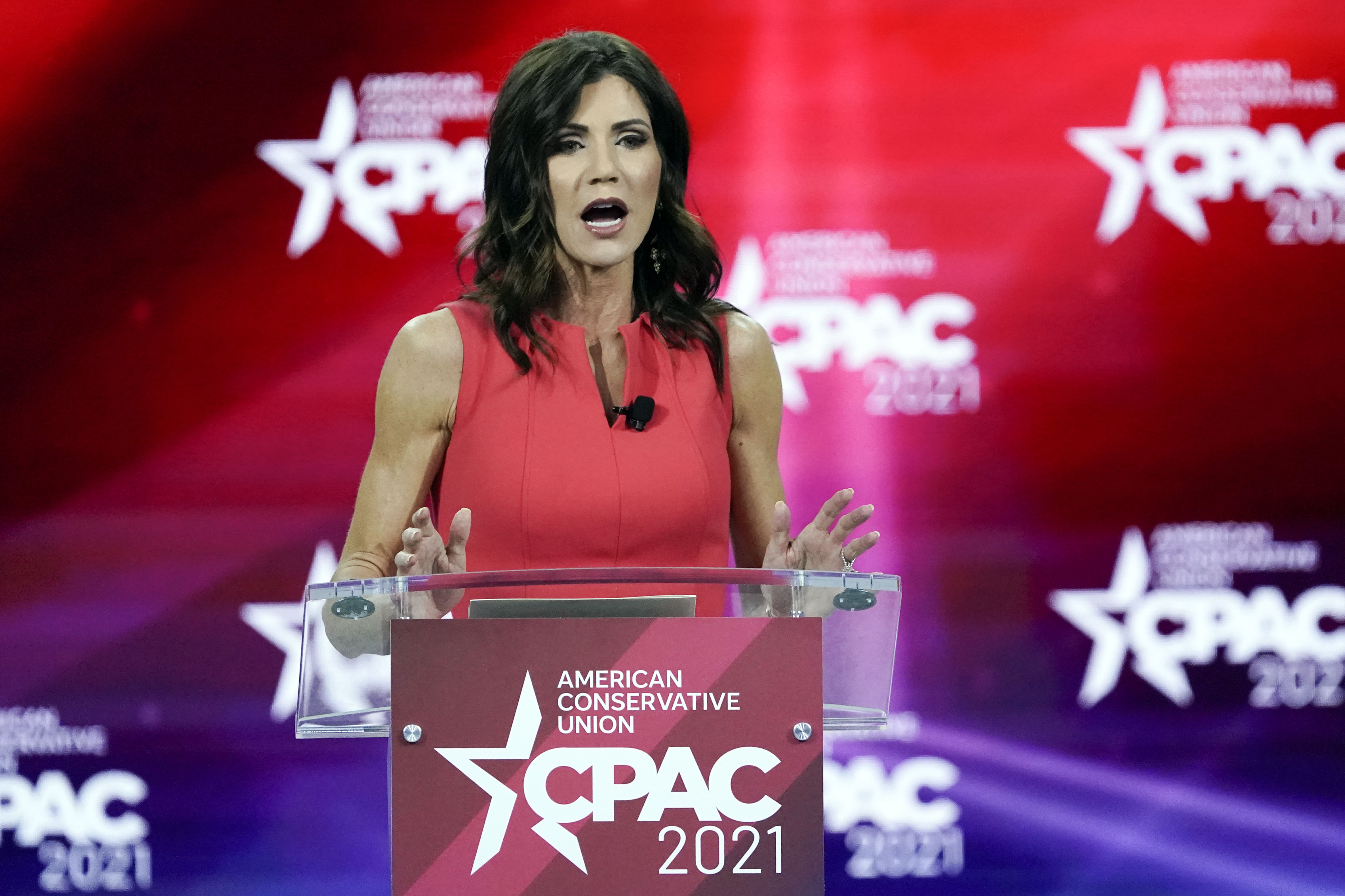 South Dakota Gov. Kristi Noem flew on MyPillow CEO Mike Lindell’s private jet on her way to the Republican Governors Association spring meeting in Nashville, Tennessee, this week, according to two people familiar with the matter.

Lindell, a close ally of former President Donald Trump, was kicked out of the event after he had promised to confront Arizona Gov. Doug Ducey and Georgia Gov. Brian Kemp about why they aren’t pushing to overturn the 2020 election results in their states. An RGA official had said he was not allowed to attend RGA events because he wasn’t a full member of the organization.

Lindell was able to gain access to the RGA meeting as a guest of Noem’s and as a prospective member, according to one of the people familiar with Noem’s travel arrangements.

Lindell told POLITICO earlier this week that after having arrived in Nashville on Monday and having planned to spend most of the week in the city, he instead left Nashville on Tuesday night by private jet. That left Noem looking for a new ride home, according to one of the people familiar with the matter.

In a brief phone interview, Lindell said he “is not revealing anybody who goes on my plane. I have people on my plane all the time and I don’t know who told you that. I’m not disclosing anything. … I’m not saying anything about it.

“Our conversation’s done,” Lindell added before hanging up the phone.

He later added in a text message: “Anyone who ever is on my plane is highly confidential! I cannot comment on that or my planes flights … This is for security reasons[.] I have had many threats since I went public with the dominion and machine evidence.”

In February, Lindell was sued by Dominion Voting Systems for $1.3 billion in a defamation suit accusing him of repeatedly and falsely saying that the company’s voting machines had rigged the election.

Noem and Lindell have appeared together at multiple Republican events in the past year. They both spoke at a Workers for Trump rally last September in Macomb County in Michigan, where Noem criticized Michigan Democratic Gov. Gretchen Whitmer’s handling of the Covid-19 pandemic and defended her own more laissez-faire approach to managing the outbreak in South Dakota. She also went to Minnesota that month with Lindell to campaign for Trump, saying in a Facebook post that it was her “honor” to travel with the MyPillow CEO.

“We both understand that we need to leave it all on the table to ensure President Trump wins on November 3rd,” Noem wrote.

Lindell also has traveled to South Dakota in recent weeks. He held a 1,650 person rally at Corn Palace in Mitchell, S.D., on May 10 where he unveiled a social media platform called Frank that he plans to use to amplify his claims that the election was stolen. The rally also featured a 15-minute speech by former Housing and Urban Development Secretary Ben Carson.

Noem, who is up for reelection next year, is seen as a likely 2024 Republican presidential candidate and earlier this week started a federal PAC called Noem Victory Fund.

She is not the first governor who has taken a non-state private jet this year. Whitmer was criticized for using a Michigan chemical company’s private jet to fly to Florida in March to see her father, even though she hadn’t been fully vaccinated, contradicting state guidelines about travel for people who haven’t gotten their full vaccine. She also used a plumbing company’s private jet to get to the inauguration in January at a cost of $22,670.

Most states allow governors to fly on friends’ private jets, although the gifts have to be disclosed under certain circumstances.

In Noem’s case, her travel on Lindell’s private jet appears to be legal. According to South Dakota law, no public officials or immediate family members of public officials can accept gifts from lobbyists of more than $100 during a calendar year. But the state has no rules on officials accepting gifts from non-lobbyists, such as Lindell.

The state also doesn’t require disclosing such gifts unless it constitutes more than 10 percent of the official’s family income in a year or more than $2,000.

“Is this illegal per South Dakota law? Probably not,” said Nikki Gronli, vice chair of the South Dakota Democratic Party, when asked about Noem’s flight. “Is it unethical? Definitely. Rich politicians getting flown around the country by rich associates looking for perks or future appointments is unethical.

“It’s also disturbing that our governor is fraternizing with a man who is being sued by Dominions Voting Systems for lying about the legitimacy of the 2020 election,” Gronli added.