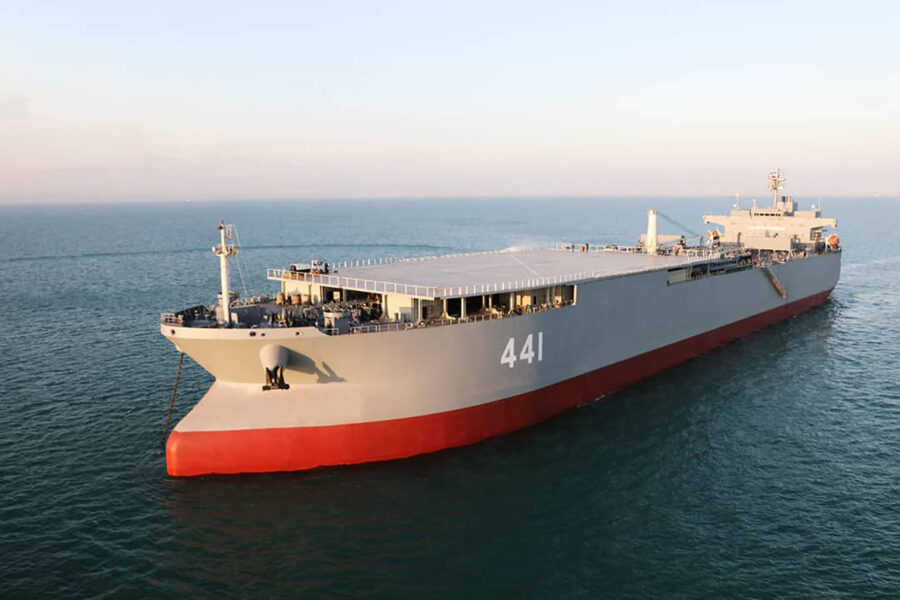 The U.S. national security community is monitoring two Iranian naval vessels whose ultimate destination may be Venezuela, according to three people familiar with the situation, in what would be a provocative move at a tense moment in U.S.-Iran relations.

An Iranian frigate and the Makran, a former oil tanker that was converted to a floating forward staging base, have been heading south along the east coast of Africa, said the people, who spoke on condition of anonymity to discuss a sensitive subject.

U.S. officials do not know for sure the destination of the Iranian ships, these officials said, but believe they may be ultimately headed for Venezuela. Iran’s intent in sending the vessels in the direction of the Western Hemisphere remains a mystery, the people said, as does their cargo.

The two countries — both of them facing severe U.S. sanctions — have developed closer ties over the last few years, with cooperation ranging from gasoline shipments to joint car and cement factory projects.

Senior officials in President Nicolás Maduro’s government in Caracas have been advised that welcoming the Iranian warships would be a mistake, according to a person familiar with the discussions. But it’s not clear whether Maduro has heeded that warning: At one point on Thursday, U.S. military officials understood the ships had turned around, but as of Friday morning they were still steaming south, one of the people said.

Lawmakers privy to the most sensitive intelligence information were informed over the past few days that the U.S. believed the Iranian ships may be heading toward Venezuela, but cautioned that the destination could change, according to a person briefed on the matter.

The mere presence of Iranian warships in America’s backyard would represent a challenge to U.S. authority in the region — and would likely inflame the debate in Washington over President Joe Biden’s decision to re-open negotiations with Tehran.

Iranian media has claimed the 755-foot long Makran, which was commissioned this year, can serve as a platform for electronic warfare and special operations missions, and Iranian officials have boasted of the ship’s missile and weapons capabilities. It is able to carry six to seven helicopters, as well as drones, they have said.

The timing of Iran’s apparent westward foray is especially inopportune for those hoping for a lowering of tensions with Tehran.

Since entering office, Biden has explored rejoining the 2015 agreement to curb Iran’s nuclear program, the Joint Comprehensive Plan of Action, which his predecessor Donald Trump abandoned in 2018. Those talks are ongoing in Vienna. The recent fighting between Israel and the militant group Hamas, long backed by Iran, also has fueled criticism from Republican lawmakers about the wisdom of re-entering the JCPOA.

Successive governments in Tehran and Caracas have made a habit of defying the United States, with whom each country has a complex history. The Venezuelan government was one of the first to recognize the Islamic Republic after the 1979 overthrow of the shah, a U.S. ally in the Middle East.

Tehran regularly objects to the presence of U.S. warships in the Persian Gulf region, and it has previously threatened to make a similar show of force in America’s backyard but never followed through.

Maduro’s authoritarian regime has been shunned by many countries, including its Latin American neighbors. The United States has imposed successively harsher rounds of sanctions that have punished an economy already wracked by mismanagement, corruption and Covid. Iran is one of Venezuela’s few close allies.

As Venezuela’s oil refining sector has collapsed in recent years, the Islamic Republic has sent multiple fuel tankers to the country to help with crippling gas shortages. In exchange, Venezuela’s government has supplied Tehran with much-needed cash and helped it build relationships in Latin America.

U.S. officials have watched those ties blossom with varying levels of concern.

The Trump administration designated the Revolutionary Guards a terrorist organization in 2019, and killed its Quds Force commander, Gen. Qasem Soleimani, last year in an airstrike in Iraq.

Last summer, U.S. authorities seized four ships carrying cargo from Iran to Venezuela, as the Journal reported. At one point on their journey, those ships and five others were traveling with an Iranian naval intelligence ship, U.S. officials told the paper. The ships did not reach Venezuela.