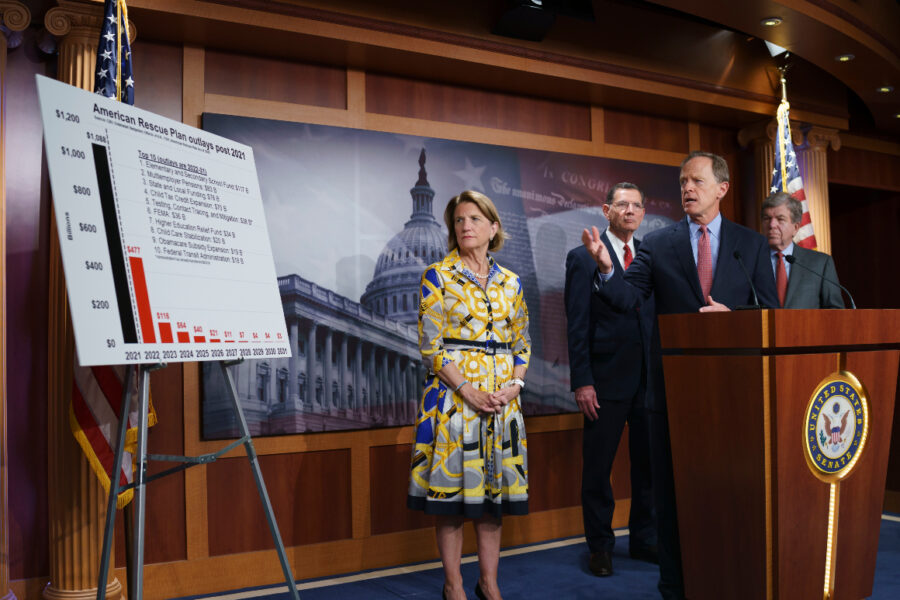 But with talks ongoing and new concessions being offered, leaders of liberal organizations say they’re losing patience, fearful that the White House is wasting time in pursuit of Republican votes that are unlikely to materialize.

The latest bout of anxiety came this week after Biden met with the lead Republican negotiator, Shelley Moore Capito of West Virginia, and backed off his insistence that a narrow infrastructure bill be paid for by a hike in the corporate tax rate. Instead, the president floated a corporate tax floor of 15 percent, arguing that it would raise money by going after companies that have avoided tax liabilities. It also avoids crossing Republican’s red line: undoing parts of Donald Trump’s 2017 tax bill that lowered corporate rates to 21 percent.

“We’ve seen this dynamic over and over again where Democrats are effectively negotiating with themselves, watering down their own package, not in exchange for votes but in exchange for the hope of keeping the negotiations going,” said Leah Greenberg, a co-founder of the liberal organization Indivisible. “And the inevitable result is that what passes is weaker and less popular than what would have passed if they had gotten bigger and bolder to begin with.”

“Every day that passes where we’re still sort of hopelessly pursuing a mirage of bipartisanship is a day that we’re not moving on to the priorities that Democrats were actually elected to do,” Greenberg added, pointing to voting rights, equal pay and nondiscrimination laws.

The rising anger over infrastructure talks is feeding calls in the progressive political ecosystem to ramp up the pressure on Biden to put an end to the negotiations and move ahead with efforts to pass a spending bill through a process known as budget reconciliation, which requires just 50 votes in the Senate. Up to this point, liberal organizations have largely given the president space to negotiate and have praised not just the scope of his proposals — especially on Covid relief — but his willingness to move quickly.

The White House had to earn that trust. According to more than a dozen activists and movement leaders interviewed for this piece, the White House has taken the task of progressive outreach incredibly seriously. A host of close Biden aides are routinely in touch with top officials on a range of policy fronts. There are regular meetings and informal chats, during which frank discussions are encouraged.

“They have a whole engagement team and there are so many different calls,” said one top official at a leading environmental group. “They do a pretty incredible job with outreach. I think the reason why there is not more progressive frustration is that they do feel heard.”

Over the past few weeks, sources at these meetings say, White House representatives have been repeatedly pressed on infrastructure talks, including fears that if a deal is reached, it could sap momentum for a follow-up bill that includes the rest of Biden’s jobs and family plans, like child care, community college and parental leave. In a recent meeting the administration was asked why they blew through the president’s initial Memorial Day deadline for talks to end. The response has been essentially what the administration says publicly: Biden believes that a big bipartisan bill is important, but he won’t let the pursuit of it override the need to get something done.

Andrew Bates, a White House spokesman, said the president is engaged in good faith talks with both parties in Congress and “has been emphatic that inaction is not an option, that progress needs to be made in the short term, and that he is open to other conversations about infrastructure.” He pointed to a June 9 House markup as a key date. “Equity is at the heart of his agenda,” Bates added.

But progressives are done waiting. Drawn out negotiations, they say, could hurt the prospects of passing other liberal priorities — not only those included in Biden’s jobs and family plans, but campaign promises like voting rights legislation and police reform.

“There’s no deal to be had here,” said Brian Fallon, an Obama alum and executive director of the advocacy group Demand Justice, which supports liberal judicial nominees. “To the extent that it’s a political imperative for the White House to want to look like they tried to get a bipartisan deal, they’ve achieved that. So what’s clouding their judgment this time?”

Some leaders on the left pointed to the recent GOP votes blocking a bipartisan commission to investigate the Jan. 6 insurrection as an inflection point. For progressives, the vote further cemented that the White House, for all its wishful thinking, isn’t dealing with good-faith negotiators. Others noted the fact that Republicans in 2017 had no problem pushing through their tax cut by a partisan vote and are now trying to rule the bill off limits during bipartisan negotiations.

And some activists say the administration’s dedication to striking a deal with Republicans to create traditional infrastructure jobs creates the impression that they are prioritizing white blue collar workers over women of color working in elder and child care, which the president has, for now, put off for a second, subsequent bill.

Maurice Mitchell, a leader with the Movement for Black Lives coalition, said he saw a “lack of coherence” in Biden stressing the need for urgent action to close the racial wealth gap in a speech in Tulsa, Okla., but a day later engaging in further negotiations with Republicans. The GOP’s push to pass a narrow bill focused on physical infrastructure like roads and bridges prioritizes “traditional white, male laborers” said Mitchell, risking the elements of Biden’s plan to boost working conditions for elder care jobs held primarily by women of color and immigrants.

“The way that people talk about what does infrastructure mean and the difference between physical infrastructure or a broader definition of infrastructure and the care economy — folks are not understanding the race and gender implications of these questions,” said Mitchell, executive director of the Working Families Party. “They drive at the heart of who is being prioritized in these policy conversations on the Hill, which people are being prioritized.”

Out of fear about the direction that talks are heading, some groups are planning more direct action. The liberal advocacy group MoveOn is set to mobilize its members and target lawmakers attempting to water down Biden’s proposal. Sunrise Movement, a progressive climate change group, wants Biden to meet with them rather than Republicans. In an internal strategy memo circulated by Sunrise this week, leaders called for “short, intense” bursts of pressure on the White House and Democrats to “stiffen their spines in negotiations with moderate Republican and Democratic senators.”

“If we learned anything from this year alone, the GOP is not the party that I think Biden idealizes,” said Ellen Scales, a spokesperson for the group. “Voters in 2022 and 2024, young people, are not going to ask whether or not Joe Biden was kind to Shelley Moore Capito — they don’t even know who that is. They’re going to see whether or not he dealt with the climate crisis and created millions of good jobs.”

The White House says it’s not going to negotiate much longer and maintain that the president wants to move quickly. An administration official said they still needed to play ball to the extent that it helps firm up the support of moderate Senate Democrats, who will be needed if Biden falls back on using reconciliation to push a bill with only Democrat votes. And White House advisers like Steve Ricchetti have told Democrats that a concerted bipartisan attempt would benefit Democrats politically.

“The tail is wagging the dog here and the strategy is being driven by congressional Democrats that are high on their own supply in terms of enjoying the constant running back and forth of offers with Republicans,” said Fallon. “Voices like Ricchetti,” Fallon assumed, are “arguing internally” to give moderate congressional Democrats “more space” to bring along Republicans.

The White House and Republicans remain at odds over how to pay for the package, the size of it, and what actually defines infrastructure. Though Biden revised his proposed tax hikes, and Republicans are entertaining increasing their current $250 billion offer, few on the Hill or in the White House expect negotiations to ultimately succeed.

Meanwhile, progressives are fearful that Republicans may actually take the deal that Biden has offered and fracture the Democratic party in the process.

“We are rooting for them to be dumb,” said one top consultant who advises several progressive groups. “If they were smart they would take it. They’d box Biden in on it. And, not just that, he would legitimately be fine with it. And the left would be livid.”