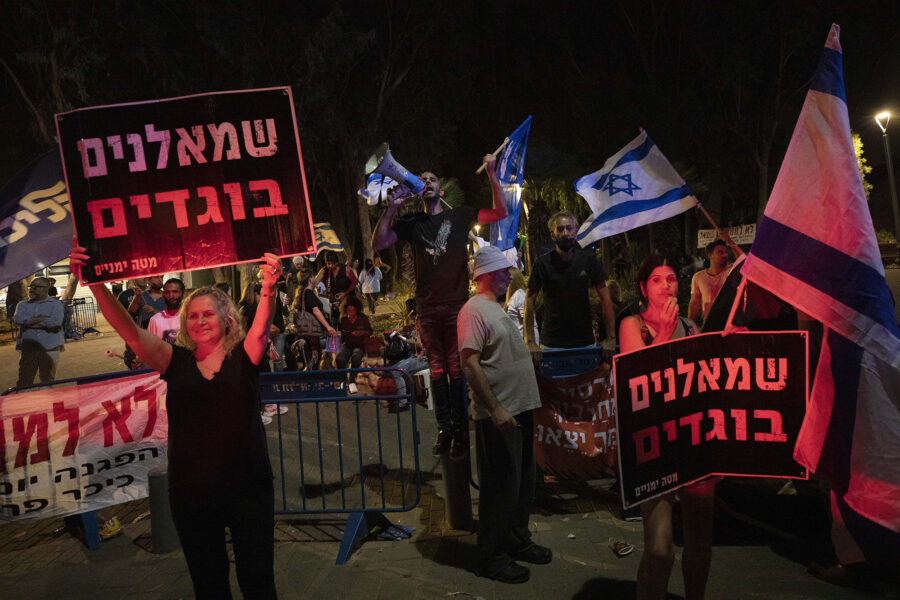 TEL AVIV — Just before midnight on Wednesday, many Israelis got the news they had been waiting two years and four elections to hear: “I have succeeded in forming a government.”

Israel’s so-called “government of change” has, of course, made international headlines because it is set to oust Benjamin Netanyahu, whose 12 consecutive years as prime minister have been defined by a divisive style, corruption scandals, and a rightward shift in political life. But the prospective new government, which would install the right-wing Naftali Bennett as prime minister, followed in 2023 by the centrist Yair Lapid, is historic for other reasons as well. The coalition itself — a motley crew of eight parties spanning the ideological rainbow with little in common but opposition to Netanyahu — is unprecedented. Moreover, the Islamist Ra’am party is poised to make history by becoming the first Arab party to join an Israeli governing coalition.

And yet in many ways, Thursday in Israel felt like any other, as if this wasn’t the day millions had been waiting for. Tel Aviv, the heart of liberal opposition to Netanyahu, seemed almost quieter than usual. It was as though people were holding their breath, in fear that by exhaling, everything would come crashing down. Indeed, as any Israeli will tell you, it is still too soon to celebrate — or mourn — the downfall of the man beloved by his base as “King Bibi.” Given Netanyahu’s canny political skills and determination to undermine the coalition, anything could happen in the roughly eight to 10 days before the Knesset votes on the fate of the new government.

Netanyahu has made himself so synonymous with Israeli politics that many here find it hard to believe that this will truly be the end of an era. After 12 consecutive years under Netanyahu’s leadership — 15 in total — and over two years of inconclusive elections, liberal Israelis who might otherwise be jubilant are approaching this strange moment with a combination of optimism, apprehension, and disbelief. Adding to their conflicted feelings are the prospect of embracing the nationalist, pro-settler Bennett as prime minister; the unusual, fragile mix of hard-right and left-wing parties that would lead the new government; and lingering questions about whether Netanyahu and the divisive atmosphere he fostered will really fade away.

“Netanyahu has been at the helm of Israeli politics for a generation,” said Yohanan Plesner, president of the Israel Democracy Institute and a former Knesset member. “Young Israelis do not know any reality other than a country controlled by Netanyahu.” 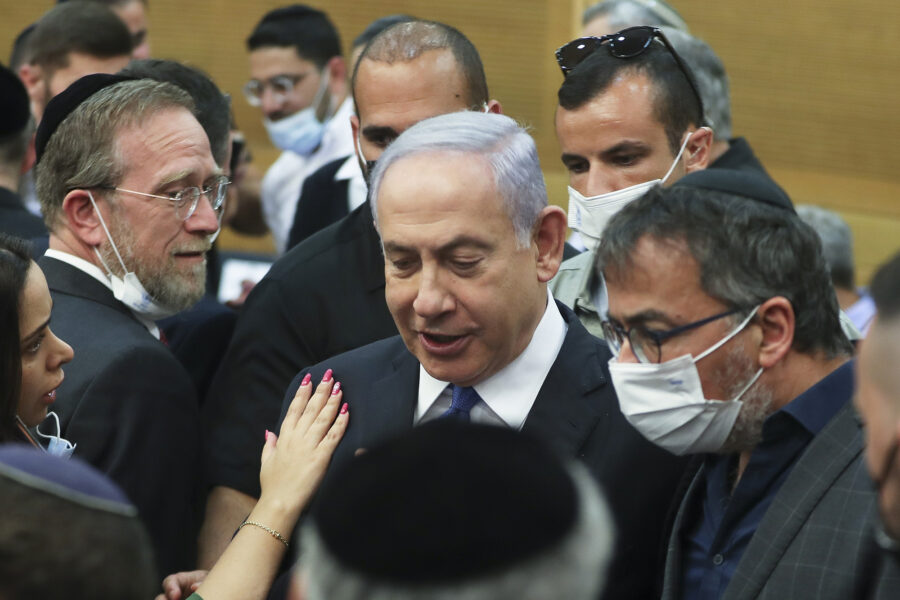 For all its potential to heal a deeply divided nation, for many Israelis — including myself — this moment feels almost bizarrely unbelievable. “It doesn’t feel like the big change that people here have been hoping for,” said Ruth Margalit, an Israeli journalist and friend of mine. “But when you look at the last 12 years, I think Netanyahu has managed to neuter political debate so much that it only makes sense that there is no one single rival to overtake him and that the only alternative is this sort of mishmash of a coalition.”

That mishmash, Margalit added, is a direct product of Netanyahu’s vitriolic brand of politics, which succeeded in uniting an improbable group of bedfellows against him. “It says something about the political culture here that a candidate with six seats in the Knesset out of 120 is accepted by all the parties as a natural fit for prime minister,” she said, referring to Bennett. “It’s quite insane when you think about it.”

At a small protest in Tel Aviv Wednesday night, liberal Israelis were rallying in support of the proposed new government. Then the news broke, and the protest turned into a celebration. “My friends who were there were saying how strange it felt go out on the streets for Naftali Bennett,” Margalit laughed. “We could not have expected this in a million years.”

If this unlikely partnership of former political enemies holds, Israel will have pulled off a remarkable achievement in multi-party democracy, with lawmakers holding vastly diverse views uniting to remove the most powerful, dominant leader in a generation. Yet Netanyahu’s provocative, alienating style has imbued Israeli politics with a toxicity that some fear will linger long after he leaves the scene — that is, if he does leave, which thus far he shows no intention of doing. As the prime minister’s opponents look nervously to the upcoming Knesset vote, the question remains how long it will take for a deeply bruised country to emerge from Netanyahu’s shadow.

One of the more surprising members of the new coalition is Meretz, a left-wing party that calls for an end to Israeli occupation of the West Bank. The last time Meretz sat in a governing coalition was in 1999, before the suicide bombings of the Second Intifada essentially erased the left-wing Israeli peace camp. Yasser Arafat’s rejection of then-Israeli Prime Minister Ehud Barak’s peace offer at the Camp David Summit in 2000 — and the wave of deadly terror attacks by Hamas that followed — led many Israelis to conclude that Palestinians were not truly interested in peace. That natural drift to the right was exploited, then steered to an extreme, by Netanyahu.

Now, Israelis of many political persuasions hope Bibi’s departure will eliminate some of the vitriol that has characterized politics under his leadership. Knesset member Tamar Zandberg, the former head of Meretz who is set to become environment minister in the new government, faced nightly protests outside her home this past week, as well as death threats from right-wing extremists against her and her 15-month-old daughter.

She’s encountered threats before, but says this is the first time the threats seemed to have an immediate goal. “This was organized in order to make an impact on the timing of forming the new government I’m supposed to be a part of,” Zandberg told me on Wednesday, with coalition negotiations still underway. She noted that Netanyahu mentioned her name five times in a televised address delivered after Bennett announced he would work toward a coalition. “And then the next day suddenly it all started,” she said. “I think it’s very similar to what Trump and his hate groups and supporters were doing in the time before the Capitol attack.”

This atmosphere of hatred and division is precisely why Zandberg and other left-leaning politicians were willing to join hands with their right-wing rivals. “No question, this is not our dream government,” she said. Yet most of her voters support the new government, she said, “because they want to change the toxic air they breathe from their leadership.”

“It’s not just the corruption and the indictments and the right-wing policies,” Zandberg continued. “Israelis got used to hate as a way of life. … There is a deep illness here that needs to be healed.”

There are already signs that the “government of change” will adopt a more conciliatory tone than Netanyahu ever did. In his call to President Reuven Rivlin informing him that he had reached a coalition agreement, Lapid said, “This government will work to serve all the citizens of Israel, including those who aren’t members of it, will respect those who oppose it, and do everything in its power to unite all parts of Israeli society.”

Bennett, for his part, apologized on Thursday for derisive comments he previously made about Mansour Abbas, the leader of Ra’am. He called the new, unprecedented partnership “a non-negligible opportunity to turn over a new leaf in the relationship between the state and Arab Israelis.”

Still, many feel the atmosphere will not change overnight.

“It feels like for a while at least, not much will change,” Margalit said. “I don’t think they will come in with these sweeping reforms, but at least maybe there will be some sort of renewed protection of and trust in democratic institutions, such as the courts and the press. That has been absent for a while.”

The prospect of Netanyahu’s ouster has also raised hopes of returning to more normal governance. Under Netanyahu, the government acquired a reputation for leaving important positions unfilled, appointing loyalists to positions they were unqualified for, and, for the last two years, failing to pass a budget or initiate any legislation at all.

“In some respects,” said Plesner, “the bar for this unity coalition is not very high. Just managing the affairs of the state in a reasonable manner would be considered a significant change.”

Even with the coalition agreement signed and a Knesset vote likely to happen around June 14, Netanyahu is doing what he does best: anything he can to stay in power. The morning after the agreement, the prime minister took to Twitter, declaring, “All the lawmakers who were elected by right-wing voters must oppose this dangerous left-wing government” — even though it’s led by Bennett, a decidedly right-wing former aide to Netanyahu. That same day, the pro-Netanyahu newspaper Israel Hayom, backed by the late American mogul Sheldon Adelson, ran the front-page headline, “Netanyahu is not giving up.” 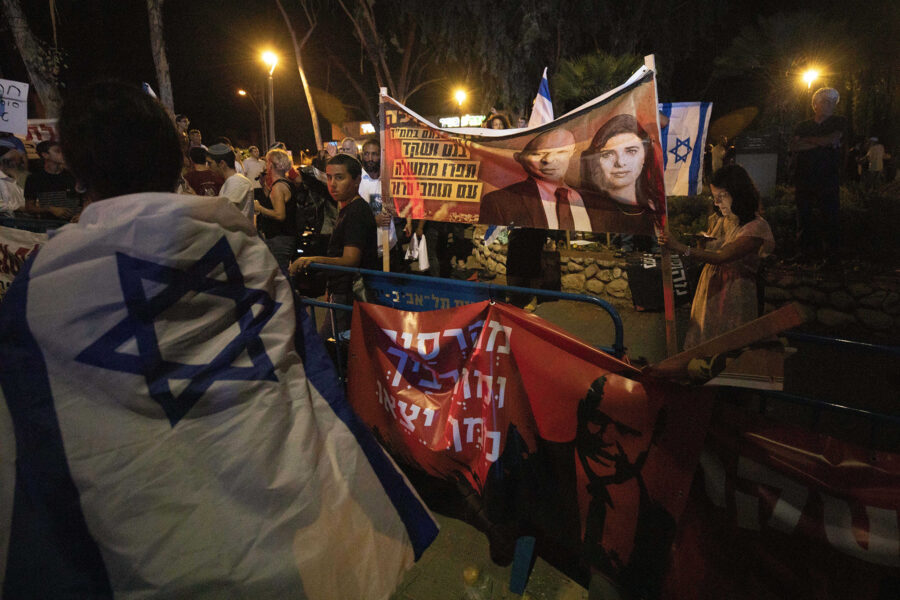 Netanyahu has been calling coalition members, according to lawmakers I spoke with and Hebrew media reports, urging them to back out before the Knesset vote is held. At least one member of Bennett’s party is reportedly already considering doing so. With such a small majority — 61 out of 120 Knesset seats — the fragile coalition cannot afford a single defection. Netanyahu’s vilification has helped spur protests outside the homes of prospective coalition members, with some receiving death threats.

Even if the new government survives, many wonder how long it can last. Given the competing views of its right, left and Islamist lawmakers, the coalition will likely face grave obstacles as it works to govern long enough to keep Netanyahu at bay. While technically the full term would be four years, most analysts do not expect it to survive that long.

“I wouldn’t rule out the possibility of this government being very short-lived for just a few months and falling apart,” said Plesner. “Netanyahu is an extremely savvy politician, and as chairman of the opposition he will try to undermine this new political outfit.”

The main goal of Lapid, Bennett and other leaders will be to govern long enough, and effectively enough, to prove the country can indeed thrive without Netanyahu at the helm.

Zandberg is realistic about the challenges ahead. “I’m sure it will be difficult,” she said. “No party will progress in everything we desire, but at the same time we feel it’s absolutely necessary to change the government.”

Still, the likely future environment minister spoke optimistically about the possibility of moving ahead on climate issues, which saw little progress under Netanyahu. She also noted that an Arab Knesset member from her party, Issawi Frej, will serve as regional cooperation minister. This new coalition, if sworn in, will include more Arab lawmakers, and more ministerial portfolios for women, than any other in Israeli history.

While it is not part of the coalition, the Joint List, which consists of numerous Arab-majority parties, is considering sitting out the vote, which could enable the government to receive the majority of votes it needs to be confirmed. By helping the coalition withstand Netanyahu’s efforts to pull it apart before it comes into being, Arab-Israeli citizens could play a crucial and perhaps ironic role in ushering Israel out of Bibi’s shadow.

Like many Israelis this week, Joint List leader Ayman Odeh has mixed feelings about what’s next. He believes the new government is highly problematic, given the far-right stance of some of its members, and is far from confident that Netanyahu is going away. Still, he remains cautiously optimistic about the future of an Israel without a Prime Minister Netanyahu for the first time since 2009.

“It is too early to say that Netanyahu’s days are over,” Odeh told me. But, he added, “We will do everything we can to end the Netanyahu era. As long as there is a horizon for a post-Netanyahu Israel, I want to be a part of that horizon.”