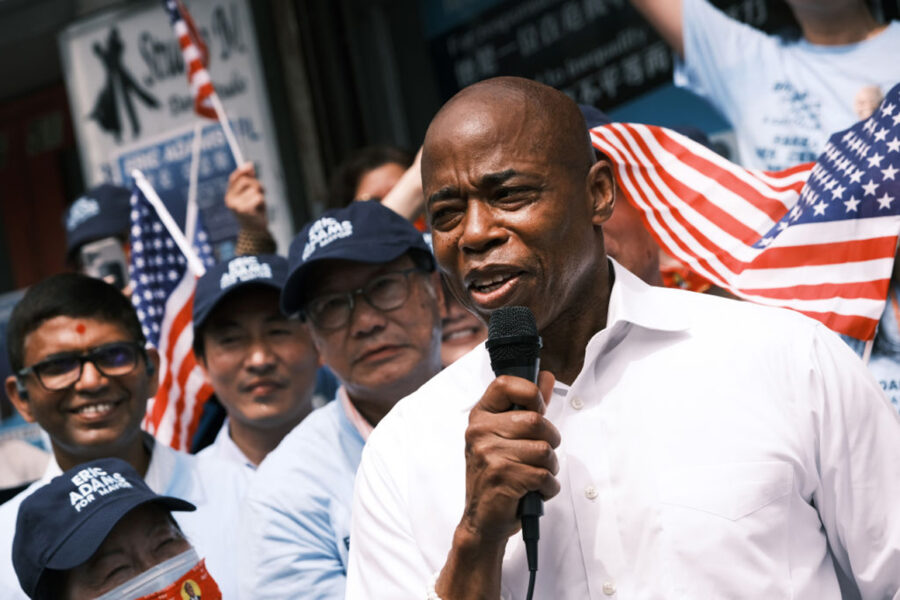 NEW YORK — Mayoral frontrunner Eric Adams spent Wednesday morning trying to put to bed questions about where he sleeps with a tour of his cluttered basement apartment in Brooklyn and an emotional explanation for his insistence on personal privacy.

On Tuesday, POLITICO reported Adams, the Brooklyn borough president, has been staying overnight and keeping late-night and early-morning hours in the government building where he and his staff work. When he is not laying his head in the taxpayer-owned building, official documents and information provided by his campaign presented conflicting accounts of where he resides.

In response, Adams and his team on Wednesday sought to answer questions about his residency with a press conference featuring coffee and vegan pastries, and provided new or altered details about his living situation while leaving several inconsistencies outstanding.

The candidate, speaking outside of his four-unit rowhouse in Bedford-Stuyvesant, unequivocally denied that he lives in the co-op he owns with his longtime partner in Fort Lee, N.J.

“How foolish would someone have to be to run to be the mayor of the city of New York and live in another municipality?” Adams asked, standing by his son, Jordan.

He has, however, called into campaign events from the Garden State unit.

Adams dialed into a pair of mayoral forums in January and February from across the Hudson, according to a POLITICO comparison of his virtual backdrop with real estate listings and floorplans of the property. Campaign adviser Evan Thies confirmed the location Wednesday, shortly after Adams’ press conference.

Adams also appeared at five online events hosted by the borough president’s office in 2020 from the New Jersey apartment.

His opponents seized on questions over his whereabouts.

“I’ve said that Eric Adams is unprincipled. He doesn’t follow the rules of the road. He’s been dogged by corruption investigations everywhere he’s gone,” said another leading candidate, Andrew Yang, at a campaign stop Wednesday. “And now, he probably lives in New Jersey.”

Yang, who had previously been the frontrunner in the Democratic primary, demanded Adams release his E-ZPass records from the last few years, adding, “If you’ve been in Brooklyn, then it will show nothing and then we’ll move on.”

Adams said he used to go to New Jersey periodically on weekends to visit his partner, Tracey Collins, but skipped the cross-state trips altogether during the height of the pandemic last year, when he moved into his office in Brooklyn Borough Hall to maximize time spent working. Until Saturday, he said, he had not seen her for two months due to his hectic work schedule.

“I never hid that I own a co-op in New Jersey with Tracey, but my permanent residence is in Brooklyn,” Adams said.

He said he spends most of his days campaigning ahead of the June 22 Democratic primary, leaving him little time to complete his official duties as borough president.

“I’ve been entering borough hall at 1 in the morning, working until 3 to 4 with my staffers who come in because they believe — and then getting up at 6:30, 7 to go to the train station,” he said. “It’s not a mystery where I am.”

Thies said Adams travels to New Jersey by bus or government car, and said he has instructed his government staff to provide the E-ZPass records.

The accounting of his interstate travel was part of a tearful backstory Adams relayed outside his brownstone Wednesday morning. He recalled an incident from his days as an outspoken member of the NYPD when someone shot at his car during a predawn drive — an event that spurred him to closely guard his personal life from then on.

Yet at the same time, Adams and his team sought to clear up inconsistencies regarding his living arrangements by offering new or amended details compared to the day before.

Thies said Tuesday, for example, that Adams lived in the basement of the house. His son and a tenant lived on other floors of the property, and one unit was vacant. But on Wednesday, his son said he lives in New Jersey and stays overnight when he’s in town late for grad school or work. And Thies said the vacant unit has now been filled.

The interior of the basement unit, which Adams showed to reporters, contained food and sneakers that did not appear to belong to the 60-year-old, immaculately-dressed vegan. Thies said Jordan spends time in his father’s apartment to watch cable TV and occasionally sleeps on the couch, but goes upstairs when his dad gets home.

He also said Adams has filled the vacant unit.

Adams purchased the property in 2002 and, according to Thies, has lived there off-and-on for years until permanently moving in in 2017. At some point around 2013 he signed his share of a Prospect Heights co-op over to his former girlfriend and moved to an apartment on McKeever Place while doing renovations at the Lafayette Avenue house — a timeline that is confirmed by his voting record.

His opponents weren’t buying it.

“OK, can we just have some real talk for a minute here? This is bizarre,” Maya Wiley, another leading mayoral candidate, said during a campaign stop in Manhattan. “I think there’s some straight-up questions that are just fundamental about where do you live, Eric. And where are your tax returns? How many years have you been collecting rents on properties without reporting those.”

His four-unit home is listed with the city’s housing agency as a three-unit house, and is not registered, as is required of multi-family buildings. Thies said the department’s website is not accurate and an agency representative did not respond to questions from POLITICO.

Adams said he amended several years of tax filings to reflect rental income that was omitted from 2017 through 2019 — which POLITICO discovered by comparing his returns to his financial disclosures on file with the city Conflicts of Interest Board. The Adams campaign has yet to provide the clarified forms.

Questions also remain on Adams’ campaign offices. Thies said he has used space within MetroTech, an expansive office campus near Borough Hall. That also happens to be where Frank Carone —  attorney to the Brooklyn Democratic Party that is unofficially supporting Adams’ campaign — has office space.

His campaign finance filings do not reflect any office rental payments to Carone. Adams confirmed on Wednesday he is renting space from Carone in MetroTech — but campaign documents do not show any such payment.

Thies said it was rolled into a $7,500 fee for petitioning that Adams paid Carone and would be more clearly delineated in a future filing.