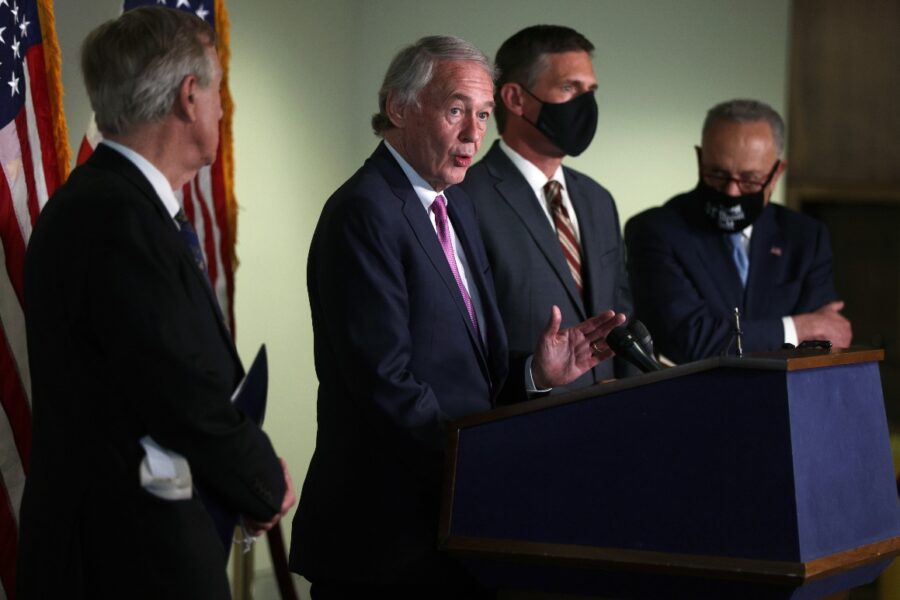 Progressive anxiety about sufficiently strong climate change provisions being left out of forthcoming infrastructure legislation burst into public Wednesday with several Democratic lawmakers warning they would not rubber-stamp eventual legislation.

Faced with razor-thin majorities in both chambers and bipartisan negotiations that have languished for weeks, many Democrats behind the scenes worry climate change has faded from center stage — and they worry about sacrificing what the scientific community says is necessary to stave off the worst consequences to claim a bipartisan victory.

“The White House and Democratic Congress need to hold strong on real meaningful bold substantial climate provisions that President Biden proposed in his American Jobs Plan,” Sen. Martin Heinrich (D-N.M.) said at an event with Climate Power on Wednesday. “There is little appetite in our caucus for an infrastructure plan that ignores the greatest crisis, the most existential crisis that we face.”

Earlier in the day, Heinrich tweeted insufficiently ambitious climate legislation “should not count on every Democratic vote,” and linked to a POLITICO article in which National Climate Advisor Gina McCarthy acknowledged President Joe Biden might not get all of his loftier climate priorities, such as a clean energy standard, in eventual infrastructure legislation.

At the same virtual event, Sen. Michael Bennet (D-Colo.) said he was “very confident” the Senate would ultimately be able to coalesce around an infrastructure package with a major climate title, including a clean energy standard. He added later he “agree[s] wholeheartedly” with Heinrich’s sentiment that Democratic votes should not be taken for granted.

“In fact, I think that’s the only infrastructure bill we can pass out of the Senate,” he said of one with sufficiently strong climate provisions.

One of the upper chamber’s most vocal climate action advocates, Sen. Sheldon Whitehouse (D-R.I.), said in an interview “it’s probably wise not to get too excited about alleged pieces of an unformed bill” but conceded there was much work to do.

“I’m still very anxious and I’m going to stay very anxious until we have a solid 1.5 degree [Celsius] bill and a path to passage,” he said, referring to strong enough provisions to limit global temperature increases to that level.

Whitehouse said the breakdown of talks between Senate Republicans and the Biden administration didn’t help or hurt prospects for climate action because “that was never going to be the route of a serious climate bill.”

After the flood of progressive tweets and comments, McCarthy linked to the POLITICO article and tweeted: “When @POTUS thinks climate, he thinks jobs. That’s why – and let me quote this article – ‘the White House [is] fighting to keep every piece’ of the American Jobs Plan and deliver ‘what is necessary to reach its climate target.’ We need to get this done.”

Raad said his group and allied progressive outfits had openly warned the administration about dealing with Republicans, worrying that critical provisions like the standard could fall by the wayside — a sentiment he said some Democratic senators reflected in growing openness to publicly criticize the White House for perceived trade-offs on climate.

“Senators are bolstering their case but also sending a message that half-measures and compromises on the defining issue of our time are not acceptable,” he said.

The escalation comes as several senior Democrats have outlined a plan whereby they would pass a bipartisan package through regular order — and come back to do other Biden administration priorities, like climate change, through a reconciliation package.

“The more traditional stuff — roads, highways, bridges, rail, ports, safety, all that stuff, broadband — that would be handled through regular order,” Environment and Public Works Chair Tom Carper (D-Del.) told reporters on Tuesday. “Then if we’re unable to also do the other issues that the president has characterized as infrastructure, [we’d] come back and do those in a different way.”

They must also contend with the fact that some moderate members of the conference, most notably and visibly Sen. Joe Manchin (D-W.Va.), have expressed reluctance to pass legislation with Democratic votes alone.

Heinrich’s comments were amplified and echoed by Rep. Alexandria Ocasio-Cortez (D-N.Y.), who suggested progressives in the narrowly-divided House also wouldn’t vote for a package without strong enough climate change provisions.

“Mitch McConnell and the Koch brothers are not worth setting the planet on fire for,” she tweeted. “I know some Dems may disagree with me, but that’s my unpopular opinion of the day.”

Zack Colman contributed to this report.