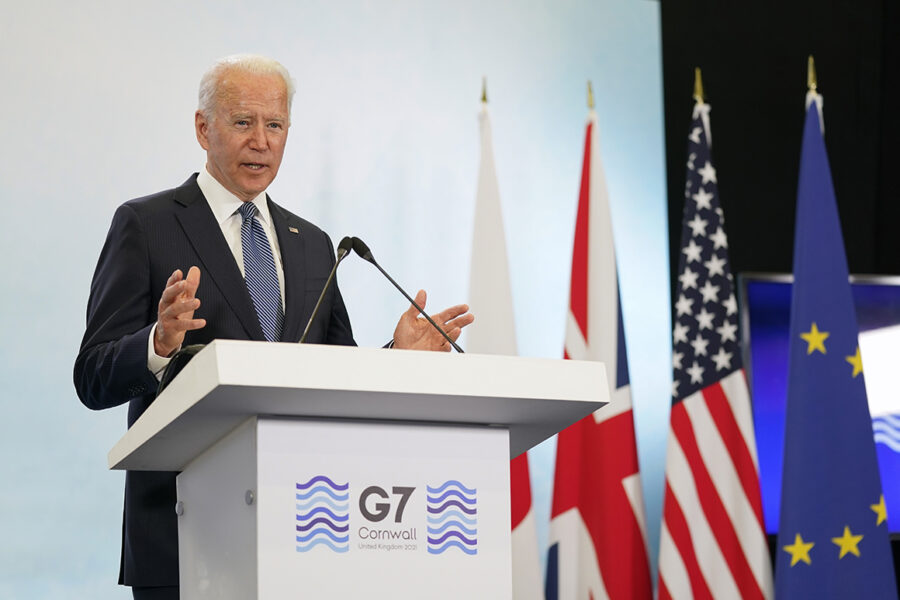 PLYMOUTH, England — President Joe Biden vowed on Sunday that the U.S. would once again work alongside its democratic allies to fight autocratic governments, singling out both Russia and China for aggressive behavior.

Biden never uttered his predecessor’s name in a news conference following the G-7 meeting of world leaders, but he spoke about his commitment to reengage America on the world stage after four years of Donald Trump’s “America First” policies.

“We’re in a contest … with autocrats, autocratic governments around the world, as to whether or not democracies can compete with them in a rapidly changing 21st century,” Biden said at the Newquay airport in the southwest part of the country.

Biden repeatedly said his goal wasn’t conflict with adversaries but to find points of compromise. Still, he said, where leaders fail to act with behavior that is “consistent with international norms,” the U.S. will respond and hold the countries accountable.

“How we act, whether we pull together as democracies, is going to determine whether our grandkids look back 15 years from now and say, ‘Did they step up? Are democracies as relevant and as powerful as they had been?’” Biden said.

On Sunday, the world’s wealthy democracies agreed to challenge China’s economic and human rights policies after spending days tussling over how explicitly to admonish the country in a joint declaration.

“China has to start to act more responsibly in terms of international norms on human rights and transparency,” Biden said. “Transparency matters across the board.”

The president, who was pressed on whether the world leaders had taken enough action against China, noted that China wasn’t mentioned the last time the G-7 leaders convened. “What I think you’re going to see is straightforward dealing with China,” he said.

Biden now heads to Brussels, where he will hold several meetings — NATO and summits with European Union and European Council leaders — in part to talk about Russia before he meets with that country’s leader, President Vladimir Putin, one on one in Geneva.

Biden said at his news conference that he agreed with Putin’s recent assessment that U.S.-Russia relations were “at a low point,” but he also defended his response to Putin’s actions and his decision to meet with him.

“I think he’s right that it’s a low point, and it depends how he responds to acting consistent with international norms, which in many cases he has not,” he said.

Biden and Putin will meet in Switzerland on Wednesday before Biden gives his own news conferences after the meeting.

Putin, in an interview with NBC on Friday, said Russia’s relationship with the U.S. had “deteriorated to its lowest point” in recent years.

Biden has been criticized for even suggesting a meeting with Putin after his allegations of election interference, human rights abuses and cyberattacks. But the president said he would not shy away from calling out Putin on that behavior while negotiating on other issues, such as climate change, rebuilding Syria and weapons reductions.

“It’s about making myself very clear what the conditions are, to get a better relationship are — with Russia,” he said. “We’re not looking for conflict. We are looking to resolve those actions which we think are inconsistent with international norms.”

But Biden was candid about America’s inability to change Putin’s behavior through measures such as sanctions, which have not worked in the past.

“Let me say it this way: Russia has engaged in activities which we believe are contrary to international norms, but they have also bitten off some real problems they’re going to have trouble chewing on,” he said.

Biden said that Putin’s openness to swap cyber criminals with the U.S. was “potentially a good sign of progress” and that he would be open to doing that.

But in an exchange with reporters on Air Force One later Sunday, national security adviser Jake Sullivan clarified Biden‘s comments on a potential swap of cyber criminals. Sullivan said Biden wasn‘t agreeing to an exchange, but instead said that Putin should be held accountable for harboring cyber criminals. “This is not about exchanges or swaps or anything like that,“ Sullivan said.

At his first news conference of his first foreign trip as president, Biden repeatedly stressed that the U.S. was back to playing a leadership role in foreign affairs, seeking to contrast himself without saying Trump’s name. European leaders largely agreed this past week, greeting him warmly in part because some were relieved not to have to deal with Trump anymore.

“America is back at the table,” Biden said. “The lack of participation in the past and full engagement was noticed significantly, not only by the leaders of those countries, but by the people in the G-7 countries. And America is back in the business of leading the world alongside nations who share our most deeply held values.”