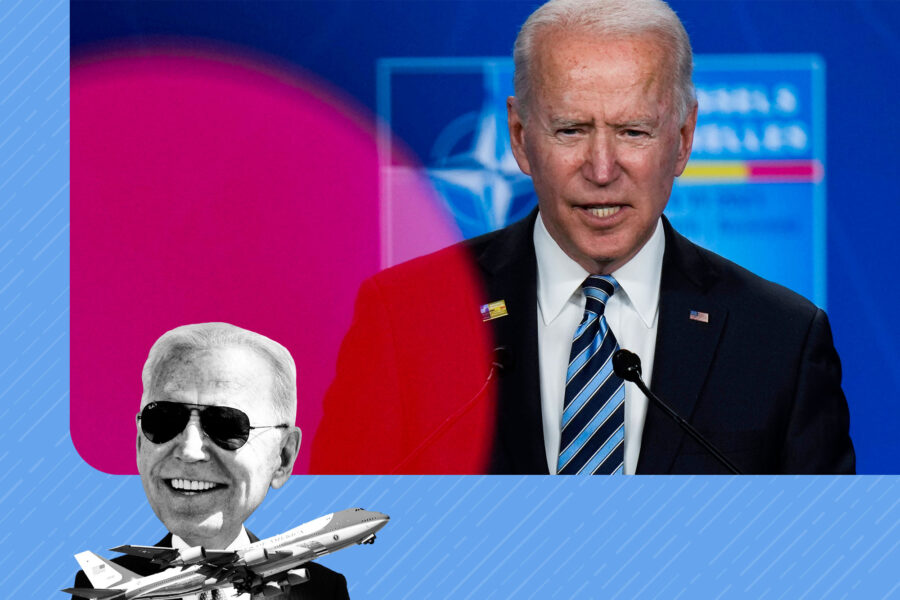 Ukraine President Volodymyr Zelensky may need to get better at Twitter. Chiming into the NATO summit Twitter conversation, the Ukrainian leader tweeted this afternoon that Ukraine “will become a member of the Alliance” — a juicy-sounding claim some interpreted to mean Ukraine would be joining the alliance immediately. If true, that claim would upend Wednesday’s Biden-Putin head-to-head summit. Instead, the alliance merely reiterated a 2008 commitment that Ukraine will one day become a member, and President Joe Biden later confirmed — at a press conference held two hours behind schedule — that Ukraine did not yet meet NATO membership criteria.

In the summit communique, NATO members stopped short of labeling China a threat, but did little else to conceal their concerns, referencing “systemic competition from assertive and authoritarian powers.” The allies criticized Russia directly, saying it has “intensified its hybrid actions against NATO Allies and partners, including through proxies.”

Italian Prime Minister Mario Draghi kept up the anti-Trump tone of the European leaders. Draghi stressed that “President Biden’s first visit is to Europe” and asked journalists to “try to remember where President Trump’s first visit was.” The answer: Saudi Arabia.

As NATO finalized its cyber defense plans, Secretary General Jens Stoltenberg said the alliance will ready itself to respond jointly to any attacks against members in space.

There’s a lot more on China in today’s communique compared to 2019 — it’s definitely a shift. There’s also a lot of concern about Turkey and their purchase of Russian military equipment.

Macron was forced to follow Biden’s lead on the NATO pivot to China, even while publicly saying, “NATO is a North Atlantic organization, China has nothing to do with the North Atlantic.” So, there’s a lot of personal love between Macron and Biden, but some battles, too.

There’s split between the European positions and U.S. line on China. Boris Johnson said he doesn’t want to start a new Cold War on China, even as he is under huge pressure to take a tougher line from the hawkish wing of his own Conservative party. It’ll be fascinating to see if Biden succeeds in getting the U.K. to take a tougher line.

Angela Merkel added her weight to the dove side of the argument. “I think it is very important, similar to what we are doing with Russia, to always offer a political discussion, a political discourse, in order to find solutions,” when it comes to China, she said.

Has this summit given Biden a boost going into his Putin head-to-head?

Yes. The communique leads with NATO’s commitment to unity. NATO allies also rubber-stamped the G-7 communique from the weekend, meaning there’s literal alignment between the two groupings as they get more organized in pushing back on autocrats. That’s all Biden could wish for.

Sure. Anytime you can get your allies on board with most of your priorities, even if it’s rhetoric for now, you’ve strengthened your relations with an adversary. But I have to wonder a couple things: First, what if Trump (or someone like Trump) runs and wins in 2024? What do these NATO allies falling over to praise Biden do then? Second, Putin intends to stay in office past Biden and these other NATO leaders. How does that affect his calculus?

Momtaz: Absolutely, yes, Biden did get that boost. It’s really very interesting the new ways G-7 and NATO are overlapping. Today the NATO allies even agreed to keep their military carbon emissions under control, which is a direct overlap between the G-7 prioritizing climate and today’s defense focus.

Biden has rock solid support from the Baltics, which is no surprise. After leaders from Estonia, Latvia and Lithuania met with Biden, Lithuanian President Gitanas Nausėda tweeted: “During turbulent times, democracies must stick together,” adding that NATO members “agreed to strengthen” NATO’s presence on the alliance’s eastern flank, as well as its support for Ukraine and Georgia. “U.S. presence in the Baltics is crucial for the security of the whole alliance,” he said.

What happened regarding national defense and NATO funding?

Primer on how NATO financing works

Today’s summit is a giant payday for Stoltenberg and the entire team that works here at NATO headquarters. Leaders are committing to increasing all three strands of the alliance’s common funding, i.e. the portion of the budget that goes to central operations, which is roughly $2.5 billion a year today. That’s only 0.3 percent of total allied defense spending, and it was not a given that the budget would be increased. Support from Biden made a critical difference.

Momtaz: France is back in the NATO central command system, but was really unhappy about the NATO common spending proposal by Stoltenberg. France had to concede the point, so Stoltenberg got what he wanted. French Defense Minister Florence Parly told me France’s worry isn’t the idea per se, it’s that NATO isn’t able to tell Paris what they will spend the money on.

Tobias Ellwood, chair of the U.K. Parliament’s Defense Committee, is proposing the U.K. bump its defense spending up from 2.29 percent to 3 percent of GDP — well beyond the famous 2 percent target most NATO members still fail to reach.

NATO leaders committed to continue to provide training and financial support to the Afghan security forces. The announcement ends speculation over what will happen to the NATO training mission in Afghanistan once U.S. and NATO forces leave the country by September. Pentagon officials have said the United States will end its own training program after the withdrawal, although Washington will continue funding the Afghan forces.

Anything noteworthy in the side meetings and events?

Heath: Turkey’s President Recep Tayyip Erdoğan was at pains to downplay tensions between Ankara and its NATO allies today. He called his talk with Biden “fruitful and sincere,” despite significant differences of opinion, and invited Biden to Turkey. Important to note here that Turkey hasn’t changed its position on buying Russian S-400 surface-to-air missile systems, which had been a major concern for NATO allies. After speaking with Greek Prime Minister Kyriakos Mitsotakis, Erdoğan said he is looking to calm relations between the two countries and “will support a positive agenda” following a period of surging tension. Angela Merkel favors rewarding more cooperative behavior from Ankara in the eastern Mediterranean with benefits such as a modernization of the EU-Turkey customs union.

Dickson: Boris Johnson once again couldn’t escape Brexit. The protocol for handling the Northern Ireland border was on the agenda for Johnson’s meeting with Spanish PM Pedro Sánchez.

Momtaz: Speaking of Brexit, Emmanuel Macron clarified his Brexit comments from the G-7 summit, assuring that he would never question U.K. sovereignty over its territory.

Thanks for joining us for the NATO summit — tomorrow we move onto the EU-U.S. summit.