Freshman Rep. Marjorie Taylor Greene apologized Monday for comparing vaccine and mask requirements to the Holocaust in a bid to defuse the ongoing controversy over her latest incendiary remarks.

Speaking at a brief news conference outside the Capitol, the Georgia Republican acknowledged that her past comments about Jewish people and Nazi Germany were “offensive” and “hurtful,” adding that she is “truly sorry” and wants to “own” her mistakes.

Greene initially refused to back down, despite facing backlash last month from both parties for her inflammatory remarks. Instead, she doubled down and tweeted: “Vaccinated employees get a vaccination logo just like the Nazi’s forced Jewish people to wear a gold star.”

When asked Monday why she didn’t show contrition sooner, Greene blamed the House’s three-week recess and dismissed the notion that her apology came because Democrats are now pursuing possible disciplinary action.

Greene described her museum visit was a good reminder of the atrocities of the Holocaust, though she added that she has always been aware of the horrors of that genocide and visited the Auschwitz concentration camp at the age of 19. She also declined Monday to disavow other comments she made comparing Democrats to the National Socialist Party.

Greene’s public apology tour comes as one Jewish House Democrat, Illinois Rep. Brad Schneider, prepares to introduce a censure resolution condemning Greene’s latest comments on the Holocaust. Some Democrats are already privately discussing censure as a potential response to a group of Republican lawmakers pushing a censure resolution against one of their caucus members, Rep. Ilhan Omar (D-Minn.), for her recent remarks on Israel.

Neither party’s leaders have determined their next move on the floor on this matter. But the prospect of a tit-for-tat illustrated that both parties are continuing to grapple with how to respond to incendiary rhetoric in their ranks, with Democratic and GOP leaders alike eager to preserve unity among their own while talking up the discord across the aisle. Greene’s attempt to show remorse could help take some of the heat off her own party as the GOP prepares to go after Omar.

GOP leaders have condemned Greene for her remarks about the Holocaust but stopped short of calling for any disciplinary action. House Minority Leader Kevin McCarthy also defended Greene when Democrats kicked her off her committees earlier this year for calling some of the nation’s deadliest school shootings a hoax and endorsing social media posts that called for violence against top Democrats.

Greene also did not use her Monday apology to address remarks she made last year baselessly slamming liberal philanthropist and Holocaust survivor George Soros as “a piece of crap that turned in his own people over to the Nazis.”

House Democrats, however, say they could once again target Greene on the floor — particularly if GOP leaders force a vote condemning Omar’s comments. Greene’s museum visit was first reported by Punchbowl News. 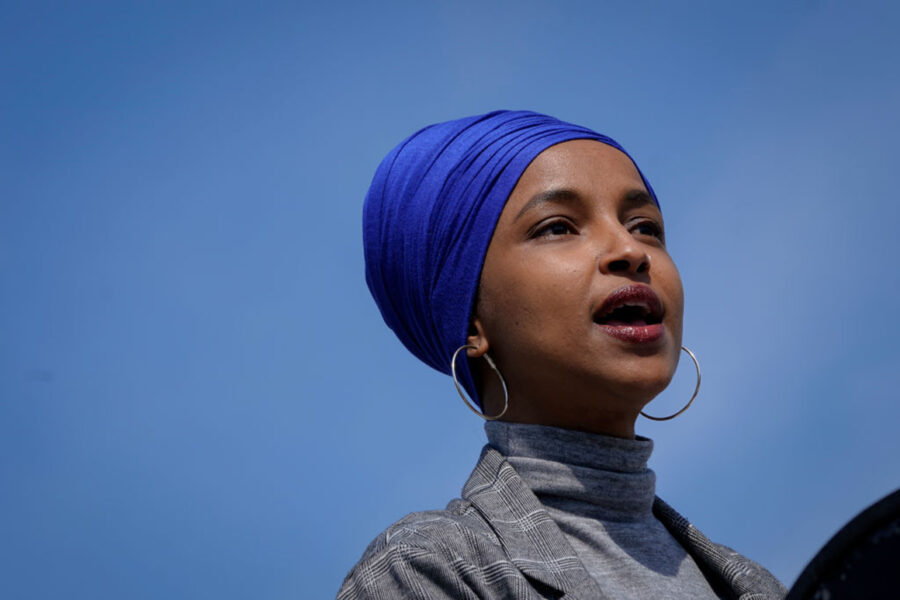 Democrats are clear that they do not equate Greene’s long history of inflammatory comments to what Omar recently said about an International Criminal Court probe of war crimes allegations against both the Taliban and the U.S. in Afghanistan and by Hamas and Israel.

Still, both members have become lightning rods in their own party in separate ways, with months of simmering tensions among their own colleagues that their opponents have each tried to exploit in a House where Democrats hold a razor-thin majority.

GOP leaders haven’t yet decided whether to force a vote on the floor to boot Omar from the the House Foreign Affairs Committee or to censure her, but they are eager to keep the spotlight on Democrats’ intraparty divisions. The topic was discussed at a GOP leadership meeting Monday afternoon, according to sources who were present, and is expected to come up again during a wider Republican conference meeting on Tuesday morning.

Democrats say few of their members would be likely to vote for either of those anti-Omar GOP resolutions on the floor, even among the 12 Democrats who called her out by name in a dramatic statement last week, according to several sources with the discussions. They say the Minnesota Democrat’s clarification was a good faith attempt to move beyond the controversy.

Meanwhile, another group of Republicans has floated a censure resolution that would condemn not just Omar, but other members of the liberal group known as ‘the Squad’: Reps. Alexandria Ocasio-Cortez (D-N.Y.), Ayanna Pressley (D-Mass.) and Rashida Tlaib (D-Mich.). But privately several Democrats dismissed the effort, calling it more of a GOP messaging stunt than an attempt to actually win over Democratic votes.