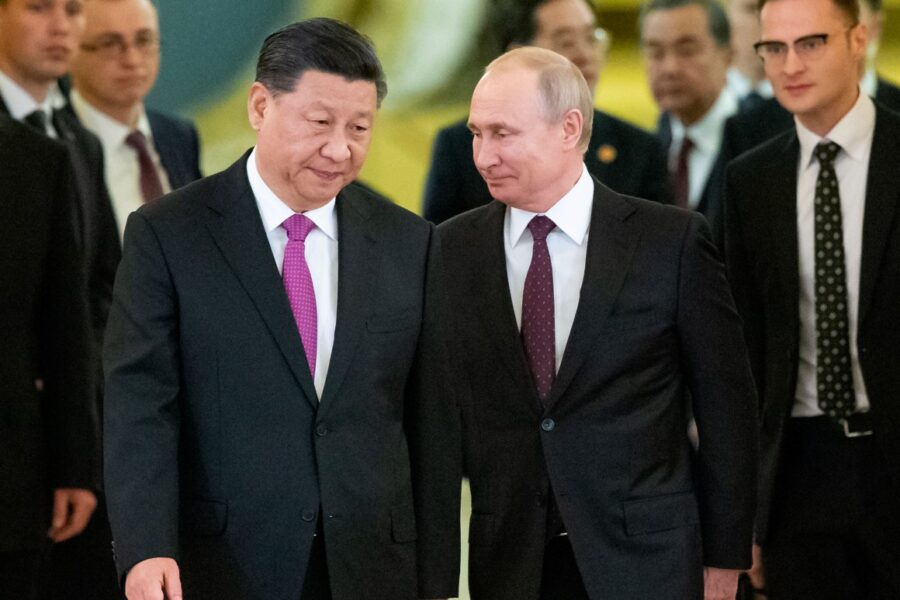 Earlier this month, Russian and Chinese officials celebrated an anniversary — while offering up a veiled challenge to the United States.

Twenty years after signing the “Treaty of Good-Neighborliness, Friendship and Cooperation,” the Chinese-Russian relationship has achieved new heights and is poised to reach a “larger scale, broader field, and deeper level,” Chinese Foreign Minister Wang Yi said in a video message to a think tank forum, according to a readout from the Chinese Foreign Ministry.

In his video speech to the forum, Russian Foreign Minister Sergey Lavrov declared, according to a Russian readout, that “Moscow and Beijing are consistent supporters of the formation of a more just, democratic and therefore stable polycentric system of world order.”

Hyperbole? To some degree, yes. Hypocrisy? On some fronts, for sure. But to the Biden administration, such lovey-dovey rhetoric between Moscow and Beijing cannot be ignored.

In fact, U.S. wariness over the Russia-China relationship has grown to the point where high-level American strategists are weighing how to factor it in as they try to orient U.S. foreign policy to focus more on a rising China. President Joe Biden is expected to discuss Moscow’s ties to Beijing during his Wednesday meeting with Russian leader Vladimir Putin, whom China’s leader, Xi Jinping, has called his “best friend.”

For many years, the relationship between China and Russia appeared to be limited to tactical cooperation or temporary partnerships of convenience, a senior Biden administration official told POLITICO in an interview. More recently, however, it seems to be transforming into something more sustained and strategic.

“What we’ve seen over the course of the last decade is something much deeper and, frankly, more concerning,” the senior official said. “I think you’d have to say that on some level that this operates as almost a quasi-alliance.”

Biden has been briefed on the topic of Chinese-Russian relations and has delved into intelligence about it, the senior official said. The issue also was the topic of a briefing specifically requested by Secretary of State Antony Blinken, a State Department official confirmed. 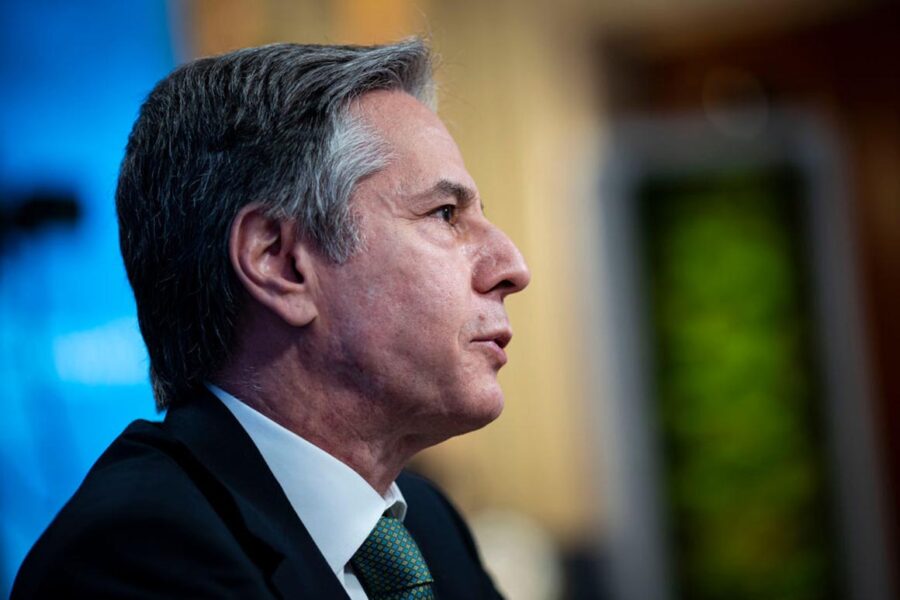 But at this early stage in Biden’s tenure, with many key positions unfilled, the administration still needs to work out the best mechanisms to monitor the Beijing-Moscow dynamic, the senior official said.

“It’s going to be incumbent on us to sort of rethink our overall strategy,” the senior official said. “Do you contain and deeply, negatively engage both? Do you try to differentiate in your approach to try to improve relations with Moscow? These are all incredibly difficult things.”

The Moscow-Beijing relationship has had many ups and downs. What was then the Soviet Union quickly recognized the People’s Republic of China upon its establishment in October 1949. In the 1950s, the two countries had economic ties and gave military support to North Korea in its war with U.S.-backed South Korea.

But relations cooled considerably in the 1960s as the two fought for dominance in the communist sphere, with Soviet and Chinese troops even clashing along their shared border. In 1980, China joined the boycott of the Moscow Olympics. By the end of that decade, however, the two had agreed to normalize relations.

In more recent years, China and Russia have often worked in tandem on the diplomatic front, especially at multilateral institutions like the United Nations. The countries typically follow each other’s lead on issues of import to the other. On Syria policy, for example, China often sides with Russia, which has troops in the war-torn Middle Eastern country.

Bilateral trade between the two countries is on the rise, having crossed the $100 billion mark. Moscow and Beijing want to double that by 2024.

Perhaps most striking and of greatest concern to the United States is what appears to be increasing military and technological cooperation between Russia and China.

Asked for examples, the senior Biden administration official ticked off several: “Advanced fighter airplanes, hypersonic technologies, very effective radars … battle integration systems that link different services more effectively, nuclear propulsion with respect to submarines, night vision — I mean, I could go on and on. Those are all areas that Russia and China have worked closely on together.”

Analysts Andrea Kendall-Taylor and David Shullman recently pointed out in Foreign Affairs that Russia and China have been conducting joint military exercises “of increasing frequency and complexity.” The countries’ technological cooperation, they wrote, “might eventually allow them to innovate faster together than the United States can on its own.”

Other analysts have also tried to draw the Biden administration’s attention to the Moscow-Beijing connection.

“As they draw closer economically, technologically, militarily and diplomatically, and their cooperation in each of these spheres crosses new thresholds, their combined weight in East Asia and across Central Eurasia swells the challenge far beyond that posed by either alone,” Thomas Graham and Robert Legvold wrote in POLITICO Magazine earlier this year.

Some former U.S. officials warn against overhyping China-Russia ties. They note, for instance, that the two still do not cooperate seamlessly, and that there’s plenty of distrust.

Russia has in recent years accused China of stealing its military technology. Moscow also is suspicious of Beijing’s intentions when it comes to energy and other initiatives in the Arctic circle. The two also could find themselves at odds over India. Russia, a major arms supplier to India, has generally had solid relations with New Delhi. China’s relations with India are tense, with the two countries engaging in border skirmishes as recently as this year.

There’s also the likelihood of Russia feeling increasingly like the junior partner in its relationship with China, and getting resentful. That’s especially the case as China expands its economic ties to countries in Central Asia and beyond, places Russia has long considered its turf.

When it comes to Russia’s economic relationship with China, the latter is far more dominant and dynamic. China is Russia’s top trading partner, but Russia doesn’t even crack Beijing’s top 10 trading partners. China also is simply a much bigger player in global trade overall: the value of its exports to the United States alone is bigger than the value of Russia’s exports to the whole world.

“I don’t think we should invest a lot of time in trying to erode [the relationship],” said David Stilwell, who served as assistant secretary of State for East Asian affairs under former President Donald Trump. “That will happen on its own as Beijing intrudes into Moscow’s spheres of influence.”

Putin is well aware of the imbalance of power Russia faces with China. Some analysts even wonder if recent Russian actions, such as increasing its troop presence along the border with Ukraine, is meant to remind the United States that Russia can’t be ignored, even as Biden has made it clear his top geopolitical concern is China.

“Really, no country has played a weak hand more effectively than Putin has, just across the board,” the senior Biden administration official said.

The senior official added that any U.S. attempt to capitalize on divisions between Moscow and Beijing has to be extremely subtle and careful. America’s relationship with both countries already is fraught enough.

“Both sides are highly attentive to efforts to create tension or to split them, and they are very focused on what I think both perceive is the larger, menacing problem, and that is the United States,” the senior official said.

The Biden-Putin meeting is a key step toward exchanging views on China, though that will be one of many topics on the agenda. Biden has paid close attention to the issue in briefings with aides and has “a very nuanced understanding” of the Moscow-Beijing nexus, the senior official said.

That being said, it’s the type of dilemma that cannot be solved quickly, if at all, and requires some serious prioritization.

“We also face the situation that in the short term, the things that are really concerning at an immediate level often emanate from Russia,” the senior official said. “But it’s the long-term challenges of China that are most concerning.”