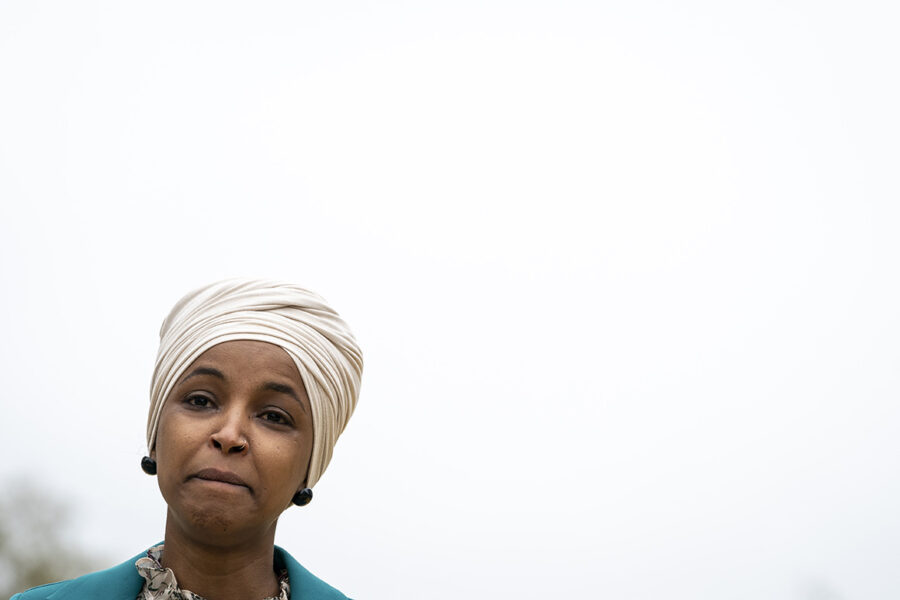 Republicans and Democrats in the House are locked in a game of chicken over punishing controversial members from the other party.

Rank-and-file members in both parties are threatening to formally censure lawmakers across the aisle who have become lightning rods for different reasons: Rep. Ilhan Omar (D-Minn.) on one side, Rep. Marjorie Taylor Greene (R-Ga.) on the other. Yet it’s still unclear who’s going to court a collision, if at all — a sign that lawmakers are nervous about the prospect of a tit-for-tat should they choose to go down that punitive route.

The fear of retaliation, especially with such tight margins in the House, is exactly why lawmakers have been cautious about pursuing censure or other similar punishment in the past.

Still, Republicans and Democrats alike are eager to exploit simmering tensions among their rivals. For the GOP, that means targeting Omar for equating the U.S. to terrorist groups when discussing war crimes and exposing her party’s broader fault lines over Israel. And for Democrats, that means hammering Greene for comparing Covid regulations to the Holocaust and painting the entire GOP as radical.

But Republicans have mixed feelings about how best to achieve their goal. Some are pushing for Omar to be censured or removed from the House Foreign Affairs Committee, including a few who voted to boot Greene from her committees earlier this year. One group of GOP members has floated a censure resolution that would condemn not just Omar, but other members of the liberal group known as “the Squad”: Reps. Alexandria Ocasio-Cortez (D-N.Y.), Ayanna Pressley (D-Mass.) and Rashida Tlaib (D-Mich.).

Many Republicans argue that Democrats already opened up Pandora’s Box by evicting Greene from two House panels earlier this year for inflammatory remarks she made before coming to Congress.

“If the standard in Congress is going to be that your word gets you removed from committees, it is very clear that her words should get [Omar] removed from Foreign Affairs,” said freshman Rep. Byron Donalds (R-Fla.). “If the Democrats don’t want to do this, then restore Marjorie to her committees.”

Still, others in the GOP fear taking action against Omar will only serve to unify and rally Democrats, rather than help facilitate their internal implosion. Instead, these Republicans — who finally feel like their party is in a good political position after months of headlines documenting their own bitter divisions — would rather just keep the spotlight on the escalating Democratic infighting.

House GOP leaders also gave a presentation Tuesday encouraging Republicans to focus their messaging attacks on the “Six Biden Crises”, according to a slide shown to POLITICO — another sign Republicans are eager to keep the heat on Democrats.

GOP leadership has also appeared to cool on the idea of pursuing floor action against Omar, one of the first two Muslim women elected to Congress. House Minority Leader Kevin McCarthy on Tuesday called on Speaker Nancy Pelosi to strip Omar of her committee assignment and promised to remove the Minnesota Democrat from the panel if Republicans regain control of the chamber next year.

But notably, McCarthy stopped short of a direct threat to force a floor vote in the coming days aimed at disciplining Omar for her rhetoric. He also didn’t commit to the idea during a private leadership meeting on Monday or a wider GOP conference meeting Tuesday morning, though Omar was discussed at both events.

Rep. Michael Waltz (R-Fla.), who is spearheading the Omar censure measure, acknowledged during Tuesday’s closed-door GOP meeting that his effort might not ever reach the floor but encouraged his colleagues to keep hitting Democrats over the issue, according to sources in the room.

“It’s not our problem. Police your own members,” said one GOP lawmaker. “By doing this, all you’re going to do is unify them on a vote. So we can just be in the background.”

“If we can have one week where House Republicans are not the issue, it’s a good week,” the lawmaker added, “because that means the lens is clearly on what the Democrats are doing.”

Still, Republicans are reserving the right to attack: House Minority Whip Steve Scalise (R-La.) said Tuesday that “all options” remain on the table.

Democrats, however, say Republicans are trying to weaponize Omar’s words in order to ease scrutiny of members in the GOP conference. While many in Omar’s party were alarmed that she equated war crimes committed by the U.S. and Israel to Hamas and Taliban, they’re also less compelled to take action after she sought to clarify that her remarks were about “specific incidents” related to International Criminal Court cases and not “a moral comparison between Hamas and the Taliban and the U.S. and Israel.”

Following her clarification, Democrats say few of their members would be likely to vote for either of the anti-Omar GOP resolutions. That lack of interest in further punishment exists even among the 12 Jewish Democrats who called her out by name in a dramatic statement last week, according to several people familiar with the discussions who described her response as a good-faith attempt to move beyond the controversy.

House Majority Leader Steny Hoyer said he will “certainly be urging” fellow Democrats not to sign onto any GOP resolution to condemn Omar — as well as encourage them not to introduce one against Greene.

“I am hopeful that we won’t spend our time going back and forth on these resolutions,” Hoyer told reporters, noting that both Omar and Greene have attempted to make amends for their recent comments, though he said the Georgia congresswoman’s remarks were “atrocious.”

Democrats also make clear that they do not equate Greene’s long history of inflammatory comments — including a comparison between her political opponents and the National Socialist Party that she declined to disavow Monday evening — to what Omar recently said. And they say they’ve done their best to put the Omar discussions behind them this week.

In a bid to defuse the escalating controversy, Pelosi’s leadership team released a statement last week condemning the comments while also thanking Omar for issuing the clarification. But the speaker took heat from some progressives for how she initially responded and attempted to project a more united front in a CNN interview on Sunday. Pelosi insisted then that “we did not rebuke” Omar and referred to her as “a valued member of our caucus.”

While Omar’s recent comments were viewed by her colleagues as a false equivalency rather than antisemitism, she came into the latest dust-up with the equivalent of two strikes: her colleagues formally condemned two sets of remarks she made in 2019 as antisemitic.

Republicans, meanwhile, are claiming that a lack of action is proof Pelosi and Democrats won’t punish their own. But they fear if they are the ones to pull the trigger in seeking to strip Omar of her committee assignment, Democrats will band together — and possibly fire off their own censure effort aimed at Greene or others.

Rep. Brad Schneider, a Jewish House Democrat from Illinois, plans to introduce a censure resolution on Wednesday condemning Greene’s Holocaust remarks — though it’s not guaranteed to get a floor vote. With that threat looming, Greene paid a private visit to the Holocaust museum on Monday and apologized for some of her past remarks.

Greene’s effort to show contrition could also help take some of the heat off her own party as the GOP weighs whether and how to go after Omar, though McCarthy said he had nothing to do with it: “Congresswoman Greene did this all on her own,” McCarthy told reporters Tuesday. “I thought it was appropriate.”

But Greene’s apology did little to quell Democrats’ outrage over her long history of incendiary rhetoric. In addition to her, Democrats have also previously expressed support for censuring Reps. Mo Brooks (R-Ala.) and Louie Gohmert (R-Texas) over their encouragement of the rally that turned into Jan. 6’s deadly Capitol riots. Democrats have yet to act on such measures, but they warned that if Republicans make a move against Omar and it doesn’t get tabled, Democrats will likely have a “greater appetite” to strike back.

“I think there’s a sense within the Democratic caucus that we’ve been very restrained in using tools such as censure and expulsion from committees to deal with members that even many of our Republican colleagues privately tell us are bat-shit crazy and dangerous,” said one moderate House Democrat.

“This is weaponizing accusations of antisemitism for purely political ads by a party that was unwilling to do anything after members in its ranks supported a violent insurrection against the U.S. government,” the Democrat added.

Quint Forgey contributed to this report.