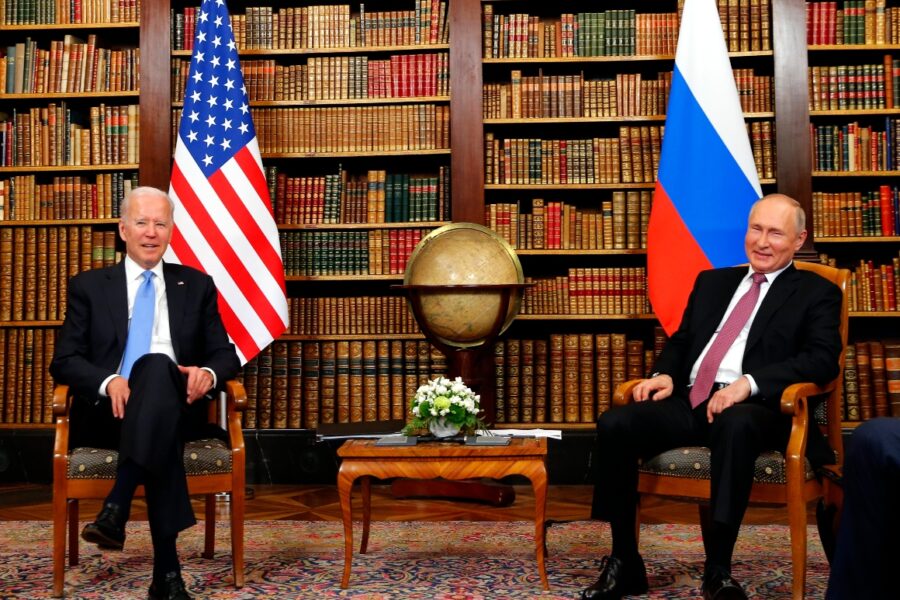 More than once on Wednesday, as President Joe Biden described his meeting with Vladimir Putin, he tried to make it sound like he was doing the Russian leader a favor by simply giving him some good advice.

America has significant cyber capabilities, Biden pointed out. Surely, Putin wouldn’t want to do anything on the cyber front to make his country the recipient of U.S. wrath. Does Putin really want to improve Russia’s trade status like he says? Maybe he shouldn’t detain American businesspeople. And what happens if Putin and his country keep interfering in the elections of other countries? “His credibility worldwide shrinks,” Biden said.

Of course, Biden’s message also could be read as a series of semi-veiled threats to the long-ruling Russian autocrat. Biden, however, insisted that while it was not a “kumbaya” meeting, there “were no threats” and that what he was saying wasn’t simply about what works best for America.

Whether Putin will follow Biden’s advice is far from clear, as is the true impact of Wednesday’s much-hyped summit between the two leaders. Both men used words like “constructive” and “positive” to describe the roughly four-hour gathering. But, as expected, little emerged from the talks — at least as far as was conveyed to the public — except agreements to keep talking about issues ranging from nuclear weapons to the war in Ukraine.

Still, that alone is a win, some analysts said, given the poor state and downward trajectory of the U.S.-Russian relationship.

“Biden set the bar appropriately low for this meeting, and the result — agreeing to talk about the hard but necessary issues of strategic stability, arms control, risk reduction — more than met that bar,” said Matthew Rojansky, director of the Wilson Center’s Kennan Institute. “The way the two presidents described the tone and tenor of their meeting suggests they did exactly what needed to be done, which was to clarify where there is potential for progress, where there is no such potential, and how each side sees things.”

The Biden-Putin meeting was held in Geneva, Switzerland, after Biden attended a series of summits with European allies in Britain and Belgium. Aides to the U.S. president had warned in advance not to expect any groundbreaking agreements. They stressed that, above all, it was a chance for Biden to tell Putin face-to-face what he wants from the relationship, and what Russia can expect if it crosses him.

The meeting began with hand shakes, brief smiles and poses for the cameras before the doors were closed for the private sessions. Afterward, Putin held a news conference first, followed by a separate one from Biden.

Biden said he’d given Putin a list of 16 entities — drawn from everything from the energy sector to water systems — that should be off limits to cyberattacks. Biden stressed that Putin needs to take action against cybercriminals on his soil who carry out such attacks, including the use of ransomware, even if the Kremlin had nothing to do with it. He indicated he hoped the two countries could come to some sort of cybersecurity arrangement.

“Responsible countries need to take action against criminals that conduct ransomware activities on their territory,” Biden said. “So we agreed to task experts in both our countries to work on specific understandings about what is off-limits and to follow-up on specific cases that originate in other countries, and that’s either of our countries.”

Biden said he’d discussed the recent ransomware attack on a major energy pipeline in the United States, whose culprits are suspected of ties to Russia, though not necessarily the government there.

“When I talked about the pipeline that ransomware hit in the United States, I looked at him and said, ‘How would you feel if ransomware took on the pipelines from your oil fields?’” Biden said of Putin. “He said ‘it would matter.’”

But when reporters pressed Putin on alleged Russian cyber campaigns against the United States, he largely deflected the questions, claiming that America was the world’s top source of cyberattacks. It was a typical Putin tactic, using “whataboutism” to deflect blame by pointing to others’ flaws.

Putin was also pushed on human rights in Russia, where he is accused of cracking down on political opponents. Russia’s most prominent opposition leader, Alexei Navalny, is currently in prison after having survived a poisoning alleged to be the work of the Kremlin.

Putin insisted he was simply holding accountable people who were breaking Russian laws. He said Navalny, whose name he would not utter, had “consciously ignored the requirements of the law” when he sought treatment for poisoning abroad. Putin did not mention Navalny had been in a coma when taken to Germany.

“The gentleman in question went abroad for treatment. His registration was not asked for,” Putin said. “As soon as he got to the hospital, he shared his videos on the internet, but he ignored the demands of the laws. And knowing about that, he came back to Russia. And so I take it that he wanted consciously to break the law.”

Putin also used the occasion to slam the United States for everything from the mistreatment of Black people to the continued operation of the Guantanamo Bay military prison. Putin further cast the charges being brought against the people who participated in the Jan. 6 Capitol insurrection as the U.S. persecuting people for their political beliefs.

Biden, meanwhile, played up Putin’s agreement to a “bilateral Strategic Stability Dialogue.” Those future discussions are intended to “lay the groundwork for future arms control and risk reduction measures,” according to a joint statement from Biden and Putin released by the White House. “Strategic stability” typically refers to nuclear arms control issues.

The U.S. president noted that it could be six months or more before there’s a sense on either side as to whether the discussions on strategic stability yield anything. He indicated the U.S. also would keep talking to Russia on other issues, including freeing detained Americans and the future security of war-torn Libya, Syria and Afghanistan.

Biden and Putin also agreed that their countries’ ambassadors, both of whom had returned home in recent weeks, would resume their posts in each other’s capitals, according to Putin. It was not clear exactly when the envoys would go back.

Biden spent significant time at the top of his appearance stressing his belief in the importance of protecting human rights, likely in response to Putin’s allegations during his news conference.

Asked about Putin’s mention of the Jan. 6 rioters, Biden dismissed the idea that there was any equivalence. “My response is what I communicated, and that’s a ridiculous comparison,” Biden said, arguing that the rioters damaged the Capitol and caused the death of a security official.

When asked what would happen if Navalny were to die in prison, Biden was blunt. “I made it clear to [Putin] that I believe the consequences of that would be devastating for Russia,” Biden said.

Those devastating consequences, Biden explained, would include an erosion of Russia’s reputation on the global stage as other nations realize that, whether through poisoning dissidents or other means, Moscow won’t abide by international norms.

“It’s about their ability to influence other nations in a positive way,” Biden said of Russia.

Biden noted that when it came to trade, “I don’t have any problem with doing business with Russia as long as we do it based on the international norms. It’s in our interest to see the Russian people do well economically.” But he alluded to the controversial case of Michael Calvey, an American investor whom Russia had put under house arrest, as the type of situation that damages Russia’s ability to engage in trade.

“American businessmen, they are not ready to show up,” Biden said. “They don’t want to hang around in Moscow.”

Putin had a different view on this, arguing that there’s tremendous interest from U.S. business leaders in Russia, but that U.S. sanctions on Russia were damaging Americans’ ability to do business there.

Earlier this year, when asked if he thought Putin was a “killer,” Biden agreed with that description. In his news conference, Putin said he was satisfied with an explanation Biden gave of what he had meant. When Biden was asked to share his side during his news conference, he declined.

“He’s satisfied,” Biden said of Putin. “Why would I bring it up again?”

Toward the end of his news conference, Biden grew exasperated by questions about how much confidence he had that Putin would listen to him and change his ways.

“I’m not confident he’s going to change his behavior. What the hell? What do you do all the time?” the president told one reporter. (He later apologized to the press pool for being “a wise guy.”)

Even as he described trying to convince Putin that it was in his own interest to take a different approach to Washington, Biden nonetheless stressed that he would never take Putin’s word for it.

Overall, Biden expressed confidence in his performance Wednesday. “I did what I came to do,” he said.