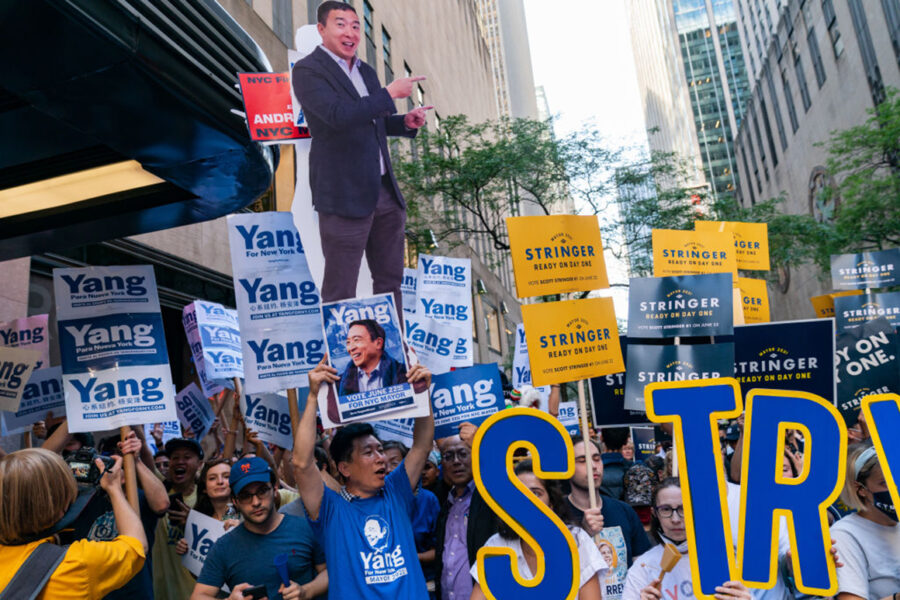 The first hour of the debate — sponsored by POLITICO, WNBC and Telemundo 47 — focused on public safety and the persistent homelessness crisis as New York City sees a dramatic spike in shootings and hate crimes throughout the city as it emerges from the pandemic.

Early voting is underway across the five boroughs, and more than 60,000 residents — in a city with 3.4 million active registered Democratic voters — have already cast ballots, leaving precious little time for candidates to vault ahead.

The debate is of heightened consequence with such a large field of candidates all trying to take advantage of a new ranked-choice voting system, which has left no clear frontrunner with just days before polls close. The candidates on Wednesday evening piled on, trying to get in every possible attack line. Just one breakout moment or flub could scramble the field.

The first spirited exchange of the night came from Andrew Yang and Eric Adams — two frontrunners whose path to victory heavily overlaps — as they argued over the Captains Endowment Association’s recent endorsement of Yang.

The two argued about whether Adams, a former New York Police Department officer, solicited the police captains group’s endorsement. Adams says he didn’t, and he said the group was opposed to him due to his reform activism while in uniform.

The back-and-forth was momentarily interrupted by Shaun Donovan, who tried to elevate the tenor of the debate — a tactic he returned to several times throughout the evening.

“New Yorkers didn’t tune in tonight to hear us fight with each other,” Donovan, a former Obama administration cabinet secretary, said, using a well-worn tactic of underdogs trying to get a word in.

Yang faced an attack himself when asked how he would tackle the rising number of people experiencing homelessness, exacerbated by mental health issues. Yang said that, among other things, he would bolster the number of beds dedicated to mental health in-patients, insisting, “I can fix this!”

Scott Stringer blasted Yang’s response as “the greatest non-answer of any debate” he’d heard and pressed Yang for an estimate of how much his proposal would cost.

“I can’t believe you’re fighting me on this,” an exasperated Yang shot back.

“This is a teaching moment” Stringer, the two-term city comptroller, said as he continued to query Yang. “We need specifics.”

Another spirited moment came when candidates were asked what they consider to be the worst idea proposed by their competitors. Several hammered Yang, while former mayoral counsel Maya Wiley knocked Adams’ policing strategy and Kathryn Garcia, a former city sanitation commissioner, lamented the “Defund the Police” movement.

But the most surprising moment involved Dianne Morales and Ray McGuire, who sparred over McGuire’s characterizations about Black and brown communities’ views on policing.

Morales, a former nonprofit executive who is the more left-leaning of the two, said McGuire’s characterizations were overly simplistic and not representative of the diverse views within those groups.

“How dare you presume to speak for Black and brown communities,” Morales, who is Afro-Latina, said.

“I just did,” said the former Citigroup executive, who is Black.

“I am a member of that community and you are certainly not speaking for me,” she said.

The debate’s second hour featured fewer bombs between candidates and a more eclectic set of questioning, including how long each candidate slept nightly and what was something each of them would ban in the five boroughs.

At other points, candidates seemed to be tripped up by rapid-fire, raise-your-hand sections, sometimes qualifying their answers or asking for clarification from the moderators.

The most noticeable example was when several candidates declined to raise their hands in support of banning natural gas hookups in new or renovated buildings, despite previously vowing to do so as part of a broader climate pledge.

Stringer was the only one of the eight to do so during the segment, though Yang, Wiley, Morales and Donovan had also signed a climate pledge committing to ban gas hook ups in new developments and major renovations. Several cities in California have taken such steps.