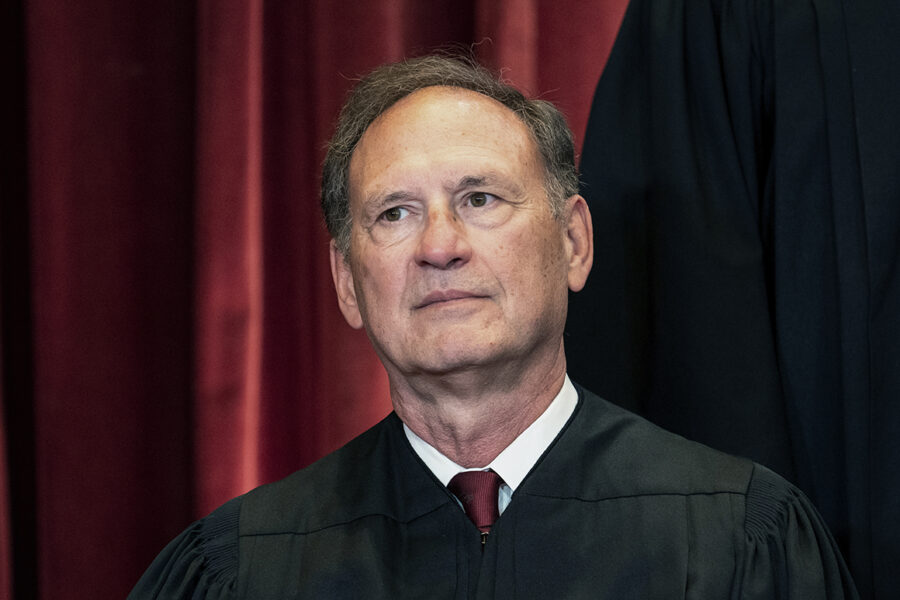 The key fault line in the Supreme Court that Donald Trump built is not the ideological clash between right and left — it’s the increasingly acrimonious conflict within the court’s now-dominant conservative wing.

Those rifts burst wide open on Thursday with two of the highest-profile decisions of the court’s current term. In both the big cases — involving Obamacare and a Catholic group refusing to vet same-sex couples as foster parents in Philadelphia — conservative justices unleashed sharp attacks that seemed aimed at their fellow GOP appointees for failing to grapple with the core issues the cases presented.

Some liberal legal commentators noted that the most carefully dissected rhetorical sparring is now taking place among members of the new six-justice conservative majority, with the three remaining liberal justices often left as mere spectators.

“We’re arguing about the battles among the conservatives and when that coalition breaks and where it goes,” lamented Harvard Law School lecturer Nancy Gertner, a former federal judge. “It’s a dramatic difference from only two or three years ago.”

Leading the charge from the right in both cases Thursday was Justice Samuel Alito, who penned caustic opinions taking his colleagues to task for issuing narrow rulings that seemed to him to be aimed at defusing political tensions rather than interpreting the law.

“After receiving more than 2,500 pages of briefing and after more than a half-year of post-argument cogitation, the Court has emitted a wisp of a decision that leaves religious liberty in a confused and vulnerable state. Those who count on this Court to stand up for the First Amendment have every right to be disappointed—as am I,” Alito wrote in the foster-care case, notwithstanding the Catholic charity’s unanimous victory.

In the Obamacare dispute, Alito sarcastically accused the majority of repeatedly indulging in flights of legal sophistry to avoid the politically unpalatable step of striking down the landmark health care law.

“No one can fail to be impressed by the lengths to which this Court has been willing to go to defend the ACA against all threats,” Alito wrote. “A penalty is a tax. The United States is a State. And 18 States who bear costly burdens under the ACA cannot even get a foot in the door to raise a constitutional challenge. Fans of judicial inventiveness will applaud once again. But I must respectfully dissent.”

While Alito observed the court’s traditional decorum by railing at “the majority,” there was little doubt his criticism was aimed primarily at Chief Justice John Roberts, who provided the pivotal vote to uphold Obamacare nine years ago and voted Thursday to leave the law intact by concluding that the Republican-led states seeking to overturn it lacked legal standing to sue.

In the latest Obamacare case, the chief justice left authorship of the majority opinion to the court’s second-longest-serving justice, Stephen Breyer, but the result was vintage Roberts: a largely-technical, 7-2 decision finding a lack of standing for the states and individuals challenging the law, while pushing aside more fundamental questions about the law’s constitutionality.

Roberts was the author of the opinion the court issued Thursday finding very narrow grounds to strike down Philadelphia’s ban on Catholic Social Services due to its policy against vetting same-sex couples for foster care.

Alito complained that Roberts’ reading of the Philadelphia ordinance and a similar state law was so Talmudic that it meant nothing in other cases and could quickly be evaded by the city through minor changes.

“This decision might as well be written on the dissolving paper sold in magic shops,” Alito wrote derisively.

Despite the obviously tense Alito-Roberts dynamic, what unfolded Thursday at the court was not simply a one-on-one grudge match. It was more like a tag-team wrestling event, with Justice Neil Gorsuch repeating much of Alito’s criticism and the court’s newest conservative justices — Amy Coney Barrett and Brett Kavanaugh — coming to Roberts’ defense.

“Perhaps our colleagues believe today’s circuitous path will at least steer the Court around the controversial subject matter and avoid ‘picking a side,” Gorsuch wrote in the foster-care case, in an opinion joined by Alito and Justice Clarence Thomas. “Dodging the question today guarantees it will recur tomorrow. These cases will keep coming until the Court musters the fortitude to supply an answer. Respectfully, it should have done so today.”

Roberts seemed intent on not taking the bait. His majority decision made only a single, passing reference to Alito’s hulking dissent and chose to focus more on Gorsuch’s, which the chief curiously called “the concurrence.”

Roberts said the way the anti-discrimination ordinance and policy applied left the case open to resolution on that basis and meant the court had “no occasion” to use the case to reconsider a 21-year-old precedent that Alito views as hostile to religious freedom.

Barrett chimed in to say that while she agreed with Alito that the precedent is flawed, there was “no reason” to overrule it now. Kavanaugh seconded that view, also throwing in with the chief on the point.

Will the split among conservatives persist?

It’s not yet clear whether the internecine fighting among the high court’s conservatives has any long-term impact in other cases. The cases the court took this term are generally considered to be middling in significance, but the justices have accepted an abortion case to be heard in the fall that could upend or cut back the constitutional right to abortion the court found in the landmark 1973 case, Roe v. Wade.

Still, some scholars doubt that precedent is truly in jeopardy and insist that the tendency of justices like Kavanaugh and Barrett to side with Roberts in some contentious cases undermines the idea of a six-justice conservative majority.

“I think you have a three-three-three court,” said South Texas College of Law Professor Josh Blackman. “I disagree with the notion that we have a six-member conservative majority on many of these divisive issues.”

Some analysts suspect the vocal public tiff the conservatives aired Thursday may be, in part, due to gripes about horse-trading done by Breyer.

The unusual length and painstaking detail in Alito’s opinion in the Philadelphia case made some courtwatchers wonder if it might have been drafted as a majority opinion, but later lost that status due to a shift from the court’s initial vote. A similar scenario played out in the Obamacare case back in 2012, according to reports from CBS News and elsewhere.

Alito’s lament Thursday about more than six months of “post-argument cogitation” in the same-sex foster case dispute also fuels suspicion that something more than the routine exchange of opinions went on.

“Alito’s 77-page Fulton concurrence has me thinking that Roberts did actually assign him the original majority decision and himself the Obamacare decision until Breyer engineered a bipartisan coup in Fulton that Roberts took for himself while reassigning Obamacare to Breyer,” Mike Sacks, an attorney and legal reporter for WNYW-TV in New York, wrote on Twitter.

Blackman said he, too, thinks something unusual played out in the foster-care case.

“I got that vibe,” the professor said. “I think Alito was just pissed. He was frustrated.”