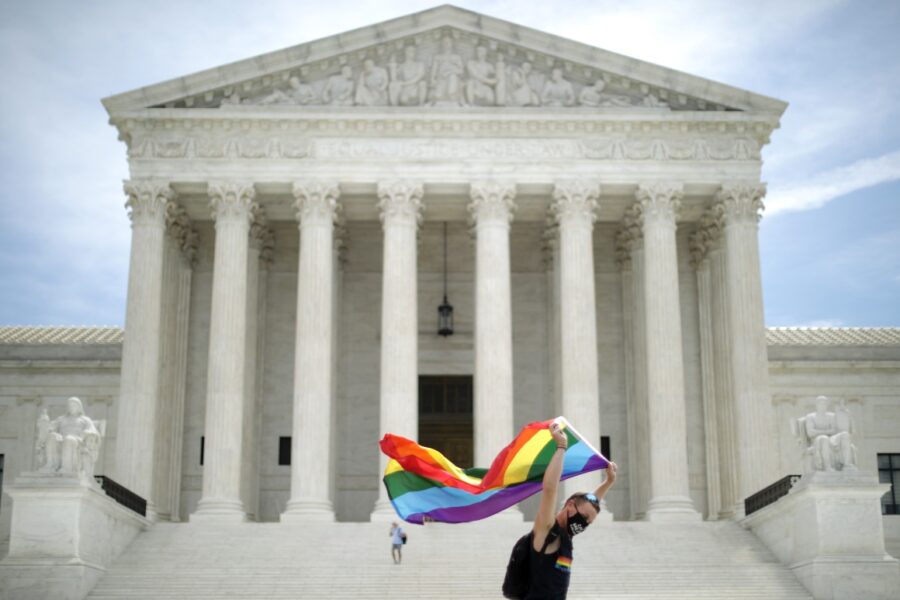 The Supreme Court has ruled that Philadelphia cannot exclude a Catholic organization from its foster care program because the group won’t work with same-sex couples.

The decision handed down Thursday was being closely watched by LGBTQ advocates who feared the ruling could make it easier for private organizations or individuals providing government-funded services to refuse to serve certain clients based on religious tenets.

The high court’s ruling in the Philadelphia case rested on narrow grounds that may not have directly moved the law in that direction. However, the headcount of the justices seen in the court’s four opinions indicated that they are prepared to demand more accommodation of religious views, although they do not yet agree on exactly how to do so.

The ultimate decision in the Catholic Social Services case was unanimous. Writing for a six-justice majority, Chief Justice John Roberts narrowly interpreted Philadelphia’s anti-discrimination ordinance and found it did not cover the work the Catholic Church’s charitable offshoot does certifying foster parents. He said such work does not amount to the kind of “public accommodation” that cannot discriminate on the basis of race, religion or sexual orientation.

“Certification as a foster parent…is not readily accessible to the public. It involves a customized and selective assessment that bears little resemblance to staying in a hotel, eating at a restaurant, or riding a bus,” Roberts wrote.

The court’s three liberals and two of Roberts’ conservative colleagues, Justices Brett Kavanaugh and Amy Coney Barrett, went along with that analysis.

However, the court’s three other conservative justices complained bitterly that the majority’s reasoning was tortured and amounted to dodging the main issue in the case: when government can burden the religious views of those through whom it provides services.

“This decision might as well be written on the dissolving paper sold in magic shops,” Justice Samuel Alito scoffed in a concurrence joined by Justices Neil Gorsuch and Clarence Thomas. “The City has been adamant about pressuring CSS to give in, and if the City wants to get around today’s decision, it can simply eliminate the never-used exemption power. If it does that, then, voila, today’s decision will vanish—and the parties will be back where they started….What is the point of going around in this circle?”

Alito, Gorsuch and Thomas also excoriated their colleagues for failing to issue a more sweeping decision overturning a two-decade-old precedent that the Constitution allows the government to enforce broad-based rules even if they severely impinge on religious beliefs.

With all nine justices in agreement that the Catholic group deserved an exemption from the Philadelphia non-discrimination policy, the central drama in Thursday’s ruling was a rancorous dispute about the court’s decision not to overturn a 1990 decision widely criticized by conservatives and religious freedom advocates, Employment Division v. Smith. In that ruling, the court held that generally applicable laws are not unconstitutional simply because they impact on religious belief or practice.

While Roberts disposed of the Philadelphia case with 15 pages, Alito penned a 77-page jeremiad, largely directed at dismantling Smith.

“After receiving more than 2,500 pages of briefing and after more than a half-year of post-argument cogitation, the Court has emitted a wisp of a decision that leaves religious liberty in a confused and vulnerable state. Those who count on this Court to stand up for the First Amendment have every right to be disappointed—as am I,” Alito wrote.

“Given all the maneuvering, it’s hard not to wonder if the majority is so anxious to say nothing about Smith’s fate that it is willing to say pretty much anything about municipal law and the parties’ briefs,” Gorsuch added. “Not a single Justice has lifted a pen to defend the [Smith] decision. So what are we waiting for?”

The opinions and the vote count indicate that the court’s decision not to grapple directly with Smith was driven by Barrett and Kavanaugh, who accepted Roberts’ resolution of the Philadelphia case and said there was no need to address Smith directly now.

Barrett’s opinion Thursday said she disagrees with Smith, but that requiring governments to prove that they had a compelling need to infringe on religious belief or practice would present vexing questions.

“I am skeptical about swapping Smith’s categorical antidiscrimination approach for an equally categorical strict scrutiny regime,” Barrett wrote, joined by Kavanaugh. “There would be a number of issues to work through if Smith were overruled.”

In the case decided Thursday, the Catholic group contended its religious views keep it from certifying gay or lesbian couples to serve as foster parents. Lawyers for the city of Philadelphia said it requires all the foster care agencies it works with not to discriminate as part of their contract.

During arguments in the case in November, held on the morning after Election Day, some justices suggested the legal showdown was contrived because there was no evidence any gay or lesbian couple had sought to work with Catholic Social Services and was rebuffed. There were also many other organizations that would accept such applicants, conservative justices said.

But liberal justices warned that giving the Catholic group the green light to exclude gays could open the door to organizations that might refuse to deal with interracial couples or put restrictions on women.

A Justice Department attorney appointed by the Trump administration, Hashim Mooppan, told the high court that the public interest in banning racial discrimination is so “particularly unique and compelling” that it should override the preferences of religious groups. He said the government doesn’t have the same degree of interest in thwarting religious opposition to same-sex marriage.

Lawyers for the Catholic group also argued that because the city allows some consideration of marital status, disability and “familial status” in the foster care process, its anti-discrimination rules are not applied consistently enough to justify blocking religiously-affiliated social-service organizations from following their own beliefs.