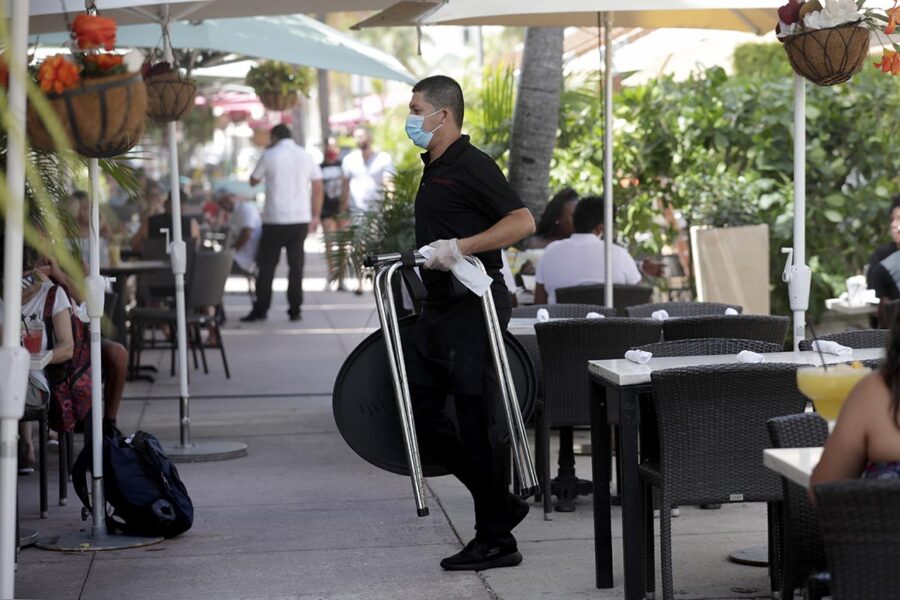 The U.S. economy is surging back from Covid-19, but restaurants, hotels and other industries hit hardest by the pandemic are telling Congress they still need tens of billions of dollars in new government funds to stay afloat.

The plea comes even after Congress appropriated more than $1 trillion over the past year to support smaller employers through forgivable loans and grants. The Paycheck Protection Program alone delivered nearly $800 billion in short-term aid to 11.8 million businesses during the pandemic, with economists divided on the extent to which it really saved jobs.

The lobbying effort is gaining traction, with Republicans signing on to bills to give grants to restaurants and gyms even as the GOP balks at President Joe Biden’s multitrillion-dollar infrastructure spending plans. Lawmakers from both parties are sympathetic to businesses that were forced to curtail operations, and they say that many didn’t get enough help from earlier aid programs.

“Most of the folks on my side of the aisle are not opposed to some additional funding,” said Rep. Blaine Luetkemeyer of Missouri, the lead Republican on the House Small Business Committee, who nonetheless opposes Biden’s spending plans.

Last week, a bipartisan group of lawmakers in the House and Senate introduced a bill that would devote $60 billion to a new round of grants for restaurants. The lead sponsors are Sens. Kyrsten Sinema (D-Ariz.) and Roger Wicker (R-Miss.) with Reps. Earl Blumenauer (D-Ore.) and Brian Fitzpatrick (R-Pa.).

Congress first established a Small Business Administration grant program in March with $28.6 billion — and it has since received $75 billion in applications, leaving tens of thousands of restaurants on the sidelines.

Replenishing the restaurant program has the backing of the Democratic chairs of the House and Senate Small Business Committees. Top Republicans are also open to the idea, though some like Luetkemeyer want to find a way to repurpose other federal funds that haven’t been used.

“They’ve been hit pretty hard,” Luetkemeyer said of restaurants. “They’ve been one of the last groups to get relief here.”

Though restaurant hiring is ramping up, the National Restaurant Association says the industry lost $290 billion in revenue during the pandemic and some areas still have capacity limits. Many restaurant owners are in debt and will soon owe back rent, advocates say.

“If people pay attention to what’s going on in their community, I think they’ll find there’s broad support for this,” Blumenauer said.

Small employers hold a special place in the hearts of lawmakers, as evidenced by the overwhelming support for the Paycheck Protection Program in its various iterations over the past year. Many are reaching out to their representatives once again to seek help.

Amy Long, co-founder of the Richardson, Texas-based Orchard at the Office, said her catering business has incurred hundreds of thousands of dollars of debt to stay alive during the pandemic. She has struggled to rehire workers because she’s unable to offer full-time hours like she did before Covid-19. She’s part of the Independent Restaurant Coalition that’s pushing Congress to pass the grant legislation.

“We cannot continue to operate at our current level of sales without additional help,” she said. “We won’t make it to September.”

John Lettieri, president and CEO of the Economic Innovation Group think tank, said he was skeptical of the need for new relief programs for employers at this stage of recovery. But Lettieri said restaurants had a “solid case” because the existing program “has been widely viewed as underfunded and unable to accommodate demand.”

At the same time, gym and hotel operators are lobbying for all-new grant programs. It’s unclear if they will get the same traction as restaurants.

Sens. Tammy Duckworth (D-Ill.) and Jerry Moran (R-Kan.) have proposed legislation that would authorize $30 billion for fitness facilities, which could receive grants of up to $25 million.

Sen. Brian Schatz (D-Hawaii) introduced a bill that would provide $20 billion in grants to support hotel worker payroll and benefits expenses. The legislation would require recipients to give laid-off employees recall rights so they can return to work and would claw back funds if operators didn’t follow the bill’s guidelines.

The hotel aid bill has the backing of not just the American Hotel & Lodging Association but also the hotel worker union UNITE HERE.

Chip Rogers, the president and CEO of the hotel trade group, said earlier versions of the proposal weren’t 100 percent for employees and included more assistance for the operators themselves. But Rogers said the group decided it would have a much greater chance of success by joining with the union and focusing on workers.

“Part of our job is to remind people that this industry could never survive on leisure travel alone even under the best-case scenario,” he said. “While you see people taking vacations, we recognize that until large meetings and conventions come back and until traditional business travel comes back that we’re not going to be able to fully recover. That’s why the help is needed.”

In May, a whole new lobbying alliance formed to convince Congress to pass more financial assistance for businesses. The Economic Bridge Coalition has since grown to 13 members, including the American Rental Association, the International Association of Amusement Parks and Attractions, the Professional Photographers Association and the American Horse Council.

“PPP was very helpful but the issue now is not so much relief but rebuilding,” said John McClelland, vice president of government affairs for the American Rental Association, which represents the equipment and event rental industry. “How do we get these businesses back and prosperous sooner rather than later?”

Lobbyists admit it will be a challenge to convince lawmakers to spend billions of dollars more on businesses that have survived the pandemic this long.

With a majority of adults fully vaccinated and safety restrictions easing, the biggest concerns about the economy are that it may overheat and that there are simply not enough workers and materials to go around.

The Federal Reserve on Wednesday signaled it could raise interest rates sooner than expected, indicating that the economy is rapidly expanding after the U.S. unemployment rate fell to 5.8 percent in May. Recent surveys by the National Federation of Independent Business found that small business optimism steadily increased for much of this year but paused in May as the labor shortage held back growth.

“The science shows that businesses can safely reopen thanks to widely available vaccines,” said Rep. Patrick McHenry of North Carolina, the top Republican on the House Financial Services Committee. “We should be focused on addressing the current issue facing employers: not enough workers applying to fill the positions that keep their businesses running.”

And even as Covid-19 restrictions have lifted recently, tens of billions of dollars in aid have continued to flow to businesses. There’s more left to be disbursed.

The SBA on Wednesday urged media outlets to get the word out that about $30 billion in disaster grants were still available for hard-hit businesses in low-income communities. The SBA is also struggling to distribute $16 billion in grants to live arts and entertainment venues, after encountering severe technical and operational difficulties that have derailed the program. The Shuttered Venue Operators Grant Program has only approved $531.4 million in aid despite receiving more than $11 billion in applications.

“I’ve heard this from members on both sides of the aisle,” McClelland said. “That `We spent a lot of money here, folks. We need to get on to something else.'”