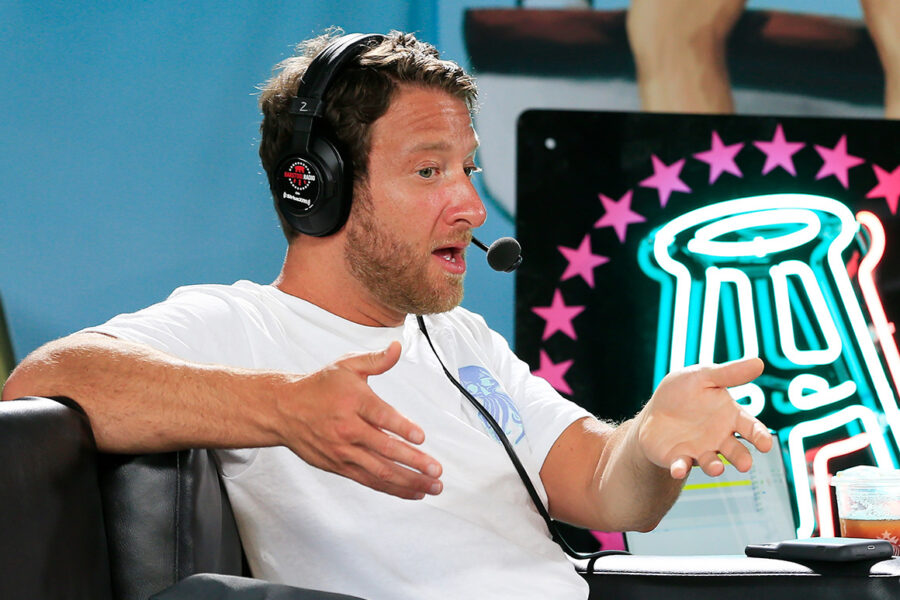 Earlier this year, when Echelon Insights released its way-too-early poll of voters’ preferences for the 2024 GOP presidential nomination, political wonks could be forgiven for having to Google the name at the bottom of the list next to Sen. Josh Hawley: somebody called “Portnoy,” polling at zero percent.

As founder of the self-consciously lowbrow Barstool Sports digital media empire, Dave Portnoy has, over the past decade, parlayed an outsized, aggressively macho social-media presence into a status as a right-leaning populist champion. He threatened — via Twitter, almost certainly illegally — to fire any Barstool employees who might attempt to unionize. He went viral with his impassioned rants against Covid-19 lockdowns. He feuded with Elon Musk on the behalf of meme-stocking, little-guy day traders. (He also heads an online outlet that has shamelessly stolen content and engaged in flagrant racism and misogyny, leading harassment campaigns against anyone who would dare call them out.)

Portnoy jokingly “announced” a presidential campaign on Twitter shortly after the poll’s release, but an actual run is highly unlikely. There’s no obvious reason to mount one: his presence in the poll is evidence enough of how the Republican Party has become the party of Barstool Sports.

A half-decade ago, the originally Boston-based site and its rabid fan community wouldn’t have scanned as “political” at all. But now, its proudly Neanderthal, reactionary ethos aligns perfectly with the side of our political binary that Trump reconfigured: the one whose common denominator is a tooth-and-nail, middle-finger unwillingness to accept liberal social norms.

If you looked at Portnoy circa 2010 — a budding bro-entrepreneur, popping champagne with models in cheesy photo shoots — you’d have to squint pretty hard to see a potential Republican standard-bearer. If you look now, it’s hard not to. It’s commonplace by now to observe that the Trump presidency “changed everything” for Republicans, from conventional wisdom on policy to how their internal politics are conducted. But first and foremost, it changed the face the party presented to the world. Where onetime nominees like Mitt Romney and John McCain tried and failed to subordinate cultural grievance to a more professionalized, inclusive style of politics, Trump succeeded by placing it right on the front of the tin. And when he casually dismantled that old fusion of free-market economic fervor and country-club traditionalism, Barstool was ready.

The rise of the “Barstool Republican,” to coin a phenotype, doesn’t necessarily explain Trump. It is, however, a useful way to understand what’s happened to American politics without constantly invoking the former president’s name. Portnoy’s devotees aren’t MAGA fanatics or Q fans who live to torment liberals, and they’re certainly not part of the GOP’s evangelical base. (One could imagine the last thing they’d want is a Supreme Court that strikes down Roe.) But the Barstool Republican now largely defines the Republican coalition because of his willingness to dispense with his party’s conventional policy wisdom on anything — the social safety net, drug laws, abortion access — as long as it means one thing: he doesn’t have to vote for some snooty Democrat, and, by proxy, the caste of lousy deans that props up the left’s politically-correct cultural regime.

The backlash to liberal domination of pop culture and the past decade’s transformation of speech norms created the Barstool Republican long before Portnoy’s name was bandied about in jest as a political candidate. And if you’ve been paying attention, their cultural revolution dates back to a time when such antics were more likely to get you kicked out of Mar-a-Lago than installed as its lifelong “El Presidente.”

Lost in the annals of a time when culture wars weren’t quite as central to our national politics is a nomenclature that now seems almost quaint: the so-called “South Park Republican.”

As far back as 2001, the gadfly conservative blogger Andrew Sullivan was using the term to describe members of his political tribe who shared the anti-P.C., socially libertarian views of “South Park” creators Matt Stone and Trey Parker. Stone and Parker, true to form, loudly protested their hatred of both major parties. Still, the label stuck, inspiring sparring New York Times columns and even a book-length exploration of the concept by conservative writer Brian C. Anderson.

In the political climate of the mid-2000s, the concept’s appeal was obvious: As Gen X-ers and younger Baby Boomers entered the ranks of the political elite, it made sense that they would dispense with the blue-blooded stuffiness and social conservatism of the Reagan-Bush imperium in favor of a vaguely countercultural, post-Sixties tolerance. W traded his father’s country-club affect for a pair of cowboy boots, but he wasn’t fooling anyone: The cultural energy in the Republican Party, to the extent that it had any, was in its feather-ruffling libertarian wing, whose influence would soon reach its zenith with the self-proclaimed Ron Paul Revolution. But like so many would-be revolutions, this one was denied — or at least delayed and mutated.

Paul’s 2012 bid to become the Republican Party’s presidential standard-bearer fizzled out in spectacular fashion, failing to convert internet hype into any meaningful primary support. Romney won the nomination and invited the youthful Wisconsin congressman Paul Ryan along for the ride (whose rad workout gear and politically inscrutable love of Rage Against the Machine, alas, failed to inspire a Romney-Ryan youth movement).

Crashing on the rocks of both Barack Obama’s megawatt cultural celebrity and the looming coronation of Jeb Bush as the post-“autopsy” face of the GOP, the Rude Republican cohort was at loose ends — until an unlikely salvation came in the form of a 6’3” reality show host and frequent Howard Stern guest descending his golden escalator into the first paragraph of 21st-century American history.

Trump was at first an uneasy fit for both the more culturally-sophisticated, libertarian-leaning members of the Republican coalition as well as their staid religious counterparts. But at the same time he was hotwiring Republican culture and pushing it to the limits of street-legality, anti-P.C. critics saw another revolution happening within liberal politics — and, by the transitive property, pop culture writ large. In their eyes, Hillary Clinton’s campaign represented the triumph of a pro-establishment cultural nanny state that rejected Obama’s attempted de-escalation of the culture wars in favor of a rigid new etiquette of social justice: A rainbow flag hoisted, in effect, over the Bushes’ Kennebunkport compound.

No points for guessing the author: Dave Portnoy, birthing the Barstool Republican with a single 200-word blog post. Trump transformed the political landscape by tapping into a powerful desire for freedom from criticism or censure — a desire that Portnoy shared, and which has only grown more intense and widespread as the panopticon of social media becomes the primary stage for not just national politics, but civic life at every level.

In a column this February for The Week, the Catholic social conservative writer Matthew Walther referred to “Barstool conservatives” as primarily sharing a “disdain for the language of liberal improvement, the hectoring, schoolmarmish attitude of Democratic politicians and their allies in the media, and, above all, the elevation of risk-aversion to the level of a first-order principle by our professional classes.” In other words: culture-war issues.

Oddly enough, despite the inherent thirst for conflict that it brings, the ascent of Barstool-ism within the Republican Party can be chalked up to ideological diversity within the GOP. What could unite free-market libertarians, revanchist Catholics, Southern evangelicals, and working-class Reagan Democrats but their shared hatred of… actual Democrats?

With that as the party’s guiding principle, and no clear policy agenda to speak of — the 2020 RNC literally did not have a new policy platform — those willing to trash the Democratic cultural regime most loudly and consistently are firmly in command, with more staid Republicans forced to at least provide cover, if not actively follow their cues.

They’re forced to defend freshman North Carolina Rep. Madison Cawthorn in the face of his attention-seeking tweets and allegations of sexual harassment from his (very recent) college days, while he ranks in the top 10 members of Congress in missed votes. They’re forced to defend Florida Rep. Matt Gaetz as he faces his own allegations of sexual impropriety — not to mention his frat-boy antics, like showing up to Congress in a gas mask in the earliest days of the coronavirus pandemic. They’re forced to defend Colorado Rep. Lauren Boebert as she fends off complaints from constituents about her “embarrassing” freshman term in Congress, after winning a primary and general election largely on the strength of her, well, bar ownership.

So just as anti-P.C., vaguely amoral Barstool-ism can be a strength, it can also be a weakness. In a media environment built to reinforce and intensify one’s ideological beliefs, being on the attack all the time can leave you in an exhausting state of constant defense. Yes, it can galvanize — nearly 75 million people voted to re-elect Donald Trump, the Stoolie-in-chief — but it can also exasperate and infuriate in turn — a record 81 million Americans voted for Trump’s purposely less-pugilistic opponent, Joe Biden. It also runs the risk of all novelty: that people might just bore of it. Yesterday’s provocation becomes today’s status quo, and in turn tomorrow’s epic cringe.

When Republican voters made Trump their presidential nominee in 2016, they chose gloves-off culture war over either Jeb Bush’s earnest compromise or the imitations of a careerist provocateur like Sen. Ted Cruz. Trump tapped into a very real dissatisfaction in the American electorate with the liberal status quo around speech and culture, and reaped both the attendant rewards and backlash. Someone like Dave Portnoy is, if not a viable presidential candidate, at least a credible successor to the role of the office’s last Republican occupant: Trump, Gaetz, Boebert, Cawthorn and their ilk all share Portnoy’s single-minded obsession with scoring headlines and affirming their constituents’ cultural identities at any cost.

In a media-obsessed world, it’s a powerful, intoxicating skill. And now that it’s proven a viable pathway to electoral success, Republicans are — perhaps wisely — clinging to it for dear life. As a creation of Judd Apatow, the 21st century’s great dorm-room comedy auteur, once said: “Pandora doesn’t go back in the box, he only comes out.”