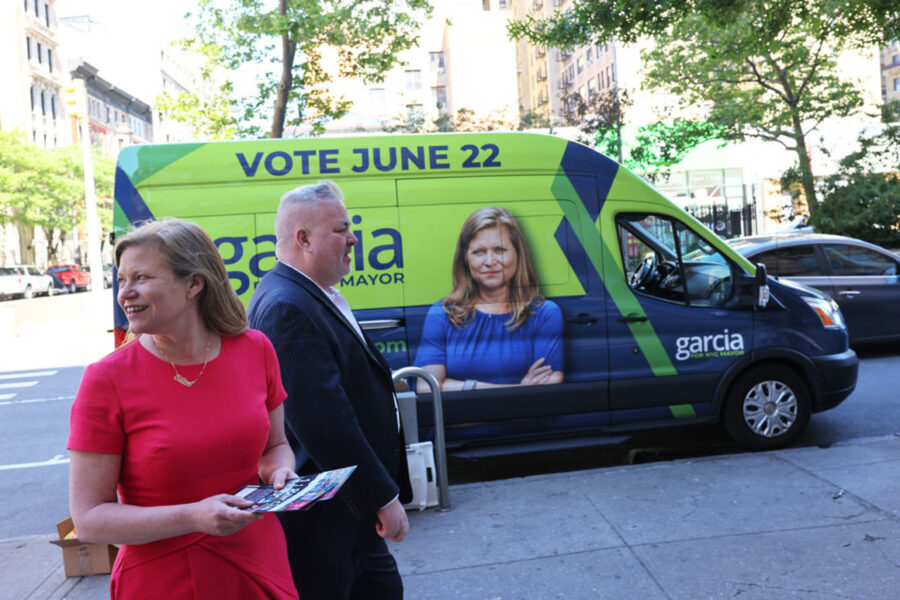 NEW YORK — “You need to cool off a bit before we talk,” New York city mayoral candidate Kathryn Garcia told me as we both sat in her giant air-conditioned van, recovering from a press conference in 90° F weather, regretting our clothing choices for the day.

Earlier, she and Andrew Yang had given a 20-minute press conference on a shadeless sidewalk in Lower Manhattan, explaining their surprising decision to campaign with each other — but without her giving an endorsement to Yang, as many political observers had theorized she would do. After chasing them throughout Queens that morning, and waiting for their joint Q&A with the press for a half hour later (and not drinking enough water and being ever so slightly shocked by their joint decision), I’d nearly passed out during the press conference under my linen blazer.

To only slightly exaggerate, the official Garcia van had just saved my ass.

An unusual sight zipping through the five boroughs this campaign season, the green and blue campaign van served as convenient transportation, a storage unit on wheels, a mobile office with a Wi-Fi hotspot, a portable A/C unit, a water station (“Usually we have more water, but I think I drank all the water that I usually have,” she said), and, most importantly, advertising: A six-foot tall image of Garcia’s face is plastered on the side next to the words GARCIA FOR MAYOR, turning it into a mobile billboard wherever she went.

And in a campaign where too many candidates competed for the attention of any New Yorker, the former sanitation commissioner-turned-sort-of-frontrunner was taking all the advantages she could get — and trying to squeeze as much A/C time as she could. Earlier that day, Yang had spoken with delight about how he’d hitched a ride to Manhattan on the Garcia-mobile. On Monday he debuted his own bus, the YANGATRON, along with a packed schedule of 14 events for the day.

As we zoomed down the FDR Drive toward the Staten Island Ferry, Garcia spoke with POLITICO about her unusual choice to campaign with her rival, explained her decision to withhold an endorsement and expressed her hope about the future of ranked choice voting.

“Ranked choice gives you an opportunity to do things collaboratively to promote voting,” she said.

POLITICO: OK, a lot of [Yang’s] supporters were super surprised in Queens. I was overhearing some guys going, ‘Oh, no, she totally screwed him over. But it was a total —

POLITICO: OK. Yeah, he didn’t seem as fazed and shocked by it as, I think, a couple of us were.

Garcia: You know, he knew. That was scripted.

POLITICO: What was the reasoning behind that strategy?

Garcia: It is really driven by, for us, how do we win this election? How do we get the votes? And ranked choice gives you an opportunity also to do things collaboratively to promote voting. And we’ve done things before. We did the press conference on the one city permit back when it was — it was a long time ago. I was cold, I was wearing a coat — I don’t remember exactly when it was, but I know that I was wearing a coat. And I actually tried to get, when I did the foster care policy, I actually tried to get all of the candidates to show up. I was like, how can we not all agree on this? Like, this is a super important issue, well to me personally, and I was like, why can’t we all come together? I mean, some of them put statements out. But they didn’t show up. I thought maybe they’d show up. I thought it would have been an interesting way to promote the positives of ranked choice voting.

POLITICO: I guess that if you think about it, you and Yang do have a very sunny attitude towards politics, which makes this sort of event kind of make sense for both of you.

Garcia: We actually do really want to do it. Because we actually care about the city. Like, not driven by, ‘I need a title.’

POLITICO: I’m surprised that the other candidates haven’t really jumped on this idea. Eric Adams — I think just said that this was like — I think someone’s talking to him just now. And he’s like, Oh, this is a stunt, a desperate stunt. I can find the actual quote, but it was something along that line.

Garcia: A desperate stunt? No, Eric, we’re winning. That’s your problem. And I think he’s surprised at all his traditional politics is not as effective,

[The Garcia Van passes by a man trying to parallel park] I don’t think that guy’s fitting in that space. I mean, I could be wrong.

POLITICO: A friend of mine just bought a RAV4. And he’s parking it in Brooklyn. Somehow he does it.

Garcia: Yeah. And I could parallel park that. I’m in Park Slope? I mean, literally, I live blocks from my mother and I lived there since [my son] Alex was one.

POLITICO: “Height of hypocrisy.” It looks like that’s what [Adams] said.

POLITICO: He says that Garcia was justifiably offended when Yang kept saying he is number two.

Garcia: That’s actually not what offended me. I’m fine with taking his number two votes. I was offended by the deputy mayor. I was never running for that, I was running for mayor. And in ranked choice, actually, if you don’t want to be the number one, you could be like, I don’t know, related to them. You got to vote for that person number one.

POLITICO: But I don’t really recall Eric Adams actively reaching out to campaigns to do something like this.

POLITICO: OK, I don’t know if any, has anyone asked you exactly how this specific van idea came into being? Because I am a fan of custom wraps. This is a lot.

Garcia: We always have the literature and the podium and all the other stuff you need to carry around. I can leave my bag in here! It’s very hard to campaign. This is one thing. All the women candidates have to pay attention to makeup and lipstick and all the men do not.

POLITICO: That makes sense for the air conditioning then. So you don’t melt.

Garcia: So you don’t melt. There was one day where they had me ride a bike and it was this hot. And I was just like, I’ve melted. I was like I don’t even know if I should bother trying to put more makeup on, because it’s just sliding off my face.

POLITICO: And then when people are like, ‘You can use that [makeup] fix it spray,’ that’s a lie.

Garcia: That’s a lie. It does not work. Not when it’s super super hot. The van has been fabulous.

POLITICO: What are the essentials you keep stocked in the van? Makeup, a Wi-Fi hotspot…

Garcia: And usually we have more water. But I think I drank all the water that I usually had. I went through like all of my bottles of water already today.

POLITICO: Seems like you picked up a lot of really good practical tips for campaigning. Anything different that you’ve learned in this process, then, that have shocked you or surprised you after working so long in city politics?

Garcia: Yeah, the political favors. The political favors really surprised me, because I also always had a job where you did the opposite. You never did a political favor. Because that would not be right. And you’re not treating everyone equally. But you find out things. I’m just not — I’m not — I can’t play that game. I wasn’t doing it.

Garcia: Like how some of the endorsements go down, or like, right now — The New York Post’s being basically the Eric Adams machine against me every single day.

POLITICO: The [New York Times] endorsement must have really helped you?

Garcia: Oh, yeah. It was amazing. And to me, quite awesome. I did the interview [with the Editorial Board.] It was on Google Meet. And I just get so little feedback from the screen. Like if we’d been in a room, I felt like I would know whether or not, Did they like me? Were they feeling very supportive? But I get nothing. So when I walked out of doing it, my staff is like, What do you think? I was like,Well, I made the case. But it’s a screen. I can’t tell if they were really positive or not. And we actually found out — we were doing debate prep, or we were supposed to be doing debate prep. And Nicole’s boyfriend texted it to her.

Garcia: So that was a good moment. That was one way to get out of debate prep. But I know Mara [Gay] just wrote a phenomenal, a phenomenal editorial. I felt it really captured me.

POLITICO: Going back to the cynicism of the favor trading and all that. I’m probably just a terrible burned out person who hates politics, but I think that was why I was a little bit like: ‘So Andrew’s giving you his endorsement for number two on his ballot. But you’re not necessarily saying, ‘Put Andrew Yang number two on your ballots if you’re voting for me.’

Garcia: Right. And which is actually consistently where both of us have been for this entire race.

Garcia: He’s been saying put Kathryn number two, and I’ve been saying, I’m not telling you who my number two is, and that I do want people to rank their [own] ballots for them.’