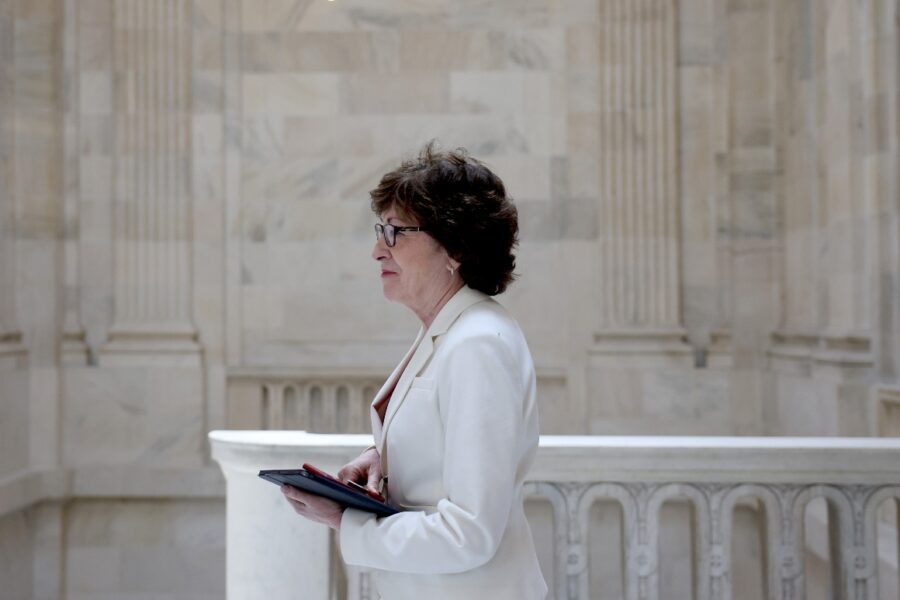 The Senate’s bipartisan group is racing to finalize an accord on infrastructure, hoping to clinch a deal totaling $579 billion in new spending as soon as this week.

The group of 21 senators, roughly evenly split between both parties, is sketching out its spending plan in far greater detail than previously reported, with a four-page breakdown circulating Capitol Hill and reviewed by POLITICO. But the effort is still a work in progress and several of the senators met on Monday night as staff work near-constantly to refine the numbers. The group will meet again on Tuesday.

“We’re continuing to work and flesh it out,” said Sen. Susan Collins (R-Maine), a key member of the group who had lunch with Commerce Secretary Gina Raimondo on Monday afternoon. “There’s a sense of growing optimism, that perhaps we can show our country and the world that we can come together on something that makes a real difference in people’s lives.”

There was no apparent breakthrough during Monday evening’s meeting, even as urgency increased. Sen. Jon Tester (D-Mont.), a moderate in the group, said the group is “very close” and could have a public agreement imminently. Many in his party are getting antsy as they approach the July 4 recess.

Details on how to pay for the proposal remain elusive, though the group has identified funding mechanisms for legislation that could total more than $1 trillion when new spending is included with the current transportation baseline. The White House has rejected proposals to gradually increase the gas tax alongside inflation as well as charge fees for electric vehicles. And Senate Budget Committee Chair Bernie Sanders (I-Vt.) on Sunday questioned such heavy reliance on public-private partnerships.

Senate Majority Whip Dick Durbin (D-Ill.), who has been involved with the bipartisan group, said he’s “heard exaggerated claims” about how much money the group can actually raise.

“The spending part is easy for Democrats to swallow,” Durbin said. “The pay-fors are dramatically different. The Biden approach used the corporate tax and income tax on wealthy individuals. The Republicans have a much longer list that I’ve seen one time. That raises a lot of questions.”

Details have remained scant other than an early spending breakdown from last week, and there’s been no public disclosure of the still-evolving talks as everything remains in flux. President Joe Biden’s trip overseas last week was an additional complication. The group could make an announcement on more details this week.

Biden met individually Monday with Sens. Joe Manchin (D-W-Va.) and Kyrsten Sinema (D-Ariz.). Biden told the senators he was “encouraged by what has taken shape but that he still has questions about the policy as well as the means for financing the bipartisan group’s proposal,” according to a White House official.

“The President also made clear that he is at the same time focused on budget resolution discussions in the Senate,” the official added. “And they agreed to stay in touch over the coming days.”

Sen. Shelley Moore Capito (R-W.Va.), who separately sought a deal with Biden, said on Monday that Biden’s increased engagement will be helpful “because he really wants the bipartisan deal.” But she also said the brushback from the White House to the bipartisan group’s proposed pay-fors “is the same pushback I got.”

“Pay-fors will be the big issue. As it was with me,” Capito said, noting the Senate is about to take a two-week recess. “We’re only here this week.”

The spending breakdown was circulated among the negotiating senators to help set up congressional committees who would begin drafting legislation, according to a source familiar with the negotiations. The source said the document on Monday is a “fair representation” of where things stand but the numbers are subject to change.

“We’re not trying to recreate the wheel here, we’re trying to be as respectful of the committee process as much as possible,” said Sen. Rob Portman (R-Ohio), a leading member of the group. “More than 60 percent of this bill has already been written.”

It also outlines bringing in pieces of a large Energy Committee bill that Manchin is working on to deal with abandoned mines, weatherization and power and climate related provisions.

Many of the top-line numbers include a more detailed breakdown of the proposed spending. For example, of the $360 billion for roads and bridges, $258 billion is for highways, $40 billion is for bridges and the rest is for transportation alternatives, federal lands and tribal infrastructure. Of that money, $110 billion represents new spending.

The group proposed spending about $830 billion, according to an outline obtained by POLITICO, which includes some current spending on highway programs. Altogether, the new spending is still set to total $579 billion and total spending is expected to clock in around $1 trillion or more, depending on the timeline of how the money is parceled out.

But not all of the spending figures are finalized, and some of those details may require more work among the group’s 21 supporters. Last week, the group swept up support of 10 Democrats and 11 Republicans, though many Democrats are hesitant to sign on without more certainty about how to fulfill the party’s other priorities.

Senators still need to refine how to pay for the bill. Republicans say any agreement must be fully paid for and not raise taxes. And negotiators now must replace the gas tax and electric vehicle fees they had previously discussed. Sen. Mitt Romney (R-Utah) said gas tax and electric vehicles fees represented less than 10 percent of the money needed for the bill. He said the group would either “find other places [for the money] or they’ll reject it and we’ll move in.”

Complicating things further, liberals are also pushing for commitments from their party leaders to pass a more sweeping spending package dealing with Democratic priorities like climate change and paid leave alongside a bipartisan deal.

Manchin, who is part of the working group, has not signaled yet whether he would commit to a package that only has Democratic support and would potentially contain trillions of spending for Democrats’ domestic priorities. Senate Majority Leader Chuck Schumer has Democrats on a “two-track” system, playing out the bipartisan negotiations while also preparing a possible party-line fallback plan under budget reconciliation.

Some on the left are already ready to bail on cross-aisle talks.

“I just don’t think it’s looking that great, so we should move to reconciliation,” said Sen. Mazie Hirono (D-Hawaii).

A pair of officials from Biden’s legislative affairs team reiterated the dual-track approach in a call with senior House Democratic aides on Monday, according to several people listening.

Shuwanza Goff and Louisa Terrell said they are looking at both a bipartisan bill and reconciliation option, while assuring Democratic staffers that the White House was committed to going big.

“We’re not going to waste our time,” Terrell said on the call.

Sarah Ferris and Laura Barron-Lopez contributed to this report.