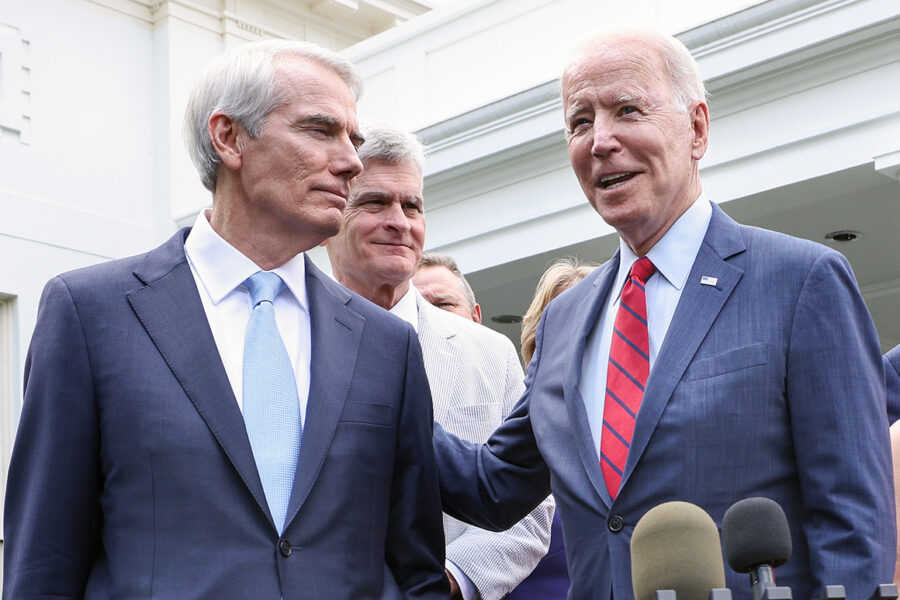 Senate Republicans who negotiated an infrastructure deal with President Joe Biden celebrated Thursday, then woke up angry on Friday.

The five GOP senators who cut a deal with moderate Democrats and the president are frustrated that Biden explicitly tied his signature on a bipartisan infrastructure bill to a separate Democrats-only measure, according to three Republican aides familiar with the dynamics. Biden has long said he wants to push forward both measures together, but Republicans viewed his Thursday comment as openness to vetoing the very same bill he’d just endorsed.

Members of the group in each party discussed the imbroglio on Friday afternoon on a call first reported by the Washington Post. Democrats were privately confident afterward that their Republican colleagues would stay on board and that their outrage would pass.

“Having spoken with several colleagues, I’m optimistic that despite some hiccups, the historic scope and widespread public support for this bipartisan infrastructure deal will keep it moving forward,” said Sen. Chris Coons (D-Del.), who has endorsed the deal and is close to Biden.

Biden said of the bipartisan deal yesterday that if this “is the only one that comes to me, I’m not signing it.” The president added that his support for the nearly $1 trillion infrastructure deal is contingent upon it passing “in tandem” with a bigger bill that’s shaped without GOP input.

Liberals have protested the bipartisan deal’s potential passage unless it is married with a spending bill running into the trillions and tackling climate change, prescription drugs, Medicare expansion and many more of the Democratic Party’s progressive priorities.

Republicans were always aware that Democrats might try and pass that bigger bill using the filibuster protections of the budget. Some in the GOP even suggested the two-step process, predicting that they could more easily scuttle a Democrats-only bill if that proposal resorted to tax increases to expand social programs.

Moreover, several Republicans recently shrugged off the possibility of a two-track approach as something they have no control over. But Biden’s clear vow to hold up any bipartisan infrastructure bill Congress passes until he gets the Democratic proposal done is viewed as a potential dealbreaker for these Republicans.

One aide said that clearly linking the two infrastructure bills was never discussed — not within the group of 10 senators who met Biden on Thursday, the bigger group of 21 senators who endorsed their work, or with the White House. A second aide said that frustrations run far deeper than Sen. Lindsey Graham (R-S.C.), who began griping publicly late Thursday.

“In endorsing the deal, Biden praised the group for ‘keeping their word,’ but then immediately broke his,” said a third Republican aide.

If the Republicans were to pull their support, it would yank the rug out from under Biden after his victory lap for bipartisanship. And it would leave Democrats to come up with their own proposal. In the White House’s view, top aides and Biden had been careful for months not to appear to aggressively put one set of interests over another, for fear of alienating either the left or the right.

The Democratic majorities in Congress have been pursuing a two-track approach for several weeks. Senate Majority Leader Chuck Schumer and House Speaker Nancy Pelosi have been emphatic that the bipartisan deal offering $579 billion in new spending would never pass without being paired with the larger, Democratic-only bill.

Pelosi can withhold passage of the bipartisan infrastructure bill on her own, and has vowed to do so to make sure the Senate approves a large bill via the budget reconciliation process that can skirt a GOP filibuster. And the White House defended Biden’s consistency on Friday.

“That hasn’t been a secret. He hasn’t said it quietly,” said White House press secretary Jen Psaki when asked about GOP griping over Biden’s comments on Thursday. “I will say that the president’s view is that the public, the American people, elected him to not lead on process but to get things done. The leadership of the House and Senate are going to determine sequencing and timing.”

Psaki offered “good luck” to Republicans who oppose the bipartisan plan because of the sequencing of the two bills. Republicans who would “vote against a historic investment in infrastructure … simply because they don’t like the mechanics of the process,” she told reporters, are making “a pretty absurd argument.”

The Republicans who met with Biden on Thursday were Sens. Rob Portman of Ohio, Susan Collins of Maine, Lisa Murkowski of Alaska, Bill Cassidy of Louisiana and Mitt Romney of Utah.

On Fox Business on Thursday evening, Cassidy seemed to throw his hands up at trying to influence how Democrats handle the process.

“I cannot control what Democrats do,” Cassidy said. “So I think we’ve made progress, even if Majority Leader Schumer decides to proceed with another reconciliation bill.”

Natasha Korecki and Maeve Sheehey contributed to this report.